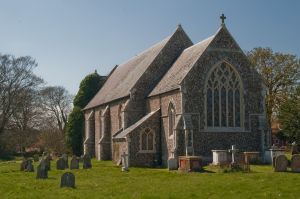 Alderton is an attractive village south of Orford, on the Bawdsey Peninsula, near the mouth of the River Deben. There's not a lot to the village beyond some cottages, a country inn, and the partially ruined church of St Andrew, set in an odd position tucked away behind the pub.

The most intriguing thing about the church is that the west tower is ruined, so the church bell is set upon a timber frame on the ground. The ruined walls of the tower are covered in ivy, making an unforgettably romantic picture. Apparently, the tower fell on a fateful day in 1821, killing an unfortunate cow wandering beneath.

The oldest part of the building is 14th century, with the addition of the 15th-century tower, though much of this earlier work was swept away in a major restoration in the Victorian period under the direction of AW Blomfield. So thorough is Blomfield's work that for all intents the church can be said to have been completely rebuilt under his direction.

The most attractive feature of the exterior is the medieval north porch, made of ashlar with flint and brick infill. Look closely and you can see a carving of a Suffolk woodwose, or wild man of the woods, carved on the porch exterior.

The aisless interior is large and spacious, almost hall-like, with a peculiar raised platform at the west end, like a school assembly hall. The only real relic of the medieval church is the much-worn piscina.

The church is close to Alderton Hall, a moated medieval manor.

An end-terrace cottage in the Gloucestershire village of Alderton, sleeping three people in two bedrooms.
Sleeps 3