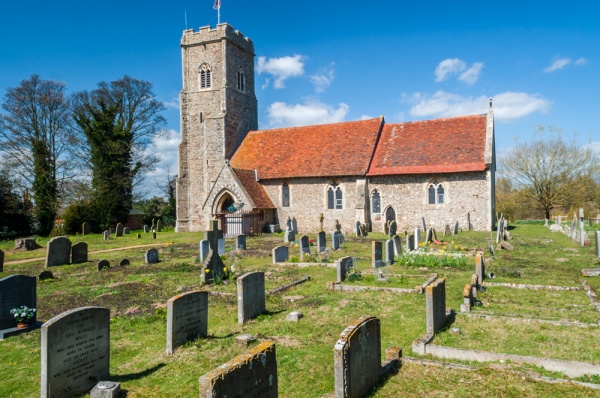 The pretty village of Shottisham lies in the area of Suffolk known as The Sandlings, on the east bank of the River Deben. The medieval parish church of St Margaret of Antioch stands on a hillock above the village, reached by a steep path off Church Lane.

The Domesday Book of 1086 mentions a Saxon church on this spot. That early church was probably built of timber, and no trace of it remains, but there appear to be Roman bricks incorporated into the later medieval tower. The tower parapet boasts a peculiar array of grotesque carved heads and gargoyles.

The present church is thought to have been built by the monks of Butley Abbey around 1313. The abbey was founded by Ranulf de Glanvill, who also established Leiston Abbey. The abbey was dissolved by Henry VIII in 1538 and the former gatehouse became known as Butley Priory, which is now a popular wedding venue. The Priory is located about four miles north-east of Shottisham between Capel St Andrew and Butley. 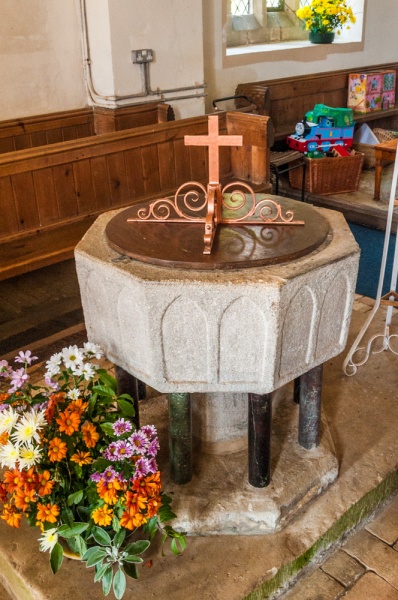 The nave and chancel are 14th century, but the Purbeck marble font is probably a century earlier. It is a beautiful example of Early English style, with an octagonal bowl decorated with double arches on each face, supported on eight slender pillars around a large cylindrical stem. The font stands on a chamfered step which may also be 13th century.

The church was heavily restored in 1867 by architect Edward Hakewill. The three-light east window is another Victorian installation, with scenes depicting the Ascencion, designed by the glassmakers Ward and Hughes of London, a firm best known for restoring the glorious east window of Lincoln Cathedral.

Aside from the font, the historic highlight inside the church is a memorial brass to Rose Glover, wife of the rector, who died in 1612. The brass shows a sunflower and a rose, presumably in honour of the deceased first name. The inscription reads:

As wither’d rose its fragrant sent retains, so beinge dead, her vertue still remains. Shee is not dead, but chang’d. The good ne’r dies, but rather, shee is Sun-like, sett to rise.

The rector's grief at Rose's death did not stop him remarrying and fathering a dozen children.

In the chancel is a sedilia, or clergy seat, formed by lowering the south window sill. You can still see the former rood loft staircase set into the thickness of the southern wall. Under the rood stair is a recess for a piscina, suggesting that there was originally an altar at the base of the stairs.

The altar table presents a problem. It fits the space perfectly, suggesting it was custom made. It is usually dated to the early Tudor period on stylistic grounds, but as the church guide leaflet points out, if it was intended as an altar it is more likely to be even earlier.

Also in the chancel is a beautifully carved parish chest. It is not dated, but the style of carving looks like 17th century to me. Beside it is a finely carved wooden chair, probably also 17th century.

At the west end of the nave, set into the tower wall, is a blocked sanctus window. This small opening gave a view of the altar from inside the belfry. It was blocked off on the outside when the roof was lowered during the Victorian restoration, but you can still see it on the inside of the church.

The dunes at Shottisham have been mentioned as the possible site where St Edmund, the boy king of the East Angles, was killed by Danes, though the Suffolk village of Hoxne probably has a better claim. 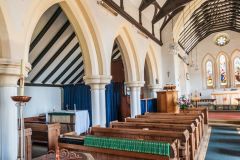 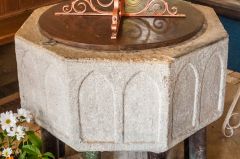 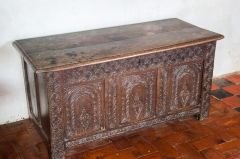 More self catering near Shottisham, St Margaret of Antioch

More bed and breakfasts near Shottisham, St Margaret of Antioch