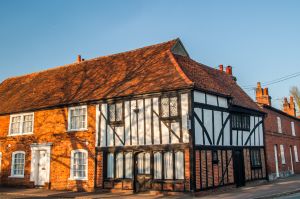 The town of Bures has a bit of a split personality. Half of it lies in Suffolk and half in Essex. The latter half is now known as Bures Hamlet and is now the larger. The smaller, and Suffolk based part, is technically Bures St Mary and lies on the north side of the River Stour. There is yet another, third Bures, called Bures Mount, just outside Bures Hamlet.

The oldest and most interesting historic building in Bures isn't actually in Bures, but just outside the town, at the top of the hill heading deeper into Suffolk. This is St Stephen's Chapel, an early 13th-century building which is some 150 years older than St Mary's church in the centre of the town. St Stephens Chapel was founded to mark the traditional spot where Edmund, the boy king of the East Angles, was crowned on Christmas Day, AD 855.

To reach the chapel, take the track through Fysh House Farm. There are wonderful views out over the valley of the Stour from the chapel, which houses some excellent medieval tombs of the de Vere family. Unfortunately, the chapel is rarely open, which is quite unfortunate as it is a really interesting medieval building.

But the church of St Mary's is, and what a good thing, for it is a wonderful historic church, dating to at least the 14th century. The most interesting feature is probably the Waldegrave chantry, with its ornate 17th-century monument to William Waldegrave. There is also a rare 13th-century effigy of a knight, carved in wood.

The church is surrounded by historic buildings; there are over 65 listed buildings in the town centre. Two footpaths converge in Bures; the Stour Valley Way and the St Edmund Way. This a lovely riverside town, well worth a ramble about.

Local legend, first recorded in 1405, tells of a scaly dragon, fearsome to behold, which terrorised local inhabitants. It is tempting to dismiss the tale as superstitious nonsense, but there might, a very slender 'might', be a germ of truth, and that germ goes all the way back to the Crusades. Richard the Lionheart was given a gift of a crocodile by Saladin. This he brought back to England and kept in the royal menagerie at the Tower of London.

The beast escaped, however, and eventually turned up in the north Essex marshes. Naturally enough the locals were terrified and drove the beast away. The neighbouring villagers in Wormington claim to have actually slain the beast.

Is there any truth to the tale? Who's to say, but it is interesting that several churches in the area have wall paintings of dragons or serpent-like beasts, including the churches at Wissington, Wiston, and Wormingford. 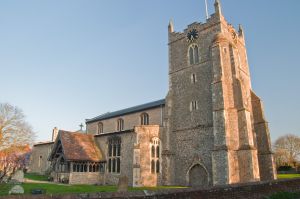 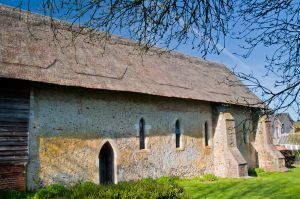 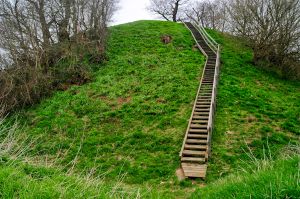 More self catering near Bures >>

More bed and breakfasts near Bures >>