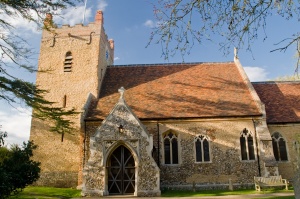 Located on the Essex side of the Dedham Vale, Wormingford's tiny 12th-century church of St Andrew is built of rubble and flint, mixed with Roman bricks. The church was remodelled in the 14th and 15th centuries and heavily restored in 1870. In Saxon times the church probably served double-duty as a lookout point, with views across the vale.

The door jambs and columns are heavily scratched with a variety of graffiti. Most of the graffiti is simple initials, but in the north aisle is a likeness of a deer antler. Even more interesting is the east window of the north aisle, where you can see a cockadrill, a sort of worm, or dragon, a reminder of Wormingford's version of the St George and the Dragon story. 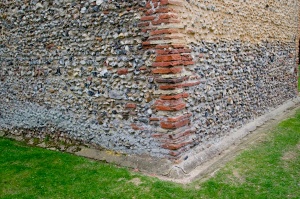 Within the tower arch is a 15th-century rood screen, moved here after the Reformation. Under the tower are memorial brasses set against the wall. These include the figure of a young man in a costume dated to about 1460. This man's identity is unclear, but it may be Thomas Bowden or Radus Rydale. Beside the young man is another set of three brasses, a Tudor gentleman flanked by women, presumably his two wives.

Fragments of 14th century stained glass have been set into the northeast and northwest windows of the chancel. The moulded chancel arch is also 14th century, as is a piscina and sedilia (the stone seat near the altar). The striking nave roof is a Victorian replica of the medieval roof it replaced.

The west tower of St Andrews is 12th century, built of limestone, but if you look at the quoins (the corner stones) you will see that they are built with reused Roman bricks. Large numbers of similar bricks in the area suggest that there was either a sizeable villa in the region, or that the Romans had a thriving brick industry at nearby Colchester (or both).

The tower windows are also built with Roman bricks. The tower rises in three stages to a brick parapet and pinnacles - in this case, the bricks are 17th century rather than Roman.

I'd call Wormingford's parish church interesting without being compelling. I very much enjoyed the medieval brasses, and the re-use of Roman bricks makes the church stand out as something out of the ordinary. 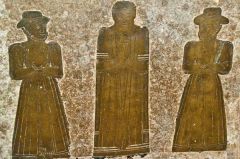 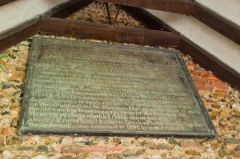 More self catering near Wormingford

More bed and breakfasts near Wormingford