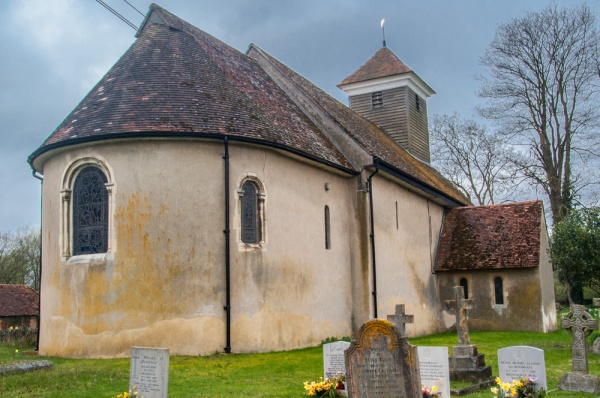 The beautiful little church of St Mary stands beside Wissington Hall, on the north bank of the River Stour, a mile west of Nayland. If the location is idyllic, so is the church, which boasts a finely carved south doorway, a Norman chancel arch and a well-preserved series of medieval wall paintings.

The parish is an ancient one; it is far older than neighbouring Nayland, with which it is now linked. Yet Wissington has always been a scattered parish, covering an area as large as 1500 acres, without a real village centre beyond the church and manor house.

We know there was a church here since at least AD 1135 when Robert Golbold, lord of the manor, granted it to the Cluniac monks of Little Horkesley in Essex. Initially, the monks may have sent one of their numbers to act as a parish priest, but by 1300 the tie between the Priory and St Mary's church was tenuous and the monks appointed a vicar to act in their stead. When the Priory was suppressed by Henry VIII in 1525 there were only two monks, and the gift of the living of Wissington passed to the Crown, who still hold it. 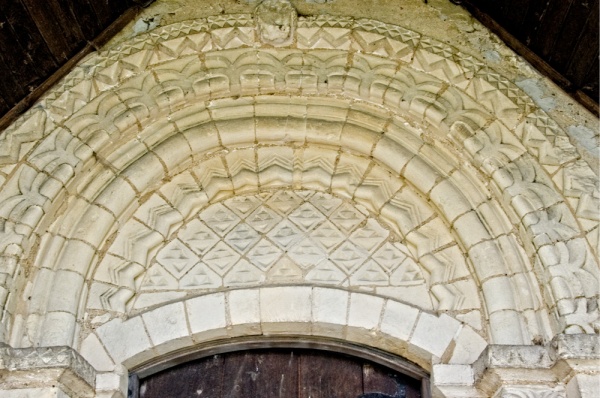 Most old parishes were controlled by one powerful family, but Wissington's church has been largely cared for by its parishioners for at least 700 years.

The church stands within a moated enclosure, beside Wissington Hall. It seems likely that the church was built either by the Gobold family or by the monks of Little Horkesley, for no evidence exists of an older building. Having said that, building work in 1991 revealed what appeared to be Roman bricks, laid in a herringbone pattern, at the base of the south nave wall.

The Norman church consisted of a nave, chancel, and rounded apse. The tower was built over the chancel, but the present tiny bell tower dates to 1722 and is at the west end of the nave. It holds a bell given in 1574 by Nicholas le Grys, inscribed with 'Fear God'. 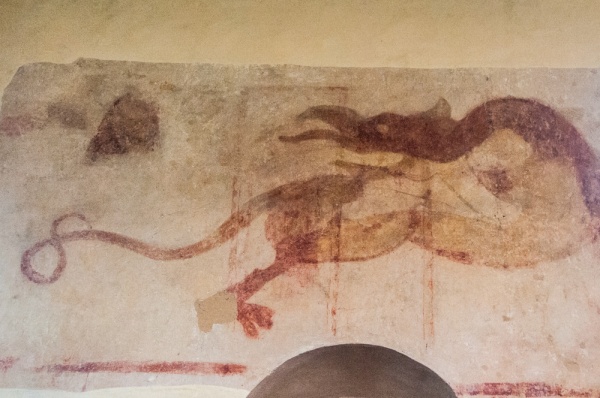 One of the finest features of the church is the Norman south doorway, with beautifully detailed carvings on the tympanum and lintels. To the right of the door is a restored holy water stoup. This was concealed within the wall for centuries following the Reformation. On the left lintel of the doorway you can see a pair of medieval scratch dials.

Every wall of the nave is decorated with 13th-century wall paintings, including one of the earliest depictions in England of St Francis of Assisi, who is shown feeding birds. The style of the paintings suggests that they were made by local craftsmen.

The paintings were done around 1280 and include a Nativity sequence. Curiously, the Nativity scenes are very similar to one found in Autun Cathedral in France, made between 1120-1146. It would seem that someone, perhaps one of the Little Horkesley monks, had seen the Autun paintings and attempted to emulate them here.

On the north wall is a late 14th-century painting of a very lively looking dragon, painted over an earlier scene. The very informative church guidebook suggests that the dragon may refer to a passage in the Chronicle of Henry de Blaneford of St Albans Abbey, written in 1405. The Chronicle reads:

'In these days there appeared lately an evil dragon of excessive length with a huge body, crested head, saw-like teeth and elongated tail in land near the town of Bures near Sudbury, which destroyed and killed a herd of sheep. The servants of Sir Richard Waldegrave who owns the land haunted by the dragon came forth to shoot it with arrows which sprang back from its ribs as if they were metal of hard stone and from the spines if its back with a jangling as if they were hitting bronze plates, and flew far away because its skin was impenetrable. Almost the whole county was summoned to slaughter it but when it saw that it was to be shot at again, it fled into the marsh, hid in the reeds and was seen no more.' 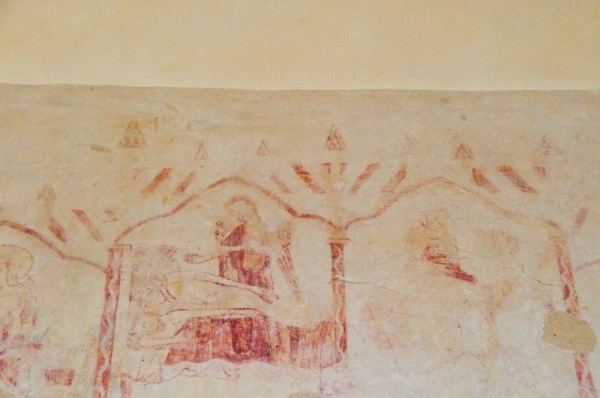 Art experts have determined that there are more medieval wall paintings hidden beneath coats of whitewash.

The windows retain a few fragments of medieval glass. Many Suffolk churches can tell sad tales of medieval glass windows destroyed by Puritan iconoclasts, particularly William Dowsing, who criss-crossed East Anglia in 1643-1644 in search of Papist iconography. Wissington seemed to have been passed over by Dowsing, but it was sadly not spared the good intentions of its Victorian vicar, Charles Birch.

Birch took office in 1832, at a time when St Mary's had suffered from the neglect of an absentee vicar. The church had been left to decay, and the vicarage was so neglected that it had to be rebuilt. Rev. Birch spent the rest of his life restoring St Mary's church. Unfortunately, part of his 'restoration' was to destroy the medieval glass and replace it with mock Norman windows. Birch carried on the Neo-Norman theme with a 'medieval' gallery, oak benches, and wrought iron decoration. 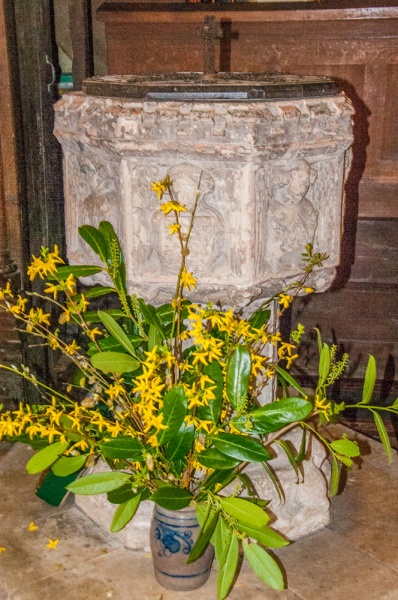 To be fair to Birch, the stained glass is very good, and includes the only window in Suffolk by the celebrated stained glass artists Thomas Wilmshurst and Francis Oliphant.

During his restoration work, Rev. Birch found the first of the wall paintings. Rather than reveal them he covered the paintings up again, for he feared they would distract his parishioners during services. The paintings remained covered until 1932, when they were 'discovered' once more.

An expert on medieval art named Professor Tristan was called in to study the paintings. Unfortunately, after he was finished he covered the paintings with a coat of wax. At the time this was thought to preserve the paintings, but what it actually did was seal the moisture in. The wax has carefully been removed from some of the paintings but more still needs to be done.

At the west end of the nave is a beautifully carved 15th-century font. The carvings are wonderfully made and depict a mix of Biblical and heraldic symbols. One heraldic shield depicts the coat of arms of England, another shows the Swynborne family, who held the manor at that time, and another shows the arms of the De Veres, who were related to the Swybornes.

Other carvings show an angel playing a stringed instrument, an ancestor of the guitar of today, while another angel plays a psaltery, another rare medieval instrument. The base of the font is carved with lions, in typical East Anglian style. 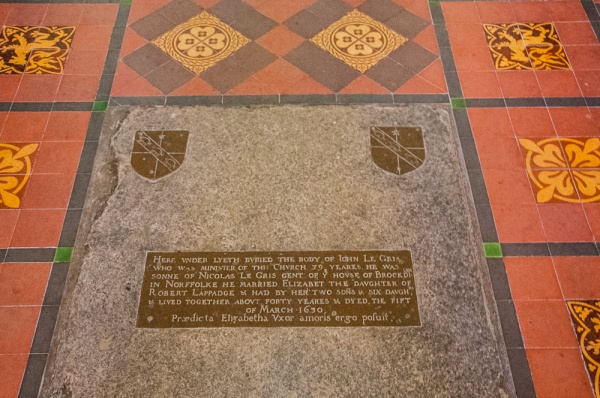 Behind the font is an unusual 19th-century barrel organ, and at the west end of the church are a pair of surviving 15th-century misericord seats. In the chancel floor is a grave slab commemorating John le Grys, a vicar from 1601-1630. His grave slab may have been made from part of the medieval altar slab, destroyed at the Reformation.

On the wall are the royal arms of George III, flanked by a pair of funeral hatchments, one to the Burman family of Smallbridge Hall, and the other to the Whitmore family of the Mill. Curiously, there are very few memorials, probably due to the Victorian restoration. Of those that remain the most interesting is a plain black stone in the centre aisle, dedicated to Arthur Sadler, gent., of London. Sadler owned Wiston Mill, but lived in London, so we can assume that he returned to his native East Anglia to die.

In the churchyard is the grave of Dr Jane Walker, one of the first female doctors to qualify in Britain, graduating from the London School of Medicine for Women in 1880. She established several sanitariums for sufferers of tuberculosis, where she pioneered treatment based around fresh air.

In 1987 the church was declared a monument of national importance and was taken into the care of English Heritage. It is usually open to visitors and was open when we visited. 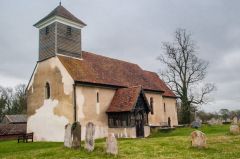 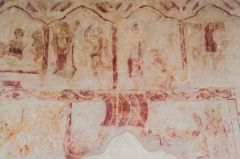 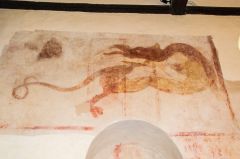