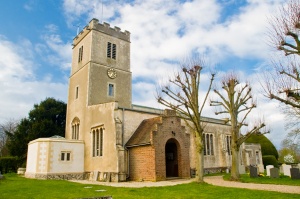 To say that St Peter and St Paul church in the Essex hamlet of Little Horkesley looks unusual is an understatement. I almost hurt my neck doing a double-take when I first glimpsed the church. It was not at all what I was expecting.

For a start, the nave, chancel, and tower are rendered, with the sort of finish you'd expect to see in an unremarkable modern house. The south porch stood out like a sore thumb with its stepped gable roof and red brick walls, and an odd chamber with whitewashed walls was attached to the tower like a garden shed. What on earth is this, I wondered?

'This' is a modern church, designed in 1958 by Duncan Clark and Marshall Sisson to replace a medieval building that was almost completely destroyed by bombs in World War II. What then, is it doing in a guide to historic churches in Essex?

There are two answers to that question; first, the church we see today replaces a church that was part of a 12th century Cluniac priory. More importantly, the modern church is home to a set of remarkable wooden effigies that were rescued from the medieval church when it was destroyed. These effigies, dating to the late 13th century, along with 14th and 16th-century memorial brasses, make Little Horkesley a must-see among historic churches in the county. 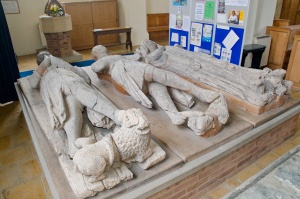 A Cluniac priory was founded at Little Horkesley around 1127 by Robert de Horkesley and his wife Bridget. The priory church was originally dedicated to St Peter, and then in 1190 the dedication was changed to St Peter and St Paul. It was only ever a small house, with 2-4 monks under a prior.

The priory was dissolved by Cardinal Wolsey in 1525 and the nave of the priory church converted for use as the parish church. The two easternmost bays of the nave then became the chancel of the new 'downsized' church.

So it would have been an interesting medieval building with features worth exploring, but all that was lost on 21 September 1940, when a German landmine, dropped from a bomber with a parachute, struck the belfry and exploded. The body of the church was completely destroyed and the explosion was so powerful that windows were blown out in Stoke by Nayland, over 4 miles distant.

Though much of the interior fittings were also lost, some were saved from the rubble or reconstructed. Among the latter are three remarkable 13th-century wooden effigies of the de Horkesley family. 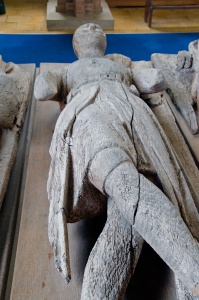 These striking effigies are thought to represent Sir Robert de Horkesley (d. 1296), his eldest son and heir Sir William de Horkesley (d. 1332) and the latter's his wife Emma (d. 1333). The larger figure (nearest the wall) has a blackened head, the head being lost beneath rubble for several years after the 1940 bomb. The style of armour worn by the knights and the woman's robe and mantle suggest a late 13th-century date.

The devastating effects of the 1940 bomb were not the first time these remarkable 13th century effigies have suffered. In 1717 the lord of the manor, Edward Husbands, reported that in 1661 his father had found them stacked atop each other on the ground.

Not surprisingly the lowest effigies were suffering from decay. They were brought inside the church and placed upright (perhaps to save space?). In 1876 they were laid in a recumbent position. 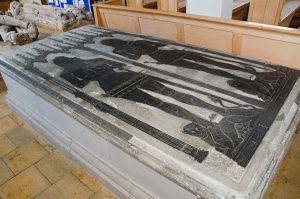 After the De Horkesley family died out in 1332 the manor was held by the Synbournes and the Fyndernes until 1617. Near the De Horkesley effigies is a large memorial brass to the Swynbourne family. This shows two armoured knights in beautifully ornate canopied niches.

Though the two knights died only 13 years apart, their armour is quite different, an indication of how styles changed even in that short time. It is also interesting to see how Sir Thomas's titles and offices relate to France; an indication of just how linked the medieval 'English' nobility was to France. Sir Thomas is also known to have served as Mayor of Calais in 1404. 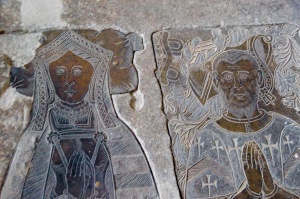 Set in a recess on the north side of the chancel is a memorial brass and grave slab of Bridget, Lady Marney, a member of the Waldegrave family of nearby Wormingford. Her first husband was Thomas Fynderne (other sources suggest the correct name is William) who died in 1523.

When Fynderne died Bridget married John, 2nd Lord Marney of Layer Marney Tower. Lady Bridget did not have much better luck with her second husband, who died in 1525. She left Layer Marney and returned to Little Horkesley, where she died in 1549.

Lady Marney left very specific instructions for her tomb; she did not want her own family coat of arms, only those of her two husbands. Her instructions were ignored, and the tomb displayed all three family arms.

With a certain poetic justice, the bomb damage in 1940 destroyed the Waldegrave arms that Lady Marney had not wanted on her tomb. Bridget is shown flanked by her two husbands, with Lord John, being of higher social rank, shown on her right. The inscription somehow survived the bomb without damage. It reads 'Here lyeth Dame Brygete Marney, late the wyffe of John Lorde Marney and sometime wyffe to Mr Thomas Fynderne Esquyer, and decessyd the XXXth day of September in the yere of our lorde God MCCCCCXLIX'.

When the Marney brass was rescued from the bombing rubble it was discovered to be a palimpsest, that is, it was engraved on both sides. The reverse shows a very large female figure, five feet long, dated to about 1490.

On the north of the Lady Chapel is an altar tomb, possibly part of a 15th-century Fynderne family tomb. Set into the floor by the tomb is a small memorial brass showing a naked woman wrapped in a shroud. This tiny brass is thought to depict Katherine Leventhorpe (d. 1502). Curiously there is no known connection of the Leventhorp family with the parish of Little Horkesley, so what is the brass doing here?

The church is normally open daylight hours. And you're likely to have the whole church to yourself - I certainly did. Yet this is a church I would happily revisit. The effigies are extraordinary, compelling medieval monuments. The later memorial brasses (especially the Swynbourne brass) are beautifully preserved despite the obvious bomb damage, and together with the effigies make Little Horkesley's unusual church a fabulous visit. 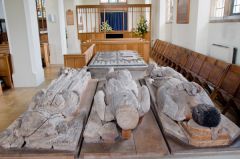 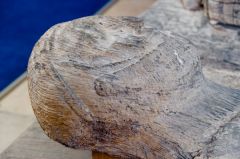 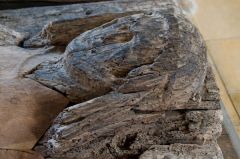 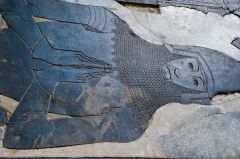 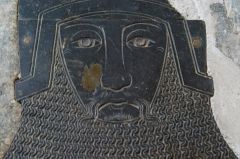 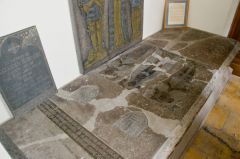 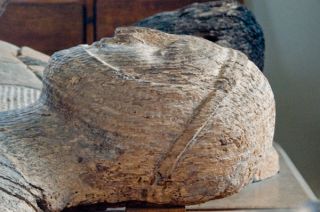 More self catering near Little Horkesley