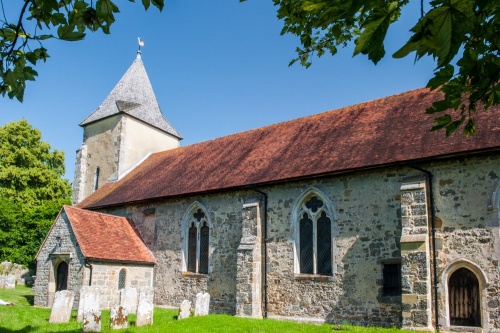 A Grade I listed church immediately beside the busy A272 west of Midhurst, St George's at Trotton is well worth a visit for its wonderful series of medieval paintings, memorial brasses, and the 14th-century Camoys tomb.

When you enter Trotton church the first thing that draws your eyes are the 14th-century wall paintings that cover the west wall and much of the north wall facing the entrance. Above the south door are further paintings, though these are more worn and indistinct.

The paintings on the west wall represent the Seven Deadly Sins and the Seven Acts of Mercy, flanking a figure of Christ in Judgment rising above a very large figure of Moses holding the Tables of Law. Below Moses is a large Consecration Cross. The colours on this group of paintings are wonderfully vivid even after 6 centuries or more.

Directly before the altar is a large 14th-century table tomb, topped with magnificent memorial brasses of Thomas de Camoys and Lady Margaret de Camoys. Sir Thomas commanded the left flank of the English forces at the Battle of Agincourt in 1415 and was awarded the Order of the Garter for his contribution to the English victory. He had a long and successful career as a diplomat.

Lady Camoys was the widow of Henry 'Hotspur' Percy and was the 'gentle Kate' mentioned by Shakespeare in his play, Henry IV. Interestingly, rather than portraying the couple in a typically pious pose with their hands in an attitude of prayer, the engraver who crafted these wonderful brasses shows them holding hands, a touching gesture. 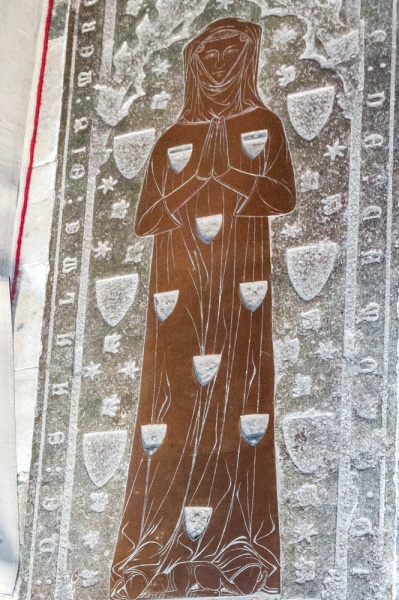 What is more, the engraver has left us a reminder of himself; his signature, a reversed N within a circlet, with a crescent, star, and mallet. This signature is thought to be unique in English brasses.

The Latin text on the Camoys brass reads in part, "Pray for the soul of Thomas Camoys, and of Elizabeth his wife, who was once Lord of Camoys, baron and provident councillor of the King and Kingdom of England and zealous Knight of the Garter."

This pair of Camoys brasses are considered some of the best in the south of England, but they are eclipsed in my eyes by the third brass, found hidden beneath protective carpeting in the chancel aisle.

Here you will find the full-length figure of Lady Margaret de Camoys, whose husband was captured at the Battle of Bannockburn in 1315. This is probably the earliest full-length brass of a female figure in England. It dates to around 1310 and shows Lady Margaret's costume in wonderful detail. 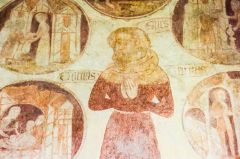 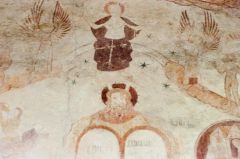 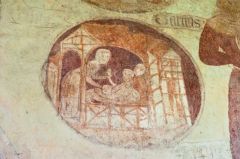 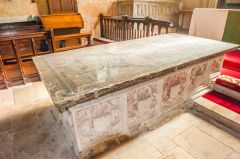 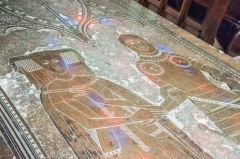 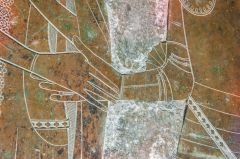