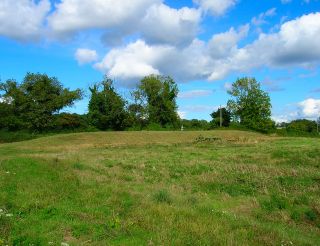 Bevis's Thumb Long Barrow
Bevis's Thumb is a Neolithic long barrow named after a legendary local giant named Bevis, Beavis, Baverse, or sometimes Bevis of Hampton. The 'Hampton' is thought to refer to Southampton, though Bevis is more often linked with Arundel, which is said to be named after his horse Hirondelle.

The old tales tell that Bevis worked as a warden at Arundel Castle, where you can still find Bevis Tower. Bevis ate an ox washed down with two hogsheads of beer every week and was said to be so tall that he could walk from Southampton to the Isle of Wight without getting his head wet.

According to legend, Bevis threw his sword from the parapet of Arundel Castle to mark the spot where he should be buried. The sword landed here at Bevis's Thumb.

Alternate versions of the story say that the sword landed in Arundel Park (where you will find a barrow known as Bevis's Tomb) or near Havant (where there is a long barrow called Bevis's Grave). In Arundel Castle you can see Bevis's broadsword, which measures 5'9".

The burial mound is an elongated barrow, rather the round barrows which are generally more common in the Sussex downlands. It measures 60m long and tapers from 16m at the western end to 9m at the eastern end (which has been cut through by a farm track). It varies between 1.6 and 1.8m in height.

Excavations in 1980 found several flint tools and animal bones in the ditch that outlines the barrow. The ditch also contained charcoal which was carbon-dated to the period 2500-2700 BC. To the south-east of the long barrow are several oval barrows that may have been built at the same time.

The site has also been called Solomon's Thumb, perhaps as an attempt to Christianise an ancient pagan site. It stands beside the bridleway leading to the summit of Telegraph Hill.