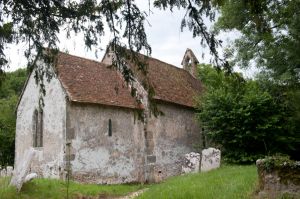 St Mary's is a late 11th-century church, probably dating from shortly after the Norman Conquest. We know that it existed in 1086, for it is mentioned in the Domesday Book of that year. The church was probably built on top of an earlier burial mound, in a wooded area near the River Rother.

Chithurst was not a prosperous place in the early medieval period; the church was granted an exemption from taxes by Pope Nicholas in 1291 because of its extreme poverty.

Murder of a Rector

Throughout much of its life, Chithurst must have been a sleepy place, but a note of high drama is sounded in 1757 when the rector, Rev John Denham, was stabbed and murdered. A man named Aps was tried at Horsham and convicted of the crime. He was hung, with a contemporary report saying that he ended "his wicked life without the least sign of repentance".

The nave and chancel of St Mary's are 11th century, with mainly 14th-century windows. The font is probably 12th century, with Elizabethan pews and 17th/18th-century altar rails. More intriguing than these interior features are a series of very worn grave slabs near the north wall of the church; these are thought to be as old as the 12th century.

Chithurst parish is linked to that of nearby Trotton, where the church is truly outstanding, with glorious medieval wall paintings.

A very simple country church - no particularly outstanding historic features, but a place of great charm and peace. 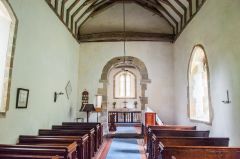 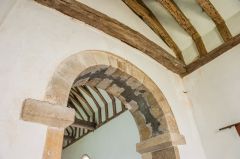 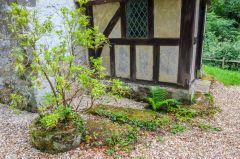 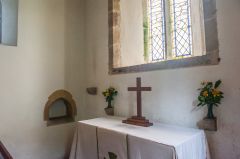