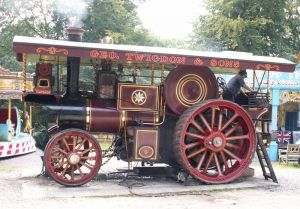 Hollycombe Working Steam Museum
What was it like to visit a fairground in the Edwardian era? A group of volunteers make it possible for the fairgoing public to experience a traditional steam-powered fairground, including narrow gauge and miniature steam railways. See rides dating from the 1870s in a lovely woodland setting.

The Hollycombe collection was begun in the 1940s by Commander John Baldock, who wanted to preserve steam-powered traction engines that were once such an important part of British life. To the early collection of traction engines, he soon added road vehicles, then expanded the collection to include fairground rides, and finally, steam railway equipment.

The collection grew so large in time that Baldock could no longer maintain it and keep it open to the public. In 1985 a charity group called the Hollycombe Steam & Woodland Garden Society was formed to run the museum, and they have continued to expand the collection ever since.

The museum features such a wide range of steam-powered engines that it is hard to know where to begin!

One of the main visitor attractions is a recreation of an Edwardian fairground, with rides dating to the 1870s. Included are roundabouts, a 1911 steam yacht thought to be the oldest in Britain, steam swings, and a 'Bioscope Show'; an early form of mobile cinema. Most of the rides are made of wood and brightly painted, and most, as you might expect, are powered by steam.

Then there is a farm exhibit, with steam-powered equipment including a threshing machine, ploughing engines, and a stationary steam engine used to power small machinery.

The museum also features two railways, one narrow gauge and one miniature. The narrow-gauge railway is based around a locomotive and track from Dinorwic in north Wales. The line runs for 1.5 miles and uses a 2'6" gauge. Most of the passenger coaches come from the Ramsgate Cliff Railway in Kent. The miniature railway uses an exceptionally small gauge of 7.25 inches and uses 4 different engines.

The museum maintains over 30 steam engines, though not all are on display at any given time, due to the high degree of maintenance needed to keep them operating. Among these are the traction engines that were the core of the original museum collection, plus 'showman's engines' used to power the fairground rides.

The most important of these is the 1895 'Emperor' engine built by the Burrell company, which is the oldest operating showman's engine in the world.

Hollycombe is open seasonally, so it's a good idea to check first with the official website before making travel plans.

The Granary Bed And Breakfast - 9 miles
Petersfield, Hampshire
From: £110.00