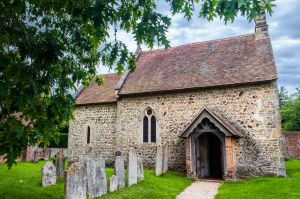 St James's is a lovely little country church in a beautiful setting near the River Rother. The church almost certainly dates to the late Saxon period, and there is obvious Saxon herringbone-style stonework on the outside walls of the chancel. The nave and chancel probably date to the mid-11th century or even earlier.

The highlight of Selham church is the intricately carved chancel arch; a wonderful example of Saxon architecture. The capitals on both sides of the arch are carved with fascinating details in a mix of geometric design and strange beasts. The north capital is intriguing; it was possibly plain when built, but shortly after the Norman Conquest it was carved in a mix of Norman and Saxon styles.

The font probably dates to shortly after the Conquest and is a simple tub-shaped favoured by the Normans. One of the carvings shows a five-pronged tool, which came into use in the Norman period, as opposed to the three-pronged Saxon tool illustrated on the chancel capital.

The south aisle is Early English in style (1190-1245), with a squint - an opening to allow those seated in the aisle to have a better view of the high altar.

Our verdict: a delightful church with fascinating Saxon and early Norman details. 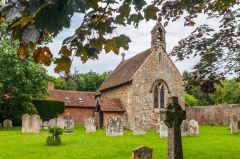 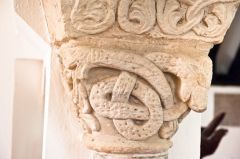