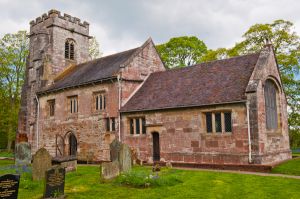 The first church here was dedicated to St James, but the current dedication is to St Michael. The church stands in a lovely wooded glade about 250 yards from the moated manor house at Baddesley Clinton.

The layout is simple, consisting of a west tower, nave, and chancel. The tower is worth noting; it was added around 1500 by the lord of the manor, Nicholas Brome, as penitence for murdering the local priest.

The story goes that Brome arrived home unexpectedly one day and surprised the priest in the act of tickling his wife under the chin. Brome assumed they were having an affair and slew the priest on the spot. He escaped punishment for murder with the aid of his powerful friends and was granted a pardon by the king and Pope.

However, to atone for his deed, Brome built towers for the church here and at nearby Packwood. These are known locally as the 'Towers of Atonement'.

Brome is said buried near the lintel, outside the south door, so that 'people may tread upon mee when they cone [sic] into the church....'.

Within St Michael's the most interesting historical feature is a gaily painted table tomb in the chancel. This is to Sir Edward Ferrers of Baddesley Clinton Hall, who died in 1535. The nearby east window has 16th century stained glass, with likenesses of Sir Edward Ferrers and Lady Constance, who paid for the window.

The chancel windows are 16th century, but there is a two-light 13th-century window in the north wall of the nave. The south doorway probably dates to the late 13th century also. The font is a simple 16th-century affair in an octagonal shape.

St Michael's is a simple church, but full of charm, and its proximity to the National Trust manor makes it a 'don't miss' historic church to visit. 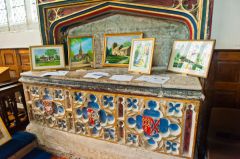 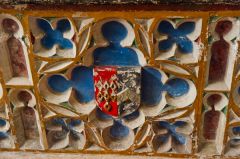 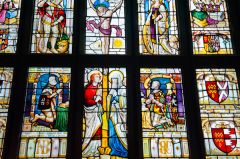