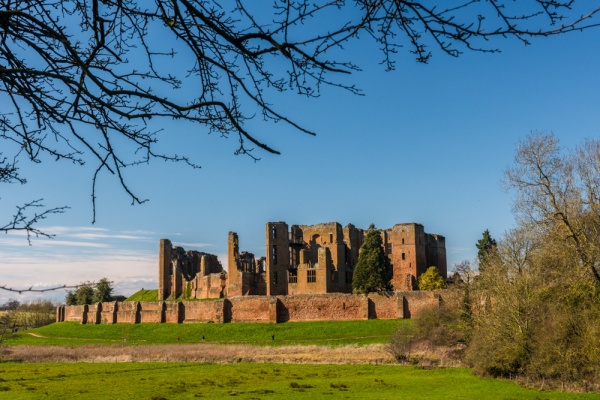 Kenilworth Castle was begun by Geoffrey de Clinton, Chamberlain to Henry I, in about 1125. Quite why Sir Geoffrey chose this obscure village location in Warwickshire for his fortress is anybody's guess. He constructed a strong central keep, with walls 20 feet thick, surrounded by a ditch and an outer earthen embankment.

Then de Clinton dammed two streams to create a large lake which fed a moat. Between the lake and the moat, Kenilworth was ringed with water on all sides. 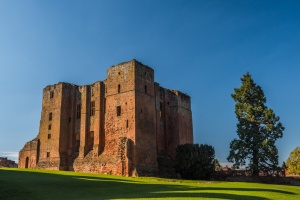 Geoffrey de Clinton also founded nearby Kenilworth Abbey, an Augustinian priory that once owned more churches than any other house in England.

De Clinton lavished money on his new creation at Kenilworth, and in the process made Kenilworth a little TOO powerful. In 1173 Henry II decided that he wanted Kenilworth for himself and confiscated the castle. In 1182 the de Clinton family were compensated for their loss with a much smaller property in Buckinghamshire.

After Simon de Montfort's rebellion in 1266, the castle was briefly held by his son. Henry III besieged Kenilworth for six months, and the garrison only surrendered when it was decimated by disease and starvation and there were no longer enough healthy men to fight.

Kenilworth was used for tournaments throughout the medieval period, being one of only 5 licensed venues in England. The area of the tiltyard where the jousting took place still exists in the castle grounds. 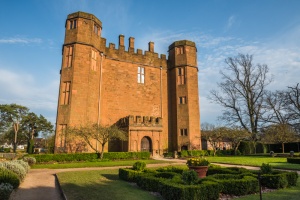 Over the years a succession of royal owners added to the castle. In the early 13th century King John built a curtain wall and towers. In the late 14th century, John of Gaunt (Duke of Lancaster and son of Edward III ) built a lavish Great Hall, used for lodging, meals, and entertainment. At the time, Gaunt's hall had the widest roof span in England.

Later still, Robert Dudley, Earl of Leicester and favourite of Elizabeth I, added the large residential block now known as the Leicester Building, overlooking the lake.

When Elizabeth visited here in 1575, Dudley spared no expense to entertain her. He spent 60,000 pounds, an enormous sum in those days, on elaborate celebrations. The queen was welcomed by the "Lady of the Lake", floating on an artificial island in the middle of the waters surrounding the castle. This royal visit formed the basis of Shakespeare's play, "A Midsummernight's Dream", and the novel "Kenilworth", by Sir Walter Scott. 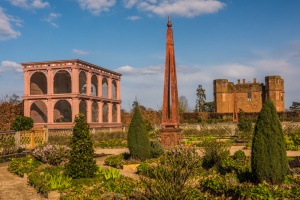 After the Civil War, Oliver Cromwell ordered the moat drained and part of the walls destroyed so that Kenilworth could no longer be used as a military strongpoint.

Today only the Leicester Gatehouse is habitable, and the rest of the castle is a glorious ruin, though thoroughly accessible to visitors. English Heritage took over operation of the castle in 1974, and under their auspices, the fine Tudor stable block was restored to house exhibitions on the castle and its history.

The Elizabethan gatehouse was restored and now is home to a display on Robert Dudley and his relationship with Elizabeth I, including portraits of both, sculptures, and an early edition of Sir Walter Scott's novel, Kenilworth, with a hand-written letter by the author.

The centrepiece of the castle experience is a carefully restored Elizabethan garden. The garden takes as its inspiration a record of the entertainment prepared by Robert Dudley for Elizabeth I in 1575. An eye-witness to the event recorded his impressions in exacting detail, including a description of the garden.

English Heritage has meticulously recreated the 16th-century garden, with a Renaissance fountain of white marble at the centre, surrounded by geometrically designed garden areas set off by low box hedges and an aviary at one side.

Our family has visited Kenilworth several times, and each time I come away awed at the sheer scale of the castle and its defences. This surely was one of the most impressive fortresses in England in its Tudor heyday, and even in a partially ruined state, it is amazing.

Kenilworth is open all year and is one of English Heritage's flagship properties. 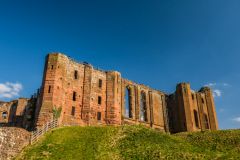 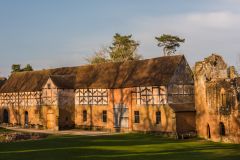 More self catering near Kenilworth Castle