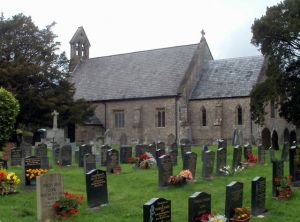 Goetre, St Peter's Church
There has been a church on this site since the early 1500's. The early Gothic church was dismantled in the mid 1800's and rebuilt in the Early English style, with the medieval chancel roof surviving. There is a Norman font and an ancient oak chest.
History
The first written record of a church at Goetre comes from 1348, though very little of this medieval building remains. Only in the south porch can you see any medieval stonework, though even this seems to have been moved here from another location. The entrance arch to the porch appears to be medieval, and there may be more old stonework in the chancel. The chancel roof may be medieval, replaced on top of rebuilt walls.

In 1846 the medieval building was completely replaced by a new church designed by TH Wyatt and D Brandon, under the direction of the rector, Thomas Evans. The church has hardly been altered at all since this early Victorian rebuilding, making it an excellent example of Victorian Gothic style.

At the west end of the nave is a gallery supported on a pair of slender cast iron columns. Atop the gallery sits an 1886 organ that blocks the west window. The interior furnishings are Victorian, with one notable exception, a Norman font set upon a 19th century base. The font is decorated with semi-circles and rope-moulding.

During the 1846 rebuilding the medieval vestry was moved to the south side of the nave, but the Victorian s left behind the vestry's carved mouldings and dressed stone on the west wall. In the churchyard is an ancient yew tree roughly 40 feet across. A pair of alms dishes (not usually on display) are thought to come from a yew tree over 1000 years old.

The most interesting monument is a memorial on the south chancel wall to Col. Henry Bird (b. 1780) who served under the Duke of Wellington in the Peninsular War.

A Victorian Spat
Rev Thomas Evans, who prompted the church rebuilding, must have had an obstinate streak. He fell into dispute with a local woman named Mrs Waite, who did not send her children to the church school run by Evans, but to another school nearby. He retaliated by refusing her the right to draw water from a well on his land. Villagers objected, and Evans responded by having the well filled with stones. The villagers removed the stones, so Evans had the contents of his privies emptied into the well. The rector then hired navvies to erect a cairn over top of the well, with over 1000 tons of stones. The villagers, watched by policemen, removed the stones, and Evans finally gave in.