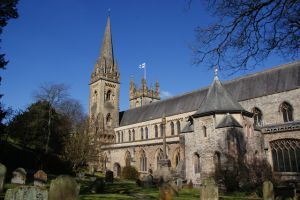 Llandaff Cathedral
Llandaff Cathedral boasts some of the finest medieval architecture in Wales. The cathedral was founded by Bishop Urban in 1107 on the site of a 6th century monastic church established by St Dyfrig. The interior of the church is dominated by a modern sculpture bearing Christ aloft, designed by Sir Jacob Epstein.
History
Llandaff Cathedral glories in one of the longest dedications of any British church. Its full dedication is The Cathedral & Parish Church of SS Peter & Paul, Dyfrig, Teilo & Euddogwy. The last 3 Welsh saints tell a lot about the cathedral's roots in the mists of time.

Dyfrig was a 6th century Christian who founded a monastic community near a ford across the River Taff, on an old Roman road. When Dyfrig died the community was ruled by Teilo, and then by Teilo's nephew, Euddogwy. The three saints are commemorated by the three mitres on the cathedral's badge. The only remnant of the first Celtic church is a cross standing near the chapter house doorway. Another reminder of the pre-Norman church is the ruined Bell Tower, detached from the church itself.

The Medieval Church
In 1107 Bishop Urban rebuilt the Celtic church in grand style, creating the impressive west front that is one of the finest medieval pieces of architecture in Wales. Urban also had Dyfrig's remains brought to Llandaff from Bardsey Island. The church was extended in the 13th century, when the Lady Chapel and chapter house were built. In the 15th century Jasper Tudor built a north-west tower to replace the earlier Bell Tower. The cathedral was badly damaged during Owain Glyndwr's rebellion in 1400, when the Bishop's Palace was destroyed.

Throughout the Middle Ages the church was largely financed by revenue from pilgrims coming to the shrine of St Teilo. The stream of pilgrims dried up after the Reformation, though you can still see the tomb of St Teilo in the sanctuary. As a result, the church fell into decay; the nave was a ruin, and services were held in the Lady Chapel.

In 1722 the 12th century tower collapsed, and was not replaced until the late Victorian period. The cathedral was partially restored in 1734 by John Wood, who created some of Bath's most impressive architecture. A comprehensive restoration took place in the late 19th century, and another major rebuilding took place after bomb damage in World War Two, giving us the cathedral church we see today.

Among the historic highlights inside the church is the tomb of Sir David Matthew (d. 1484), who was named 'Grand Standard Bearer of England' after he saved Edward IV's life at the Battle of Towton in 1461. I mentioned St Teilo's tomb, but other burials include Bishop John Marshall (d. 1496), and the cathedral is also the supposed burial site of Oudoceus, 7th century Bishop of Llandaff.

More self catering near Llandaff Cathedral >>