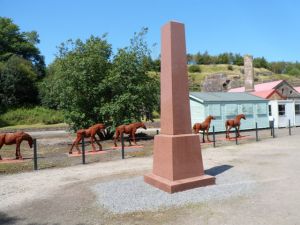 Blaenavon Ironworks
The best preserved example of an 18 century ironworks in Western Europe and centre of the Blaenavon World Heritage Site, nominated by UNESCO. The Ironworks retains its original furnaces, cast houses and restored ironworkers' cottages.
History
The ironworks at Blaenavon opened in 1789. The ironworks were an ambitious project, built by a trio of industrial entrepreneurs from the West Midlands, banded together under the name of Hill and Company. The ironworks cost GBP 40,000 to build, an enormous cost for the late 18th century. For the time period the new works was a technological marvel, on the very cutting edge of industrial technique for extracting iron from ore.

A stream engine provided the necessary blast, and the three furnaces were fuelled by coke. Over 350 men were employed, and within a few years the works were producing 4000 tons of pig iron. Technological improvements in the early 19th century meant the site could output over 14,000 tons of iron by 1812. The population of the surrounding town ballooned, and the economy of the surrounding area boomed - at least for the mining companies!

The Ironworks is best thought of not as a single site but as an industrial landscape; an area of historic industrial production based on the extraction and processing of iron ore. During its heyday in the 19th century Blaenavon was one of the largest and most important centres of iron production in the world.

The Ironworks retains much of its historical equipment and provides a rare glimpse into 18th century industry and the lives of the people who worked here. This is without question the best-preserved 18th century ironworks in Europe. Blaenavon's importance as an industrial site was recognised by UNESCO, which named it a World Heritage Site in 2000.

The site is complete with cast houses, a water balance tower, calcining kilns, a cupola furnace, iron furnaces, and ironworkers' cottages. Located inside the cottages is a modern visitor centre that explores the history of ironmaking and the Blaenavon site. There are scale models of the ironworks and the surrounding industrial areas. See a reconstructed company shop, and learn how iron was made and how important iron production was to the Industrial Revolution and the world's economy.

The popular television series 'Coal House' was filmed at Blaenavon. The series depicted the hard life of a mining family living in the Stack Square Cottages. A local history exhibit shows how mining families lived in the 19th and 20th centuries. A visit to Blaenavon can be combined with a trip to the popular Big Pit (National Mining Museum of Wales).

More self catering near Blaenavon Ironworks >>