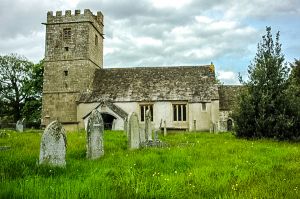 Llanover, St Bartholomew's Church
St Bartholomew's church dates to the 12th century, with the addition of a 14th century tower. There is a 6th century preaching cross in the churchyard, and a 13th century font inside.
History
The first church at Llanover was built around 1150. The name describes the location, as Llanover probably comes from Llanddfwr, meaning the Church by the Waters, a reference to the large number of springs in the area.

When the Normans conquered Cwent in the 12th century they rededicated the church to St Bartholomew. In 1295 the Lord of Abergavenny, John de Hastings, gave Llanover Church to Llandaff.

The earliest part of the building is the 13th century nave. From the same period is the font, decorated with symbols of wheels and cable moulding, and a band of daisies, a symbol of fertility. The area around the font is richly panelled with pieces of 16th century pews. These belonged to the Prichard family of Ty Uchaf house in Llanover.

The Prichard arms can be seen on the back of the old pew sections. A local legend suggests that there was a secret passage from the church to the Prichard home at Court Farm, where they lived before moving to Ty Uchaf. There is no obvious evidence of such a tunnel, but of course that doesn't mean it isn't there!

The Prichards were an influential family, and 2 of their members served as Sheriffs of Monmouthshire. There is a brass commemorating William Prichard and his son Mathew (d. 1610), and another brass to Water Rumsey, who was born in 1584. Rumsey was a judge and supported the king in the Civil War. This led to him being removed from office during the Commonwealth, but reappointed by Charles II after the Restoration of the monarchy.

The rood loft stairs are 14th century, and near them is a medieval piscina set low into the wall. In fact, the piscina is so low that it suggests the original floor must have been considerably lower than it is now. Most of the pews are marked with names of farms in the parish.

The chancel arch is 16th century and there are oak altar rails dated 1700. Over the arch is an unusual royal coat of arms, with the Lion and the Unicorn emerging from a skewed Garter Shield.

The south porch is medieval, with a reused 14th century grave slab as the threshold. The slab is incised with a cross and a recessed circle. This has been suggested as the burial marker for St Gofor. There is a stone tablet over the porch entrance with the date 1750 but this refers to a re-roofing of the church not its building date.

The tower is 14th century, and there is a sundial set on the south wall.

In the churchyard are the remains of a 6th century preaching cross. The stones that make up the cross base are said to have originally formed part of a stone circle.

Big Ben
Even more prominent in the churchyard is the tomb of Sir Benjamin Hall, Lord Llanover (d. 1867). Hall was the very first Minister of Works, and the famous hour bell in the Clock Tower of the Houses of Parliament is dubbed 'Big Ben' after Hall. Perhaps more importantly, Hall championed the rights of the Welsh to hear services in their own language. His wife Augusta is credited with originating (or at least, popularising) the concept of the Welsh National Dress.