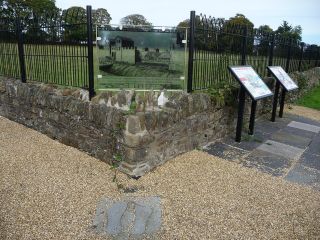 Gelligaer Military Station
When the Romans finally managed to subdue the Silures tribe of southern Wales in the late 1st century AD they built a military fort on a high plateau just north of modern Cardiff. The fort was in use until about 120AD.
There are outlines of a bank enclosing a rectangular area some 174m x 128m. The bank is up to 12m wide and 0.3m high. A second, smaller fort was built in stone to the south of the first fort, at the same time or slightly later. This was garrisoned throughout the 2nd century.

After that time it was no longer used for military purposes, but must have had an official purpose, for it continued to be occupied until the departure of the Romans in the 5th century. Both forts are on the same north-east alignment, and were connected by some form of earthwork defence.

The fort was surrounded by a civilian settlement, and remains of cremated remains have been found nearby.

There is very little to see today of the earlier fort beyond faint traces of earthworks, but you can see the stone walls of the second fort with interpretive panels explaining the history of the site, what the fort looked like, and how it was used.