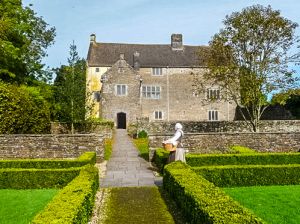 After his visit loyalties were switched from the King to Parliament. The house was built circa 1530 by Colonel Prichard's great grandfather and is a good example of a semi-fortified manor house of Tudor times. The parlour is panelled in oak. There are candlelight ghost tours in the winter months.

The house at Llancaiach Fawr was built in 1530 by Dafydd ap Richard, on the site of an earlier medieval house. It is typical of a fortified manor, built as much for protection as for comfort. Since the property was meant to repel attack there is only one entrance, through a perimeter wall.

The manor walls are 4 feet thick, with extremely steep spiral stairs within the thickness of the walls linking floors. The house was designed so that it could be divided in two, with the east part completely separate from the west. If an attacker captured the west part of the house the defenders could retreat to the eastern part and close the division. It is this Tudor defensive feature that makes Llancaiach Fawr Manor unique and important historically. 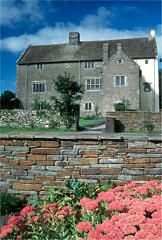 As the 16th century gave way to more peaceful times, the family extended the house, replacing the mural stairs with a grand staircase. The rooms themselves were made more comfortable and impressive with oak panelling, a sign that the Prichard's were rising in wealth and status. Several of the mural stairs and passages were sealed off, so that now there are more windows visible on the outside than on the inside of the house! At the same time a series of pretty formal gardens were laid out around the house; another sign of more peaceful times.

In 1642 Colonel Edward Prichard was named Commissioner of Array, making him responsible for raising money and soldiers for the Royalist cause across Glamorganshire.

Charles I visited in 1645, as part of a whirlwind tour of the area to rally support. The visit failed, for Pritchard and many other local gentry switched allegiance from the King to Parliament, and Colonel Pritchard himself helped hold Cardiff Castle against the king's men.

Llancaiach Fawr has been restored to the way it would have looked in 1645, at the time of the king's visit. Most of the furniture and furnishings are replicas, but they are based on originals, many of which can be seen in the Museum of Welsh Life at St Fagans, near Cardiff. The gardens retain their 16th and 17th century appearance, with a knot garden, orchard, and a physic garden for growing medicinal plants.

Llancaiach Fawr Manor has been named one of the top 10 most haunted buildings in Britain. Odd noises have been heard, peculiar scents are in the air, and spectral figures are frequently reported. One ghostly figure is a 19th century housekeeper, who is often seen and heard in the bedroom where she died. The ghost of a small boy is seen and felt in an upper chamber where he fell to his death, and a man in deep thought, perhaps the ghost of Colonel Prichard mulling over his switch of allegiance from king to Parliament?

Museum: Voted Best Family Attraction in Wales, Llancaiach Fawr shows what life was like at the time of the English Civil War (1645). Visitors can dress in period costumes and try out authentic crafts. There is an ongoing program of events aimed at making this troubled time "come alive" for visitors.