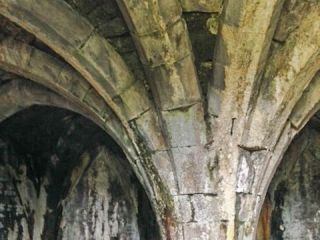 Morlais Castle
On the summit of a high limestone ridge in the Glamorgan uplands are the remains of an unfinished castle built on the site of an Iron Age hillfort. Round keep, towers, cistern, and miscellaneous building fragments exist along with a complete ground floor with its vault.
The origins of Morlais Castle are somewhat obscure; it was built about 1288 by the lord of Glamorgan to guard the frontier of the commotes (administrative regions) of Senghenydd, which they had just captured. It was sacked by rebels in the newly conquered territories in 1294, and it seems never to have been rebuilt. The castle site consists of a huge walled enclosure, measuring about 130 metres by 60 metres, with several strong towers set into the wall.

On the westward side the hill falls away in a steep scarp, providing natural defences. Huge round towers, about 20 metres diameter, stood at the south and north ends of the enclosure. The vaulted undercroft of the south tower survives. Chambers built within the tower walls can still be seen, in addition to a large cistern carved from the solid rock.

The great court is enclosed within a wide (15 metres across) ditch carved into the rock. To the south is an outer court within earthworks.

More self catering near Morlais Castle >>