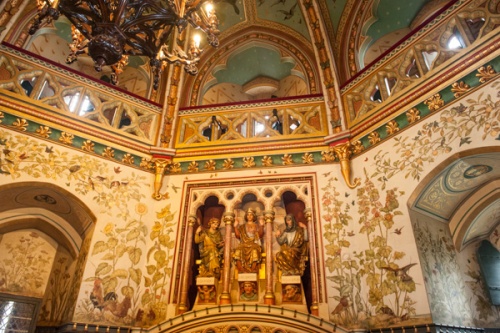 Castell Coch is a Victorian fantasy castle built by William Burges for the Marquess of Bute. The result is outstanding 19th-century architecture and design with rich decorations that are a feast for the eye. There is more to Castle Coch that a Victorian vision of Gothic romance, however, for Bute's fantasy is built on the foundations of a legitimate medieval fortress.

The first castle here was built in the 11th century during the first wave of conflict between the native Welsh princes and the Norman invaders. Like most Norman fortifications it consisted of little more than a wooden palisade atop a mound.

Like so many castles in southern Wales, Coch passed in time to the powerful de Clare family (see Caerphilly Castle), who erected three huge stone towers (the Keep Tower, Kitchen Tower, and Well Tower) by the end of the 13th century.

Castle Coch was badly damaged in the early 14th-century Welsh uprisings and it fell out of use. By the middle of the 16th century, the antiquarian John Leland recorded that it had become ruinous. It might have remained so if it were not for the wealthy and eccentric 3rd Marquess of Bute.

Bute hired architect William Burges, who was also responsible for another, even more extravagant, Bute fantasy at Cardiff Castle. Burges began work at Castle Coch in 1875. He died 6 years later, but the work was completed by his workmen. Together they created an extraordinary idealized Victorian vision of a medieval castle in richly decorated Gothic style.

Castle Coch is now in the guardianship of Cadw, Welsh Heritage. 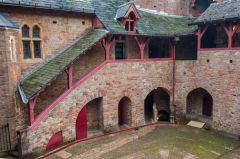 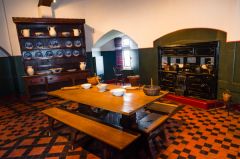 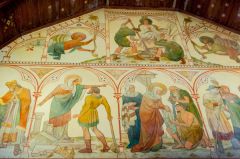 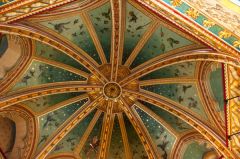 More self catering near Castell Coch >>