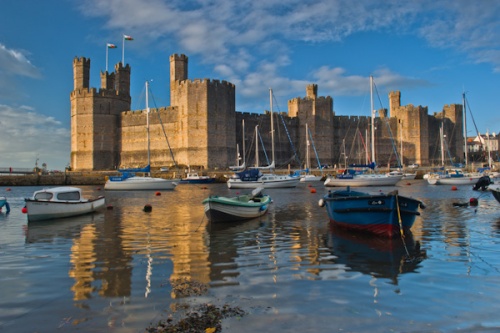 Part castle, part royal palace, Caernarfon is the birthplace of Edward II, later declared the first Prince of Wales by his politically astute father. Opulent accommodation (for the time) is provided within two curtain walls.

Why was it Built?
The castle, part of Edward I's plan to control the Welsh nation, was built on the site of an earlier motte and bailey fortification. It was to serve the purpose of governing the area and at the same time, be substantial and palatial enough for a king to visit. 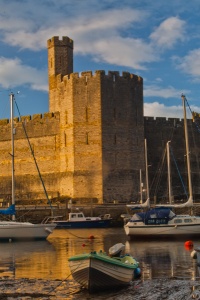 Caernarfon Castle stands on the north bank of the River Seiont, looking across the Menai Strait to Anglesey. The Romans built a fort on the hill above the river mouth, and the Welsh settled at Caer Seiont. The 10th-century manuscript 'Historia Brittonum' says that Emperor Constantine the Great was buried at Caernarfon.

The link is emphasized in a medieval Welsh biography of Gruffudd ap Cynan, where Caernarfon is called Constantine's city. Another, earlier, Welsh story called the 'Dream of Macsen', tells the story of a princess of Caer Seiont named Elen, and the Roman emperor who loved her.

In 1088 the Norman Earl of Chester built a motte and bailey castle by the river mouth, but the Normans could not keep the native Welsh at bay, and the Welsh captured the castle. For the next century, Caernarfon was in Welsh hands.

All that changed in the late 13th century, When Edward I embarked on his ambitious plan to subdue the Welsh. He built a string of castles along the north Wales coast to control the native population, and he saved perhaps his finest castle for Caernarfon.

But Caernarfon was intended, right from the start, to be more than just a castle. Edward was determined to avoid the mistake of his Norman forebears; he would build not just a castle, but a town, and invite English settlers to inhabit his new creation. 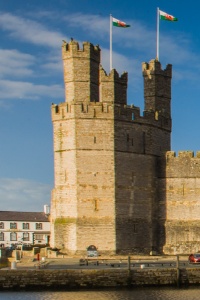 In 1283 Edward began to build his new castle at Caernarfon, incorporating the Earl of Chester's earlier motte. Edward was undoubtedly aware of the site's importance in Welsh culture, and it can have no accident that a body discovered during building was loudly proclaimed to be that of 'Maxen'; that is, Magnus Maximus, who served as emperor of Gaul in the late 4th century AD. In one stroke Edward tied himself and his new fortress with an ancient Welsh hero.

The engineer for the first phase of the new castle was Master James of St George, who oversaw most of Edward's castles in north Wales and is undoubtedly the foremost military architect in early medieval Europe.

The First (English) Prince of Wales

It was not long before Edward's new castle was to play a major role on the stage of history; in 1284, while the castle must have been little more than a construction site, Edward's queen, Eleanor, gave birth to a son, Edward.

In a ceremony full of symbolism, the king presented the infant prince to the conquered Welsh lords as their new prince. The child was named 'Prince of Wales', a title last used by the Welsh themselves for one of their own Llywelyn ap Gruffudd, in 1267. He was also called Edward of Caernarfon, another mark of the importance the city held in both the Welsh and English consciousness.

When the king's eldest son, Alfonso, died in later that year, Edward, Prince of Wales became heir to the throne and the title of Prince of Wales has been born by the heir ever since. 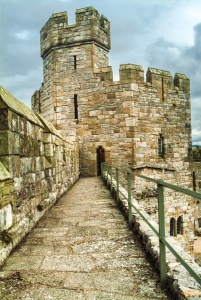 The castle and planned town were built with quite astonishing sped; the town walls were finished by 1289. Then, as often happens with major construction projects, the money dried up, and in any case, the Welsh were temporarily at peace, so construction on the castle was delayed.

Then in 1294 Madog ap Llywelyn rebelled, and his soldiers seriously damaged the town and castle before the rebellion was crushed. Edward saw the wisdom in finishing his castle, and work was resumed, carrying on until 1330. By then the castle had already cost the royal treasury some 25,000 pounds, but even then, Edward's ambitious plan was never completed.

The castle withstood Owain Glyndwr and his French allies during the 1405 rebellion. It did not fare so well in the English Civil War, being captured and recaptured several times before finally surrendering to Parliament in 1645.

Though much of the castle fell into ruin by the 19th century, some parts were still used, thanks in part to repairs by Sir Llewelyn Turner, a deputy constable and successful local merchant. Thanks to Turner's repairs, David Lloyd George was able to stage a massive ceremony proclaiming Edward VII's son as Prince of Wales in 1911. A similar ceremony in 1969 saw Prince Charles proclaimed Prince of Wales at Caernarfon. 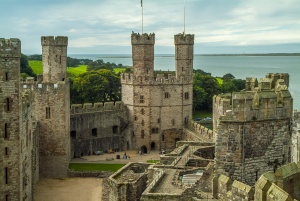 Looking across to Eagle Tower
and the outer ward

The plan of the town and castle was determined by the geography of the riverside site, on a small neck of land between the rivers Seiont and Cadnant. Edward's engineers dug a ditch around the castle and town, accessed through King's Gate, an amazing construction, with an internal chapel, 5 doorways and no less than 6 portcullises. Attached to King's Gate is a prison.

The castle is laid out like an hourglass on its side, with two large wards, and a curtain wall punctuated with 10 towers and two main gatehouses plus a pair of postern gates, and all joined to the very impressive town walls. Facing the Menai Strait on the seaward side are two extremely strong towers; Eagle Tower, with a postern gate and a partly-built Watergate, and to the south is Queen's Tower, controlling access to the River Seiont.

You can climb to the parapet level in several places, and get amazing views over Caernarfon itself, which really does drive home just how Edward's engineers laid out the planned town on a regular grid system. You can also get wonderful views across the Menai Strait to Anglesey and east towards Snowdonia. Caernarfon truly is an amazing piece of medieval construction, and it is no wonder that the castle and town have been maned a World Heritage Site.

The castle is constructed with angular rather than round towers. The 10-sided Eagle Tower and the Queen's Tower are the most elaborate. 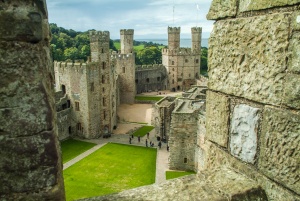 Looking across the inner ward

There are a number of exhibitions, an AV program and historical exhibits in the castle, which is also home to the Welsh Fusiliers regiment museum.

I've been to Caernarfon twice, the first time with our whole family, including two young children. To say that the children loved the castle is an understatement. It was heaven for them, with narrow passages climbing this way and that through the walls like a honeycomb.

The views from the parapets are stunning, especially if the light is decent, and it really helps you see the full extent of the castle laid out before you. It really is amazing what Edward and his engineers managed to create, though I don't imagine the native welsh were quite as favourably impressed!

One piece of advice I would offer; to really appreciate the castle, the best view is from across the river, where you can see not only the impressive bulk of the fortress but the amazing extent of the Edwardian city walls that still stand.

You can access the far side of the river two ways; the long way is to stroll around the end of the quay and back up the far bank, but the far shorter way is to cross a wonderfully picturesque little pedestrian footbridge below the Chamberlain Tower. The bridge pivots on its axis to allow boats to pass through the river channel.

More self catering near Caernarfon

More bed and breakfasts near Caernarfon

Accommodation
Self Catering in Gwynedd


More self catering in Gwynedd