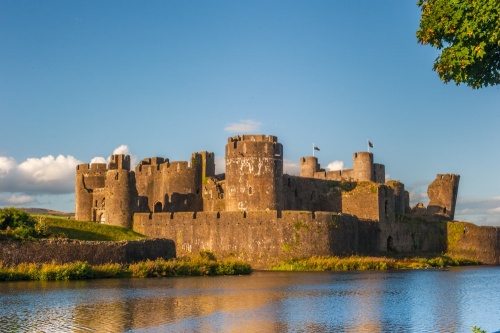 Caerphilly, covering 30 acres (12.2ha), is one of the greatest surviving castles in the medieval Western world. It was a highpoint in medieval defensive architecture with its massive gatehouses and water features, and is the first true example of a concentric castle in Britain. Caerphilly was built by the powerful Earl Gilbert de Clare, beginning in 1268. So successful was de Clare's design that it was used as a model for Edward I's castles in North Wales.

Gilbert de Clare's mighty fortress was not the first on this spot. Long before the arrival of the Normans, the Romans built a fort about 1200 years before de Clare embarked on a project that would create the largest non-royal castle in Britain. To get some idea of the scale of Caerphilly, consider that the Tower of London would fit within its outer walls two times over, and the Edwardian castles of Harlech, Beaumaris, Caernarfon, Conwy, and Rhuddlan would all fit within the 30-acre site.

What prompted Gilbert de Clare to create such a huge fortress? For the answer, you have to look north. In 1258 Llewelyn ap Gruffudd, ruler of the north Welsh kingdom of Gwynedd, was named Prince of Wales by his fellow Welsh rulers. Llewelyn moved south from his power base in the mountains of Snowdonia and took control of Breconshire.

The Norman lords of south Wales saw this Welsh advance with alarm. De Clare moved north himself and seized the territory of Gruffudd ap Rhys to create a buffer between Llewelyn and his possessions in Glamorgan. In 1268 he began work on Caerphilly to protect his lands from the Welsh threat.

Llewelyn did not sit idly by; he attacked the castle and demolished de Clare's work. However, his attention was distracted by the incursions into Wales of Edward I after 1272, and de Clare was free to continue his mighty new fortress. 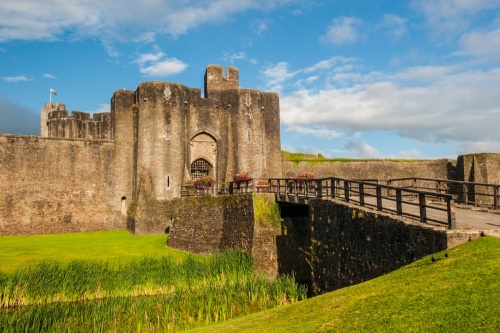 After the death of Llewelyn, the Welsh military threat diminished, and Caerphilly's defensive capabilities were not essential, so it became an administrative centre for the huge de Clare lands. De Clare died in 1295 and his son, also called Gilbert, finished his father's ambitious plans so that the castle was essentially complete by the time of the second de Clare's death at the Battle of Bannockburn in 1314.

The castle passed to Gilbert's sister Eleanor, wife of Edward II's favourite, Hugh le Despenser. In 1316 the castle was attacked by Llewelyn Bren, but Despenser promptly had the Welsh leader put to death. Hugh le Despenser was responsible for rebuilding the great hall at Caerphilly, with the help of the king's own master mason and carpenter.

Despenser and Edward II stayed at Caerphilly while trying to escape rebellious barons angered by the favourite's influence over the king. Both favourite and king were eventually killed, and Caerphilly passed to Eleanor le Despenser. It remained in Despenser hands until the 15th century until it passed by marriage to Richard Beauchamp, Earl of Worcester, and eventually to the Herbert family of Pembroke.

Stone from the castle was taken to rebuild stately homes in the area, including Y Fan, home of the Lewis family, who leased the castle.

Caerphilly, a decaying relic of the Middle Ages, was too uncomfortable for a family residence and was left to moulder away until the Victorian Bute family coal money rescued and restored the castle. An informative Castles of Wales exhibition is located in one tower. Working replicas of siege engines are on the grounds. 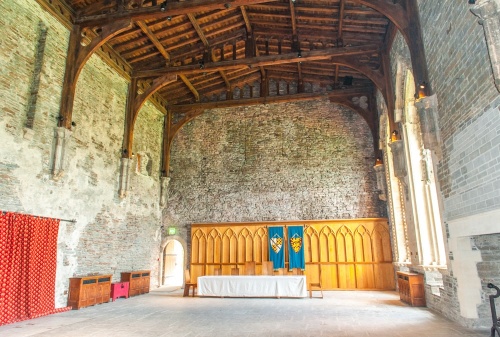 Caerphilly stands on a low island, surrounded by a curtain wall. The design consists of an inner ward with round corner towers, with a twin-towered gateway giving access to the outer ward. The outer ward is pierced by an imposing gatehouse, added in 1270. The gatehouse may be modelled after an earlier gatehouse at Tunbridge built by de Clare's father, Richard.

The gatehouse acted as a separate entity, capable of being defended independently of the castle. This feature was an innovation for the time and predated similar features in Edwardian castles in the north of Wales. 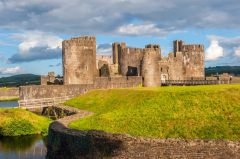 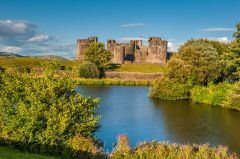 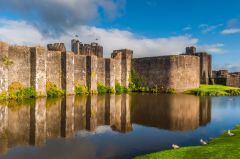 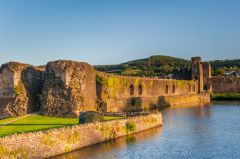 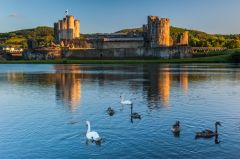 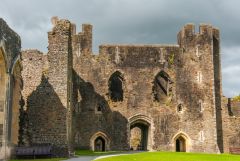 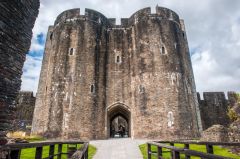 More self catering near Caerphilly Castle >>