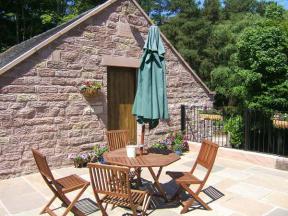 Sleeps a maximum of: 3

The Annexe is a detached single storey property next to the owners' home in a rural setting near Upper Hulme, less than five miles from Leek. The cottage has a king-size double bedroom, a single bedroom, a shower room and an open plan living area with kitchen, dining area and sitting area. Outside is off road parking for three cars, and a front patio with furniture.

The Annexe makes a wonderful base for enjoying walks from the door, as a peaceful romantic retreat or as a base for exploring the area, including Buxton, Alton Towers and more.

Terrible stay!
Really disappointing stay. I don't usually leave poor reviews but this experience warrants it. We felt like we paid a lot of money for this cottage for what we were met with. We arrived on the Friday night to find the cottage extremely dirty and damp: The bed sheets clearly had not been changed and were covered in stains and hair The rug in the kitchen was soaking wet, the sofas were covered in a layer of damp The plates and pans in the cupboards were covered in dried on food The surfaces were greasy and grimy All towels, tea towels and body towels smelt very bad, of sick in fact. Clearly had not been washed. Second bedroom - down the side of the bed was sopping wet This would all be bad enough but when we tried to resolve the issues by texting the owner, Lorna, on the Friday evening, we were met with extremely poor customer service. She came round the next morning in a foul mood and was extremely hostile towards me and my friend. We simply tried to explain the issues to her in a polite and friendly manner but she began shouting saying we simply ?had a different of opinion?. She wouldn?t let us get a word in edgeways and was very intimidating. We did not wish to ruin our weekend so agreed to staying a second night if the property could be cleaned with the beds changed. We specifically asked for replacement towels as the ones we had were not clean. We came back from a lovely day in Leek (Leek is absolutely beautiful) to find one bed changed, however the property was still unclean with the the other issues unresolved. We were not given fresh towels. This was all such a shame given Leek is an absolutely stunning place. we will definitely return but NOT to this cottage. Do not waste your money!!!
emmagM4722NX
2020-02-22

End of an era?
We stayed at Hen Cloud Cottage in October 2016. The cottage itself was nice, tastefully decorated and had all the amenities we required. Well, almost. It was starting to look a little tired around the edges. In the bathroom the shower head was cracked and leaked, the extractor fan didn't really work (the owner had supplied a dehumidifier to run just outside the door after use), fittings were broken, etc. The kitchen area was good, but again there were niggles: The extractor fan hood light didn't work, and a few more pans would have been useful (we cooked there nearly every day due to dietary requirements) The heating system was good, and kept us toasty during our very autumnal stay. The hot tub was fun, but the lid was almost impossible to lift the lid as the gas-assist was broken. As mentioned previously, access to the property was up a very bumpy farm track, so if you don't have an all-wheel drive vehicle be prepared to take it very slowly. However, the scenery was stunning and the area was full of great places to visit, so the bumpy drive every morning was worth it! I did get the impression that it's the end of an era for the cottage though. The owner was a little rude and uninterested when we spoke to her (we had to ask for some bedding for the single bed, and had to go to her house in person as we had zero mobile signal and so couldn't ring her. When I jokingly mentioned the lack of phone signal she responded "Well, that's not my problem is it") which was a shame as previous reviewers had sung her praises. However, as the For Sale signs were up outside I think it was just a case of the business winding down after a good run. All in all, a very pleasant cottage that could do with a lick of paint and a freshen up - which I hope the next owners do as it really is a wonderful place.
MrNevla
2016-11-09

The cottage is well located, it feels very isolated, but was actually not too far to get to pubs and shops. The conservatory on the front was a lovely sun trap and I enjoyed reading in there. The overall cleanliness, decor and comfort was outstanding and the automatic gate was very convenient!
Mrs Inglesant
2016-06-14

Warm, cosy, romantic cottage in an idyllic setting - perfect after a stressful week
We visited the Hen Cottage Annexe this weekend (late Nov 15) and stayed for two nights. The setting is wonderful (the track leading up is bumpy but not a problem at all) and the cottage is set in the hills. It's ideally situated for exploring in the Peak District, it feels out in the middle of nowhere (which is exactly what we wanted) but equally Leek is only 4 miles away and Buxton only around 10. The cottage itself is clean, comfortable, spacious, with nice roof windows and it's a perfect romantic getaway whether you want a base from which to explore, or somewhere to just relax (we did a bit of both). The heating is also really effective (not an exciting point(!) but if you travel in the winter the cottage retains heat really well and warms up to be really toasty very quickly if you've been out for the day. Lorna, the owner, is really friendly and cakes and milk were available on arrival which was a really nice touch. I would recommend this to anyone, it's a really nice place.
Chris K
2015-11-29

Had a fantastic 3 night stay at the cottage, will definitely be returning. The hot tub was amazing.
Mrs Unitt
2015-11-14

Details
Gas central heating
Electric oven, gas hob, microwave, fridge, washing machine, TV with Freeview, DVD, WiFi
Fuel and power inc in rent
Bed linen and towels inc in rent
Cot
Off road parking for 3 cars
Front patio with furniture and private hot tub
Sorry, no pets and no smoking
Shop 3 miles, pub and tea shop 1 mile
Note: Property is accessed via a 500-yard track, care to be taken
Note: Cottage accessed via 5 steps up to patio
Note: Hot tub is only suitable for children aged 10 years or over and they must be supervised
Note : Hot tub is to only be used between hours of 10am and 10pm
Please note - this property has a good housekeeping deposit of £200

Get an Ordnance Survey map covering the Upper Hulme area.