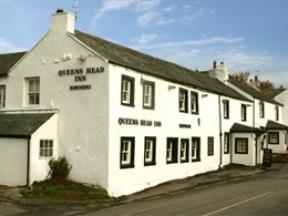 The Queen's Head Inn set in the centre of the village of Tirril, which nestles on the edge of the Lake District National Park, is the epitome of an English Country Inn.

Originally built in 1719 the Queen's Head has been in use as a Pub since that time gathering over the years all the bric a brac, memorabilia and character you would expect from an age old Inn. Typical of Cumbria's buildings, the Queen's has sturdy two-foot thick stone walls keeping it cool in summer and holding in the heat of the roaring real fire in winter. (With Lakeland's notoriously changeable weather it is neither uncommon, nor unwelcome to find yourself sat in the inglenook fireplace in June appreciating the blaze.) If you are sat in the fireplace take the opportunity to look up and you can see the original meat hooks for smoking meats still in place ? although not all of them - as local legend has it some are missing due to the unceremonious arrival of a plumber in the bar, who had shortly before been working in the airing cupboard above!! The Queen's Head being run in the best traditions of an Inn, offering Real Ales, excellent food, a warm welcome and a cosy stay.

The nearest train station is Penrith.As Wordsworth described this area of the Lakes himself it is "The loveliest spot that man hath ever known.", Tirril is nestled on the edge of the Lake District, two and a half miles from Ullswater, one of Lakeland's most majestic lakes. The Queen's Head is only 2 miles from the M6 and A66 ideal for exploring further afield to the Eden Valley, North Yorkshire moors ? of the Brontes and Heriot country fame or even Hadrian's wall and the Scottish Borders. Closer to home we have as an area of prehistoric interest, the barrows of Long Meg and Arthur's round Table as well as Mayburgh Henge and Castle Rigg stone circle or the Cockpit above Ullswater.

The Romans built their famous road of High Street through the village from London to their important town of Carlisle. Penrith castle, Brougham castle, Appleby and Brough castles all tell their tales of the regions warring past.

Dining Facilities
Relax in our cosy dining room, where traditional home cooked food is prepared daily. From a hearty full cooked breakfast that will set you up for a day on Englands highest peak, to braised shoulder of Lakeland Lamb in its own red currant gravy, the best of traditional British food is always available.

Get an Ordnance Survey map covering the Penrith area.


We've 'tagged' this accommodation to help you find related historic attractions and learn more about major time periods mentioned in the description.

More about these Historic Time Periods: