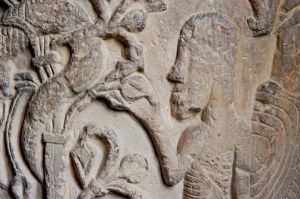 The tiny church of Cowlam stands in a farmyard, far from what is left of its former village. The village itself was depopulated gradually over the centuries until all that is left today is a few farms and clustered houses at the nearby Cowlam Grange crossroads.

St Mary's is a 'Sykes Church', one of many in this area of the Yorkshire Wolds to be restored by Sir Tatton Sykes and his son (also called Tatton) during the mid 19th century. In this case, the church was rebuilt to a design by Tatton Sykes I's daughter, Mary E. Sykes, in 1852.

The restoration swept away much of historic interest in the church, but one historic feature remains and makes up for all else. That is the font, an exceptional Norman creation in tub shape, covered with rare and beautiful carvings.

The Cowlam font is dated to around 1135 and is carved in vertical panels arranged around the slanting sides of the tub, separated by arcaded columns. The subject matters of the panels are varied and seemingly unrelated. 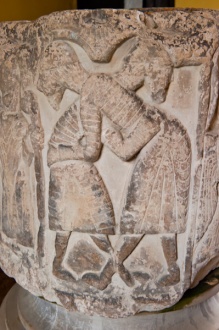 One remarkable panel depicts the Massacre of the Innocents, one of only two such depictions on a font in England. It shows Herod seated on a throne, a sword across his knees, while a soldier with a drawn sword stands beside him. The soldier's sword is Scandinavian in style, which is interesting given the Scandinavian presence in Yorkshire before the Normans arrived.

Another panel shows the Adoration of the Magi, with three kings standing before Mary, who sits with Jesus on her knee and holds a lily.

One fascinating panel shows two men with their arms about each other. This is interpreted in the church guide as a scene showing the twins Jacob and Esau reconciled to each other, but at first glance, it seems more likely to be a pair of men wrestling. Other interpretations include the Gemini twins from the Zodiac or Good wrestling with Evil. It's a mystery and an intriguing one.

Another beautifully carved panel shows Adam and Eve in the Garden of Eden. A sinuous serpent coils around a tree, and presents an apple to Eve (who looks remarkably like Adam). Adam is easily distinguished by his clearly carved ribs.

Other panels show a bishop with his crozier. The crozier is facing the bishop, which according to traditional medieval symbolism would indicate that he was the bishop of Cowlam's diocese. A final panel shows a figure of a woman in a long, flowing gown, who may be St Mary, to whom the church is dedicated.

The quality of the carving on the Cowlam font is sumptuous, and the effect is even more powerful when seen in this small, seemingly forgotten little church. A similar Norman font can be found at Kirkburn.

NB. Even if the roadside sign says that the church is open you may still have to fetch the key from Manor Farm, immediately beside the site.