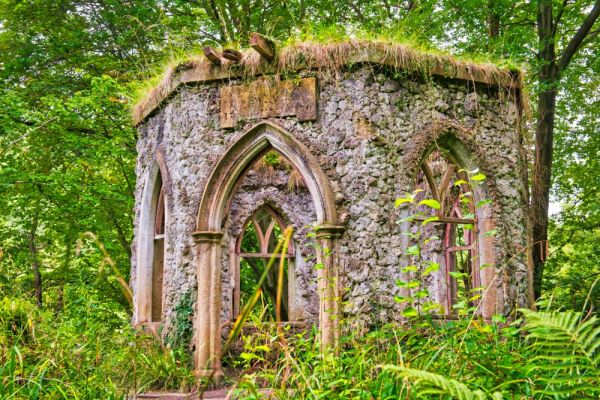 Hackfall Wood, near Masham, Yorkshire, is a picturesque 18th-century landscape garden laid out across a wooded ravine. Winding trails lead through the woods, linking a series of romantic follies, grottos, pools, and fountains arranged as focal points. The woodland garden was created by William Aislabie, owner of the famous Studley Royal water gardens and Fountains Abbey. It covers 120 acres (47 hectares) of ancient semi-natural woodland rising above the River Ure about three miles west of Masham.

The story of Hackfall goes back to at least the 11th century. The Domesday Book records that before the Norman Conquest the area was held by a Saxon lord named Gospatric, the Earl of Dunbar. In the late 11th century Henry I granted it to Robert de Stuteville, then seized it back after de Stuteville supported Henry's brother Robert Curthose in his attempt to claim the English throne. Henry then gave the land to Nigel d’Aubigny, 1st Baron of Mowbray.

The Hackfall estate passed through generations of the Mowbray family and was eventually purchased by Marmaduke Wyvill in 1533. A Wyvill descendant sold Hackfall to John Hardcastle in 1614 and the Hardcastles sold it to Sir John Aislabie in 1731.

Aislabie was a fascinating character, a politician whose career was ruined by his links to the South Sea Bubble scandal. With his career in tatters, Aislabie retired to his Yorkshire estates and began to indulge his passion for landscape gardening.

Over decades Aislabie created the world-famous water gardens at Studley Royal (neighbouring, and incorporating, the monastic ruins of Fountains Abbey). He seems to have purchased Hackfall to cultivate the high fields along the ridge but also to quarry stone for his work at Studley Royal. 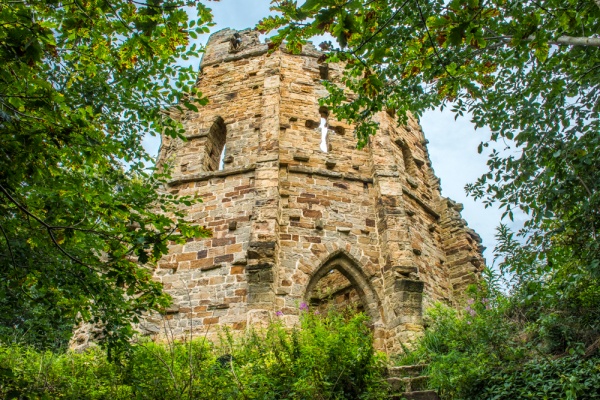 It was left to Sir John's son, William Aislabie to create a romantic woodland garden in the wooded ravine. His aim was to offer visitors a glimpse of nature at its most picturesque; a mix of dramatic, romantic, and the untamed natural world. It was very much an 18th-century vision, a variation on the landscape garden style popularise by Lancelot 'Capability' Brown.

Starting around 1749 William Aislabie transformed Hackfall Woods into an ornamental landscape in a natural style. Here there are no broad avenues or straight lines, but wandering trails and sudden viewpoints. Aislabie built around natural features like cliffs and the River Ure at the bottom of the valley. Trees were cleared, but only enough to create naturalistic viewpoints. The transformation of Hackfall Woods took Aislabie almost 17 years, finishing around 1767.

We do not know who designed the follies that are sprinkled throughout Hackfall Wood; they may have sprung from the imagination of William Aislabie himself. But, one, The Ruin, may have been designed by - or at least inspired by - Robert Adam, the fashionable Palladian architect. The Ruin strongly resembles Adam's 'Design for a Roman Ruin', and we know that Adam was working at nearby Newby Hall from 1766, at the same time that The Ruin was erected. 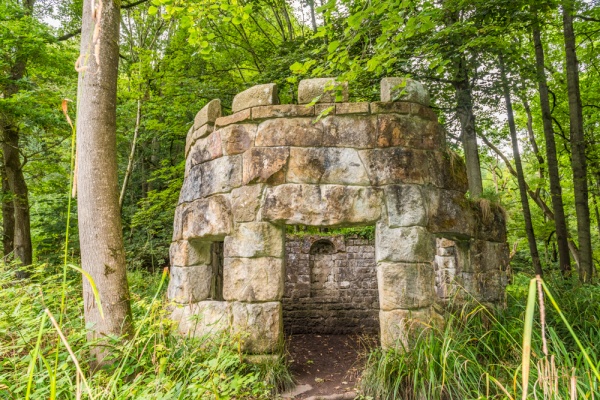 The result was incredibly popular with 18th and 19th-century visitors. In 1766, before the work was completed, artist Nicholas Dall painted two views of the woodland garden. A later artist to visit Hackfall was JMW Turner, who visited in 1816.

Empress Catherine of Russia commissioned a dinner service of Wedgwood porcelain based on scenes from Hackfall Woods. In the Victorian period, the woodland became a destination for wealthy and famous people. Less influential visitors could buy tea at Hackfall House and purchase a ticket to see the woodland.

Aislabie harnessed the power of water at Hackfall, just as his father had done at Studley Royal. Water was collected in cisterns and reservoirs so that it could be released for maximum impact to startle and delight visitors.

Unfortunately, those halcyon days did not last and from the early 20th century the woodland garden was neglected. It was sold to a timber merchant in 1932 and most of the mature trees planted by William Aislabie were felled. Logging operations damaged the woodland paths and the carefully planned drainage system. The water features were flooded as a result, and the entire woodland garden was overgrown. Villagers were given permission to collect firewood from the woods. 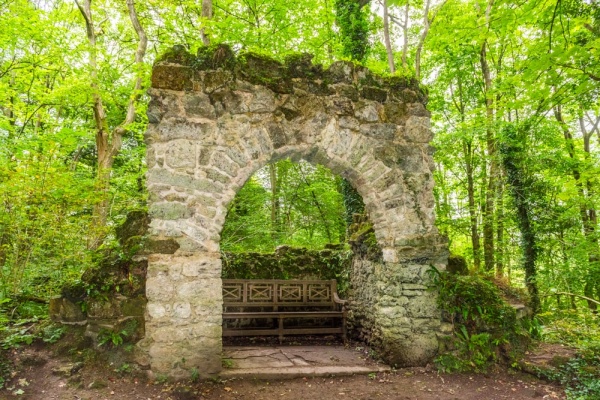 In 1989 the woodland Trust purchased Hackfall on a 999-year lease. The Trust cleared the woods, replanted trees, and restored footpaths. Many of the follies were restored, and a free car park built at the Masha, end of the woods to encourage visitors. The Landmark Trust transformed the Banqueting House into accommodation overlooking the ravine.

Built from local tufa, The Grotto provided a place for fashionable 18th-century visitors to rest in rural splendour. It offers views of a striking 40-foot waterfall.

The 'temple' is composed of huge irregular stone blocks carved so that they interlock without the need for mortar (a style of architecture dubbed 'cyclopean'). It is designed like half of an octagon, with the open side reinforced with stone and mortar. Historians suggest that the structure had a flagged stone floor and a plastered interior. A stone niche in the rear of the Temple may have housed a religious symbol.

The Rustic Temple is unusual in that it is not oriented towards any particular viewpoint and may have been simply a romantic spot to rest or take shelter from the rain. 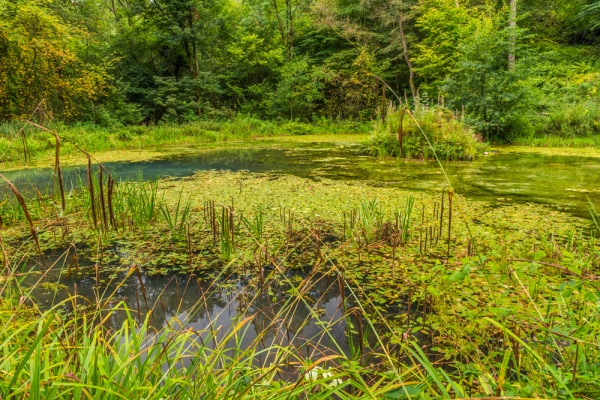 The Banqueting House (The Ruin)

The Banqueting House stands on Mowbray Point. It seems likely that visitors were taken to the building by a roundabout route that kept the superb view hidden. Arriving on the side that now faces an open field, they would see a simple rustic building in Gothic style.

The interior was pleasant, but no more than a picturesque place to eat and drink. Then the doors at the back of the Banqueting House were thrown wide, revealing a stone terrace looking over the ravine below and as far afield as York and the Hambleden Hills. The effect must have been staggering.

The woodland facade resembles a ruined Roman building, open to the elements.

Access to the Banqueting House is limited it is rented out by the Landmark Trust and may be occupied by holidaymakers.

This delightful folly may have been named for William Aislabie's gardener, William Fisher, who was closely involved in laying out the woodland. An alternative version is that the ruin was named because it was used by fishermen in the nearby River Ure.

This picturesque building is a castellated mock-Gothic tower intended to be an eye-catcher for distant views rather than as something to be seen at close range. 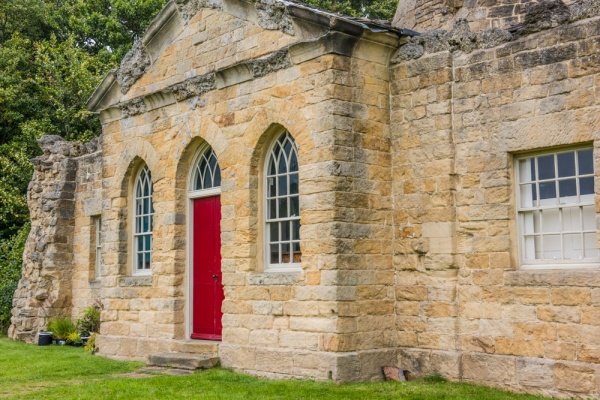 The Ruin is precisely located to provide wide-ranging views over the Vale of Mowbray and is aligned perfectly with Roseberry Topping on the edge of the North York Moors.

One of the most popular features at Hackfall is Fountain Pond, created in 1756. As its name suggests, this small pool has a fountain rising out of a small islet of tufa at its centre, but it seems the fountain was poorly designed and kept breaking down. By the early 19th century it was no longer being repaired. It is now fitted with a hand-operated pump to raise water pressure - at least that's the theory. We could not get it to work when we tried, and neither could another group of visitors.

At the heart of the valley bottom is an alum spring. Facing the spring and built into the sloping bank is a semi-circular bench where visitors could sit and enjoy the view. It seems likely that the seat was named for landscape gardener William Kent, who helped popularise Italian classical design to an 18th-century English audience. 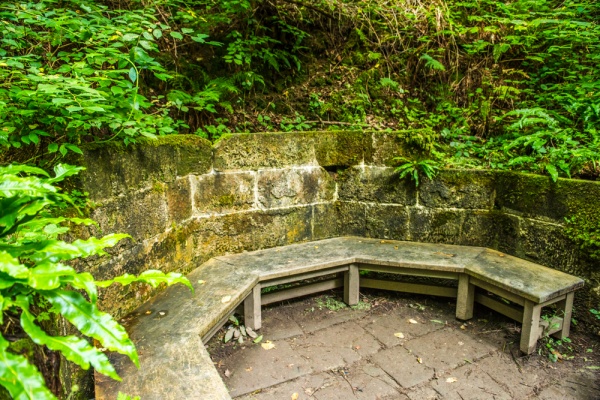 These are just a few of the many landscape features scattered throughout the woods and on the ridge at the top of the ravine. Parts of the woodland are still being restored so it seems likely that more original 18th-century features will be revealed over the coming years.

Hackfall Woods is a delight, a wonderfully different 'garden' with fantastic views and beautifully picturesque ornamental features. It is extremely easy to reach from Masham and forms part of the Nidderdale Area of Outstanding Natural Beauty. The easiest access is off the minor road between Masham and Grewelthorpe.

Be aware that the woodland paths can be muddy in wet weather, so good waterproof footwear is always a good idea. There is a useful information panel and map at the car park, but you can also download free maps from the Woodland Trust website. Leave yourself at least 90 minutes or more to enjoy a circular walk covering most of the points of interest.

More self catering near Hackfall Woods