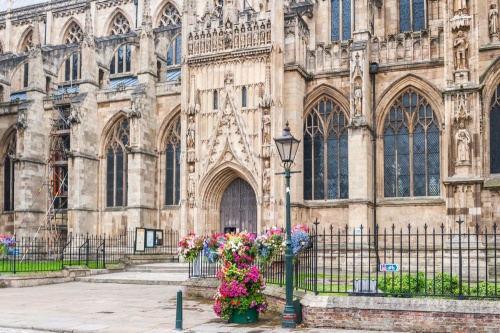 The roots of Beverley Minster go back to the 8th century, when John, Bishop of York, founded a monastery on the site where the current minster church stands. When John died in the year 721 his body was buried in the church he had founded. John was canonized in 1037 as St John of Beverley, and when miracles were reported at his tomb, Beverley became a popular destination for pilgrims.

In 1214 the tower of the Norman church collapsed. The only real survivor of that early Norman church is the font. A new church was built around St John's shrine, beginning around 1221. It took over two centuries to complete the glorious Minster church we can see today, and work was not complete until 1425.

Because the work took so long to complete Beverley Minster exhibits three distinct phases of Gothic style, from Early English to Decorated, and finally, Perpendicular Gothic. The result is an exquisite example of Gothic architecture, making Beverley Minster arguably the most lovely Gothic building in England. 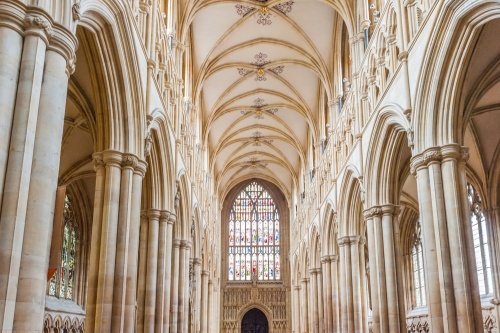 The nave vaulting and arcading

The church is 393 feet long, making it longer than many English cathedrals. There are two west towers standing high above the west front, considered one of the best examples of Perpendicular Gothic in the country. There is a long nave, twin transepts, choir, sanctuary, and finally, a retroquire.

The twin transepts are unusual, as is the fact that the main transepts are so large that they have aisles on both the east and west sides. The church terminates in a huge east window; this was built in fine Perpendicular style in 1416, replacing an Early English collection of lancets. The east window is the only surviving medieval window in the minster. 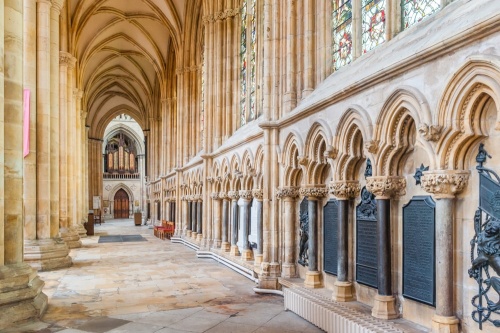 While the east end of the church is largely Early English, save for the east window, the nave is Decorated Gothic, with elaborate tracery and carved capitals on the nave columns. There are several fine monuments, including the Percy Memorial, with its excellent carved canopy.

The Percy Canopy is generally regarded as one of the best examples of Decorated carving in existence. The canopy was carved between 1340 and 1349, probably by a group of 5 local masons. It is not clear who is commemorated with the canopy, but the most widely accepted person is Eleanor, wife of Henry Percy, first Lord Alnwick. 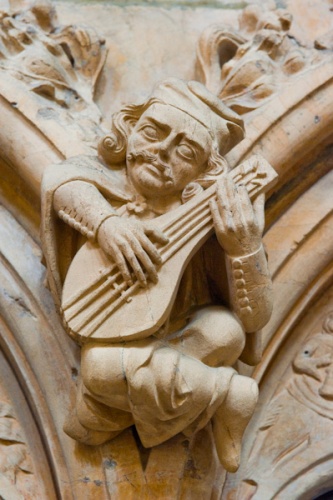 A medieval carving of a musician

The west end of the church is primarily Perpendicular Gothic. The majority of the stone used in the Minster interior is light-coloured Tadcaster limestone, with Purbeck marble used profusely in the east end.

Of note is the organ screen which separates the nave from the choir. This intricately carved screen was designed by famed Victorian architect Sir George Gilbert Scott and carved by James Elwell, a Beverley native.

The minster is famous for its carvings of medieval musical instruments. There are over 70 such carvings, illustrating instruments that are familiar to modern viewers, but also a variety of unusual medieval instruments. Among the carvings are depictions of bagpipes, flutes, pipes, organs, tambourines, shawms, cymbals, trumpets, lutes, and more.

Beverley Minster also boasts 68 medieval misericords, the largest collection of any parish church in the country. These misericords, or 'mercy seats', were provided to help provide support for choristers who had to stand throughout long church services.

The misericords at Beverley cover such diverse subjects as domestic discord, bizarre beasts, dancing fools, and animals as musicians. One famous misericord depicts a fox preaching to geese, and geese hanging the fox. (A similar theme can be found in the famous carved bench ends at Brent Knoll, Somerset). 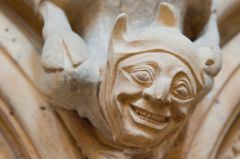 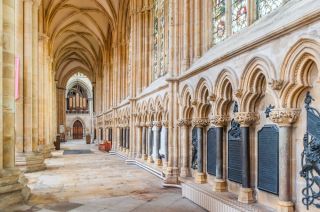 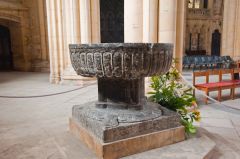 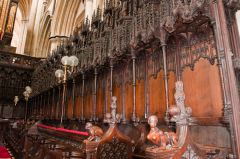 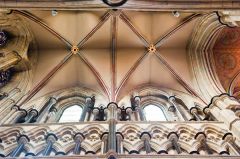 More self catering near Beverley Minster

Self Catering near Beverley