HERITAGE HIGHLIGHTS:   The only Ice Age art in Britain 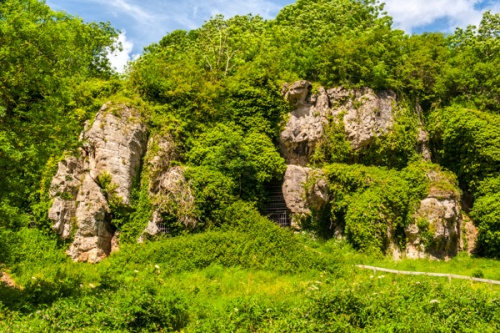 The caves at Creswell Crags were used as shelter by Neanderthal nomads following herds of migrating animals such as woolly mammoths, reindeer, and bison. The nomads left behind stone tools and animal bones that provide the single best source of information on life in Ice Age Britain, between 50,000 and 10,000 years ago. 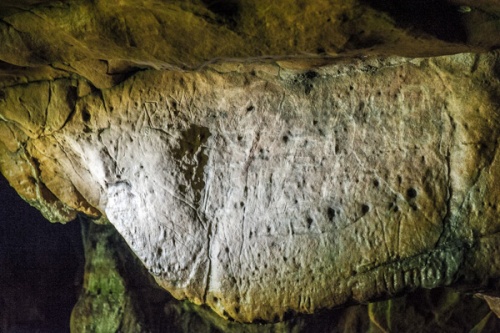 Picture of a stag - the oldest image in Britain

The third and final period of use took place from 13,000-11,000 years ago when Old Stone Age hunters left behind a finely shaped flint tool known as the 'Creswell Point'. They also deposited decorated pieces of bone incised with hatch patterns, horses heads, and human figures. Replicas of these finds are on display in the visitor centre museum.

The caves continued in use through the Roman and medieval periods.

The caves are home to the only known examples in Britain of Ice Age cave art; dated to around 13,000 years ago. The largest cave in the Gorge is known as Robin Hood's Cave, from the local legend that the famous outlaw sheltered in the cave.

The caves have been excavated twice; once in the 1870/80s and again in the 1920/30s, but visitors have been exploring the gorge since at least the 18th century. The site lay on the estate of the Duke of Portland. One of the Duke's visitors was the painter George Stubbs, who used the Crags as a background for several of his works. 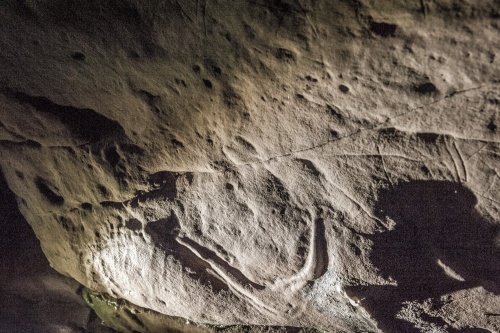 Visitors can enjoy a guided tour of the caves and see objects found by archaeologists in the visitor centre museum. There are several tour options; one tour takes in Church Hole on the northern side of the Gorge, where the guide helps interpret the carvings that line the walls and ceiling of the cave. There are around 20 images in Church Hole and another single image in Robin Hood's Cave.

The images depict wild cattle thought to be the extinct auroch, a horse, a red deer, and several downward-pointing triangles that have been interpreted as vulvae. There are also strange elongated forms that might represent stylised women or, perhaps, long-necked birds.

Another tour explores Robin Hood's Cave and lets you experience what life was like for the Ice Age nomads who used the cave, while the newest tour lets you see the most recent find at Creswell - a collection of witches marks made to ward off evil. 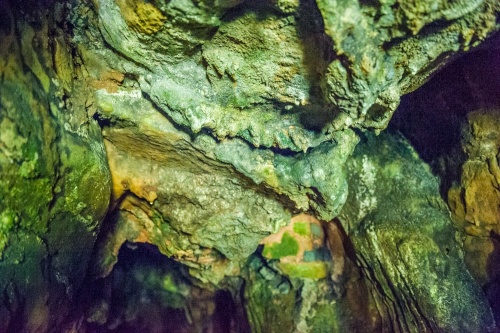 In 2019 archaeology experts examining the carvings that line the caves at Creswell made a startling discovery; marks that had previously been interpreted as 17th and 18th-century graffiti were, in fact, 'witches marks', made to ward off evil spirits emerging from the underworld.

When reanalysed, the carvings proved to be the largest single collection of 'apotropaic' marks (from the Greek word apotrepein, meaning 'to turn away'). One cave had hundreds of carvings near the entrance.

The most common carving is a double V ('VV'), thought to stand for Mary, Virgin of Virgins. Turned upside down the double V makes an 'M' for Mary. Aside from the VV mark, there are also maze symbols and boxes, symbolic of an attempt to trap evil. Witches marks are often found near entrances to buildings, such as doorways and windows, as well as chimneys, but this is by far the largest concentration in any single location. 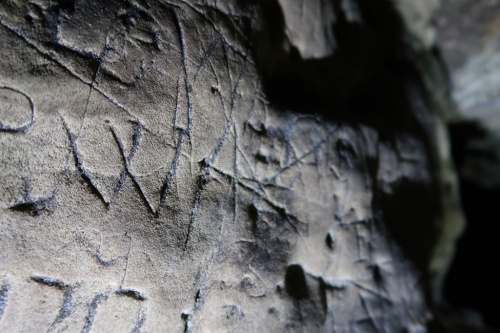 Creswell Caves is a fascinating site. The location is utterly superb, with Crags Pond running down the centre of the gorge and the high limestone cliffs rising up on either side. A trail leads around the Pond and lets you explore the site after your tour is over. There are information panels outside several of the caves explaining what was found there and what life was like for the wanderers who used the caves. Our family thoroughly enjoyed our visit. 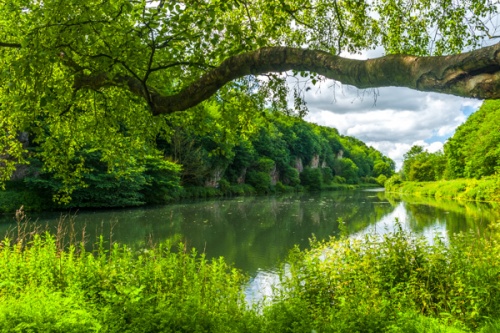 The museum is excellent; aside from exhibiting finds from the Gorge it also hosts 6-8 special exhibitions throughout the year, with major themes including archaeology, wildlife, art, history, and nature. There are over 100,000 items in the museum, including a wealth of animal bones and flint tools.

One of the star exhibits is 'Eric', a nearly complete skeleton of a baby hyena. One of the most peculiar items is a stone tablet etched with a Nine Men's Morris game board. This was discovered next to medieval coins and bottles, suggesting that the area outside Church Hole was used as a gambling den during the medieval period. The game board could be linked to the nearby monastery of Welbeck Abbey.

More self catering near Creswell Crags