Barnby in the Willows, Nottinghamshire 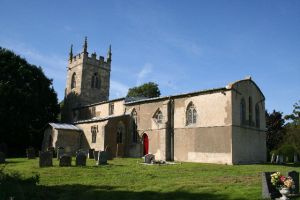 A small settlement on the banks of the River Witham, on the border of Nottinghamshire with Lincolnshire. Barnby may have developed around the site of a Roman ford. The village was mentioned in the Domesday Book of 1086 where it was recorded as Barnebi.

Bishop Odo of Bayeux owned half the manor, while the Bishop of Lincoln held the other half. There was a mill on the Witham, probably just south-west of the church.

During the 13th century, the Knights Templar held Flawford Farm, though it appears they refused to pay tithes to the local church.

The oldest building is All Saints Church, built in the 13th century with the addition of a 15th century Perpendicular Gothic tower. All Saints features some lovely 15th-century poppy head carvings on the bench ends and a 17th-century altar rail.

The sanctuary walls are lined with very nicely carved 17th-century panelling. The church is full of memorials to the Sharpe family, who lived at Barnby Hall from the early 17th century. Perhaps the finest memorial is to Mary Sharpe, who died at the age of 24 in 1742.

At Dovecot Farm on Front Street is an ancient dovecot which has been variously dated to the late medieval period or the 17th century. The circular structure was designed with 728 nesting holes, though this was later altered to the current 670 boxes.

The local pub is the Willow Tree, which began as a farmhouse and attached barn in 1748. It has served as a pub since the 1870s and serves traditional cask ales, brewed on-site. 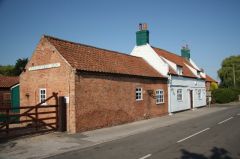 Nearest Accommodation to Barnby in the Willows:

More self catering near Barnby in the Willows >>

More Hotels near Barnby in the Willows >>

More bed and breakfasts near Barnby in the Willows >>