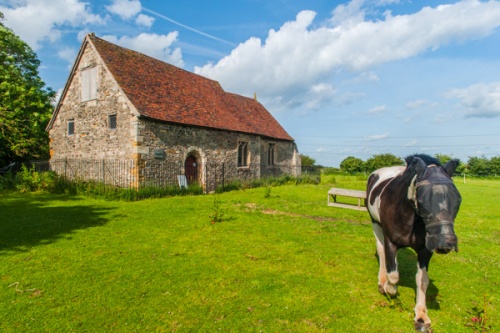 The ancient chapel at Elston stands in a farm field apart from the village. This small building is composed of only a nave and small chancel, with no tower and no porch. Given the absence of a tower you might expect to find a bell turret, but there is none.

Entrance is through a door in the south-west of the nave. The door is the most interesting feature of the church; it dates to the Norman period and is decorated with traditional Norman motifs, including zig-zag carving patterns. A much newer addition to the door is a bit of graffiti on the jamb, dating to 1717.

Despite the early origins of the church, the interior is primarily a product of the 14th and 15th centuries. Most of the windows are 14th century. The interior is filled with a series of box pews, including a squire's pew for the Fillingham family of Syerston. At the west end is a simple, rustic Georgian gallery.

Restoration work has uncovered a section of wall paintings, including Biblical texts that feature so heavily in Georgian decoration. One intriguing section of paintings shows one scene overlaying an earlier painting. The earlier shows a royal coat of arms. The overlying painting shows a very large lion.

The exact history of the chapel is unclear, but it was created a chapel of ease for St Oswald's church at East Stoke in 1577. It is entirely possible that it was originally built as a chapel for the Hospital of St Leonard, an early medieval establishment whose exact whereabouts is uncertain but must have been located somewhere close by.

Elston Chapel is no longer used for regular worship and is in the care of the Churches Conservation Trust. 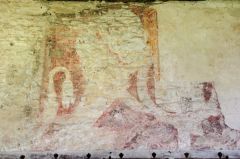 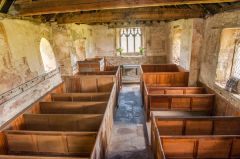 More self catering near Elston Chapel >>