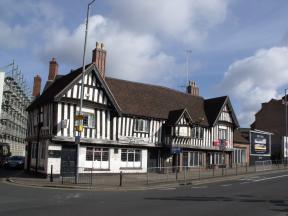 The Old Crown is a family owned and run pub and guesthouse. Originally built in 1368 The Old Crown is Birmingham's oldest Inn. Only half a mile from the city centre and based in the heart of Digbeth there are a good selection of rooms available : An apartment family rooms doubles twins and singles.

The Old Crown is a striking building rich in history and character and is one of a few remaining examples of Birmingham's medieval past. It has seen off Civil War soldiers Victorian town planners and German bombs! The building is a Grade II listed building and was built circa 1368. It dates from the Tudor period and was one of Birmingham's very first school buildings.

In 1575 The Old Crown received a very famous visitor...Queen Elizabeth I rested here on her way home after attending a party at Kenilworth Castle. During the English Civil War the Old Crown was the last standing building to hold out against the infamous Prince Rupert and his army...the event subsequently labelled the "Birmingham Butcheries". Over the years town planners wanted to demolish the building but it was saved many times by Joshua Toulmin Smith.

It is believed that every room has a tale to tell and it is said that the Old Crown is haunted by not one but two ghosts! Ask our staff for some of the building's spooky tales. The Old Crown is located only half a mile from the city centre making it perfect for anyone travelling for work wanting to visit the Bullring (our proud shopping complex) see our sights or just for a break. There are good transport links with buses and trains running in the local area.

We are located in the heart of Digbeth which is a lively area filled with culture and a hospitable community. We have a café and kitchen on-site providing freshly made food and pub classics. Why not ask us for a menu? Breakfast is available for a small surcharge which is freshly prepared each morning by our chef.

Dining Facilities
The Old Crown serves a range of breakfasts for our residents between 8am and 11am. Outside of those hours cafe is also open Monday - Friday daytimes until 3pm where you can grab some lunch which is freshly prepared by our caf? staff. Our bar menu is available from midday offering both hot and cold meals burgers sandwiches pub classics and smaller snacks for those with a lighter appetite.

Get an Ordnance Survey map covering the Birmingham area.