HERITAGE HIGHLIGHTS:   As many as 10 stone rows cross the moor 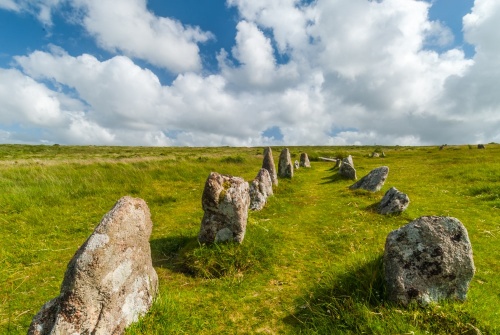 On the gentle slope of Shovel Down, near Chagford, is an impressive collection of Bronze Age stone rows, a four-fold stone circle, a cairn circle, an ancient settlement, a solitary standing stone known as the Long Stone and another known as the Three Boys Stone. This remarkable ceremonial landscape is just a short walk over the moor from Scorhill Stone Circle and the Tolmen Stone.

There are anywhere from five to ten stone rows, depending on how you count them, arranged on a north/south axis. The National Monument Record lists four double stone rows and one long single row broken up into four sections, while other archaeologists consider the single row as four separate rows. However you count the rows, Shovel Down boasts a wonderful array of ancient monuments. 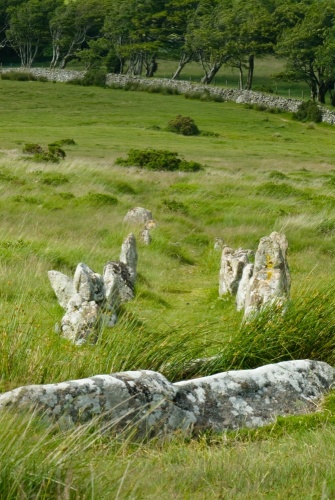 The monolithic standing stone known as the Long Stone acts as a punctuation mark for the southern end of the stone rows. The Long Stone stands 3.2m high (10.5 feet) and is a very impressive feature on the relatively flat landscape. It now serves as a boundary marker for the junction of three parishes.

An old tradition states that during the annual 'beating the bounds' ceremony on Gidleigh Common, the first man to reach Long Stone was given a prize. 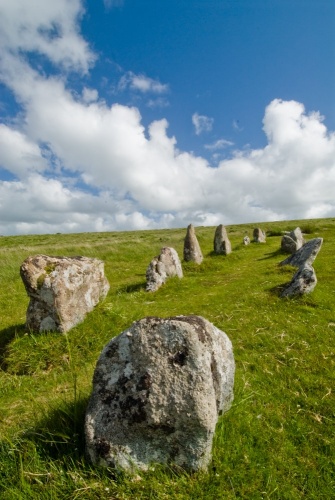 Further south, standing on its own, is a single half-fallen stone known as the Three Boys Stone. The peculiar name comes from the fact that there were once three standing stones grouped together, but of these only one survives. The other two stones are thought to have been taken away to be used as gateposts.

At the southern end of the first section of double stone rows is the Fourfold Circle, consisting of four concentric stone circles. The inner circle is just 2.4m across (8 feet) while the outer circles gradually increase from 4.7m (15 feet) to 6.4m (21 feet) to 9m (30 feet) for the outer circle. Beside the circle is a cairn with a central cist which appears to have been robbed. 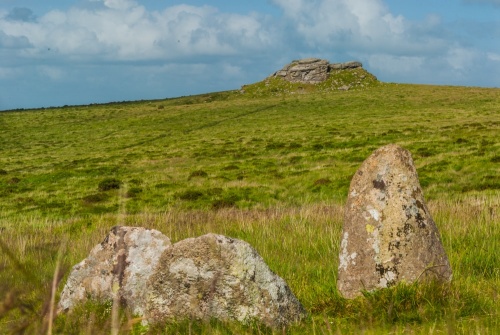 Thornworthy Tor from the stone circle

The Shovel Down site is relatively easy to get to, but chances are you won't see a living soul about; it's that sort of place. From Chagford drive west on Manor Road to Teigncombe. Pass through Teigncombe and carry on until the road ends at Batworthy Corner where there is room for 4-5 cars by the bridge at Batworthy Farm.

Follow the field boundary onto the moor and you immediately find yourself at the northern end of the stone rows. A mile to the north is Scorhill Stone Circle and the peculiar holed stone known as the Tolmen Stone.

More self catering near Shovel Down Stone Rows

More bed and breakfasts near Shovel Down Stone Rows