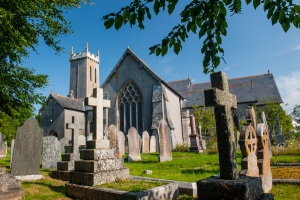 There has been a church here, looking over the River Tavy, since the Saxon period. Shortly after the Norman Conquest a new church was built, but this, too, was replaced in the mid 13th century when Sir William de Ferrers founded an Arch Presbytery, with four priests and a deacon under an Arch Priest. The first rector was William's younger brother, Reginald de Ferrers, who was installed in 1258.

The clergymen lived across the road from the church, probably on the site now occupied by the Lanterna Hotel, with their quarters joined to the church by an underground passage. The clergy were supported by choirboys, and their job was to say daily prayers for the souls of Sir William and his wife for eternity, so that at any hour of the day or night Mass was being said at one of the 5 altars within the church. The presbytery was dissolved by Henry VIII in 1533, but even today the rector of Bere Ferrers bears the title of Arch Priest. 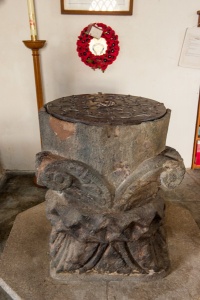 About 1332, Sir William's grandson, another William, extended the church, in part with money from a successful silver mine just a mile up the Tavy. The mine did so well that Edward I took it for the crown, instructing the Ferrers to extract the silver and send it to London.

The 14th-century building was extended in the 15th century when the south transept was enlarged to create an aisle. Despite this, and later 17th century remodelling of the interior, much of what we can see today is unaltered 14th century work.

One important survival from that period is the 14th century stained glass in the east window; this is the oldest glass of any parish church in Devon (there is slightly older glass in Exeter Cathedral).

In the left panel is a portrait of Sir William de Ferrers, holding a picture of a church. Just to drive home the point, a Latin inscription above translates as 'Sir Will Ferrers made me'. On the right is a similar likeness of his wife Matilda, daughter if Sir Roger Carminow.

In the centre panel is a depiction of Christ in Majesty. Below is a likeness of a pilgrim, possibly Sir William's great uncle Roger, who died while on a pilgrimage to Jerusalem about 1200AD. Or it may represent the second Sir William, who died in 1337. 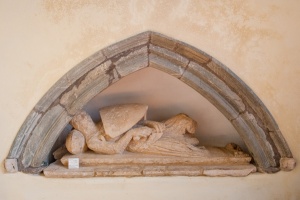 Historic highlights of the interior include a 12th-century font of Hurdwick stone, lined with lead. The stone comes from Tavistock, and the bowl is large enough to allow for complete immersion.

You can still make out adze marks on the bowl, which is supported on remarkable shell-like projections, curving out. These 'shells' if that is what they are, rest on carved leaves. The effect is unlike any other font I've encountered in England. Indeed, at first glance, I thought the font was an up-ended tree trunk!

Near the altar is a small brass plaque as a reminder of a tragic accident; in 1821 artist Charles Stothard was up a ladder, making sketches of the stained glass, when a rung broke, he fell and was fatally injured, striking his head on the edge of a monumental effigy beside the altar.

Stothard is buried in the churchyard, below the east window, and a is memorial placed on the spot where he received his fatal injuries. In a poignant side note, Stothard apparently had a note in his pocket from his wife, admonishing him 'Take care not to fall from high places'. 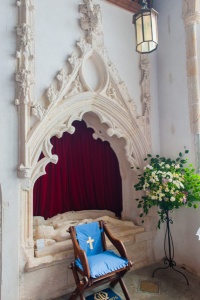 On the north wall of the chancel is a moving memorial to 10 New Zealand soldiers who were killed at Bere Ferrers rail station in 1917. The men got off a troop transport train, believing they were alighting at Exeter station to receive food rations.

At the same instant, an express train passed in the other direction, and the men were tragically killed instantly. The inquest returned a verdict of accidental death, and the local people erected a memorial plaque inside the church.

A New Zealand flag hangs from the wall beside the memorial, a gift from High Commissioner Bryce Harland in 1989. There is also a stone slab commemorating the soldiers on the plinth of the village war memorial, a few steps from the churchyard.

Another memorial with military connections is that of Major Edward Bayley, of the Connaught Rangers, who died in 1855, during the Crimean War, while 'leading a party to storm and capture the quarry works before Sebastopol'.

There are several notable medieval tombs inside the church. In the sanctuary is a canopied tomb chest to the first Sir William de Ferrers (d. 1280) and his wife Isolda (died c. 1300), builders (or, if you prefer, re-builders) of the church. Their tomb chest lies within an ornate canopy that may once have served as an Easter Sepulchre. 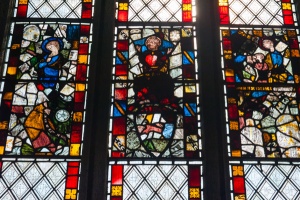 In the north transept is an effigy to Sir Reginald de Ferrers (d. 1315), the first Sir William's son. This is one of the finest early 14th century effigies in Devon, showing the knight turned on his side, towards the viewer.

Nearby is a 16th century fireplace, inserted to keep the Lord of the Manor warm during services. Also in the transept is a beautifully decorated table tomb thought to be that of the 2nd Baron Willougby de Broke, who died in 1522 at Bere Barton, the victim 'of a pestilence'.

Between the chancel and nave are remnants of a medieval screen, with defaced likenesses of saints. As you pass through the south porch look up, and see the roof bosses, carved with the arms of Cheyney, Ferrers, Latimer, and Willoughby de Broke. over the porch is a small chamber eached by an external stair. One possibility is that the chamber accommodated pilgrims setting sail for Compostella via Plymouth.

Bere Ferrers takes some getting to; it is located at the end of a peninsula, surrounded by the estuaries of the Tavy and Tamar. You have to make a concerted effort to get here, but it is worth the effort. The location is superb, with wonderful views across the river, and the church is full-to-bursting with history. 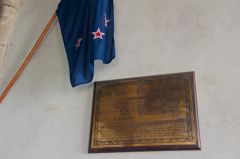 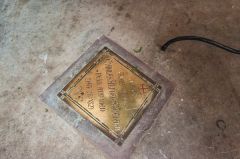 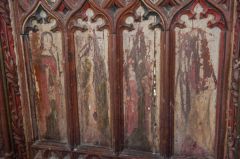 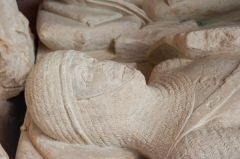 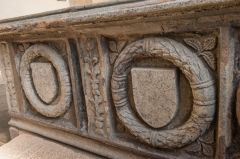 More self catering near Bere Ferrers