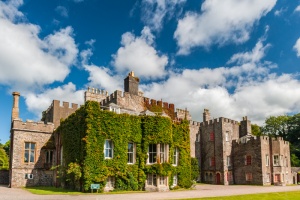 Hartland Abbey is a comfortable Georgian manor house, built upon the foundations of a 12th-century monastery. It has been in the same family since 1547.

Hartland Abbey is tucked neatly in a quiet, secluded valley about a mile from the North Devon coast, and equally far from the village of Hartland. The Abbey was founded in 1137 by Lord Dynham, lord of the manor at Hartland, as an Augustinian monastery, serving the church of St Nectan at nearby Stoke, which is the parish church for Hartland.

The abbey remained in the hands of the Augustinians until 1547 when it was the last monastery in the country to be dissolved by Henry VIII. The king gave Hartland to his Sergeant of the Wine Cellar at Hampton Court Palace, William Abbot.

The abbey passed through several branches of Abbot's descendants until it came into the hands of George Buckley in 1813. Buckley's grandson changed the family name to Stucley, and Hartland is still the home of the Stucleys today. 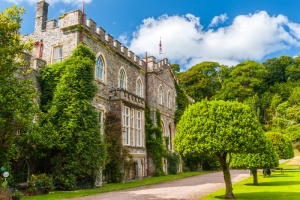 The original monastic building is incorporated into the present house on the west side, and much of the remainder is built upon the Augustinian foundations. The first major renovations to the monastic buildings were the work of Paul Orchard, who became lord of the manor in 1704.

Orchard's son, also named Paul, pulled down many of the original features of the monastic buildings, including the abbey chapel and Great Hall, to make way for grand Georgian building that you can see today.

Though the structure of the house is much as it was in the mid 18th century, much of the interior furnishings and decorative elements are Victorian. Worthy of note is the spiral table in the Dining Room. This peculiar contraption was purchased for only £10 in 1934 by Sheila, Lady Stucley. It can be enlarged by twisting the table around, to sit 10, 16, or 22 people with the insertion of triangular leaves. It is quite an extraordinary piece of clever furniture construction. 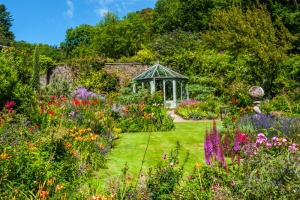 The Alhambra Corridor was designed in 1862 by Victorian master architect Sir George Gilbert Scott in imitation of the Alhambra Palace in Spain. The owner of the house at that time, Sir George Stucley, was so struck by the Moorish design of the palace that he instructed Scott to create vaulting and stencilling that would recreate the look of Alhambra in North Devon!

There is an extensive Victorian and Edwardian Photographic exhibition in the basement, as well as a fascinating Document Collection including 12th-century deeds and other court documents. One of these is a written vow by a farmer of Woolsery that he will no longer kidnap and physically abuse the King's Messengers!

Among the later documents is a 1604 grant to Sir Lewis Stucley. Sir Lewis is a bit of a tragic figure; he was publicly reviled for his alleged part in the arrest and execution of his cousin, Sir Walter Raleigh, and though he protested his innocence in the affair, he was eventually driven mad and died a lunatic on Lundy Island.

The first three reception rooms open to the public are worth noting. These are the Drawing Room, Billiard Room, and Dining Room. They were built in 1779 by the second Paul Orchard and remodelled by Sir George Stucley beginning in 1845. Sir George took as his inspiration the neo-Gothic Houses of Parliament in London.

The rooms feature linenfold panelling below and exquisite murals above. The murals are modelled after a series in the Robing Room of the House of Lords, where the painting depicts scenes from Arthurian legend.

In this case, the murals show scenes from history involving Stucley ancestors. For many years the paintings were covered over with wallpaper, and it was only when the wallpaper began to show signs of age and was removed that the wonderful artwork beneath was revealed. 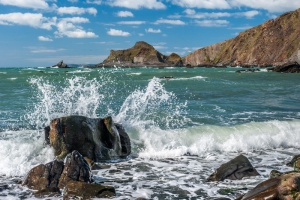 One other highlight deserves a mention. Below stairs is a fascinating exhibit on the life and colourful career of perhaps the most influential member of the Stucley family, antiquarian William Stucley, famed for his studies of Stonehenge and other prehistoric sites.

William Stucley is unfairly remembered for his conviction that ancient stone circles were built by the Druids, which he decided must have evolved from a much older Abrahamic tradition (in essence making Druidism a direct ancestor of Christianity).

Though Stucleys Druidic theories were later a source of amusement among modern archaeologists, he was also the first to rigorously measure ancient sites like Stonehenge and put forward the now widely accepted theory that the stones were aligned in accordance with celestial events such as midsummer sunrise. Modern archaeology owes a debt of gratitude to William Stucley, and his life is explored in fascinating detail in the exhibit.

There are extensive grounds, with a Shrubbery, Walled Garden, and a Ladies Walk. The walled garden is located quite some distance from the house, outside the main entrance to the Abbey grounds. Your reward for walking along a lovely wooded path to the garden is a beautiful display of colourful flowers set around a sundial with a twisted stem, overlooked by a shaded summerhouse.

There is also a quite lovely shaded walk to a private beach (distance about 1 mile) that leads through open woodland with bluebell woods, before crossing the South West Coast Path and emerging at the coast. On the way to the beach, side trails lead to a summerhouse set in a woodland glade, and to a gazebo high on the hillside overlooking the shore.

If you follow the coast path south-west from the beach you will come to a curious folly in the shape of a ruined tower, looking like the ruins of a medieval castle. The tower is arranged to provide views to and from the Abbey and the striking tower of St Nectan's church at Stoke, both easily visible in the distance. 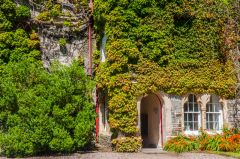 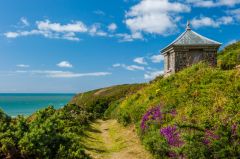 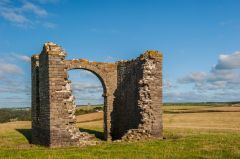 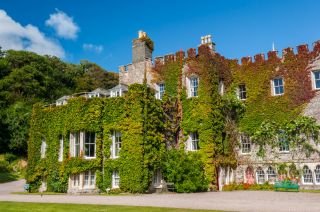 More self catering near Hartland Abbey