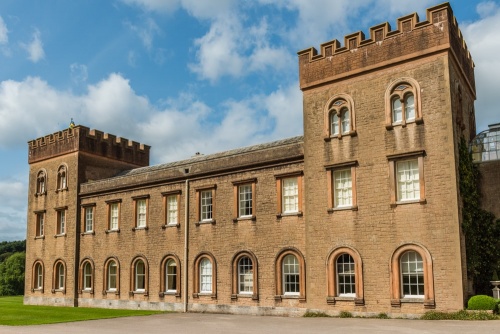 Ugbrooke Park is the family home of the Lords Clifford of Chudleigh, who have owned the estate here for over 400 years. This elegant country house stands in a quiet Devon valley, in beautiful parkland landscaped by Capability Brown.

The history of Ugbrooke goes back to at least the 11th century when the manor was mentioned in the Domesday Book. During the Middle Ages, the house was owned by the Church and occupied by a series of Precentors to the Bishop of Exeter.

After the Reformation, the house was leased by the Duke of Somerset, Lord Protector, who quickly sold it to Sir Piers Courtenay of Powderham Castle. When Sir Piers' widow died in 1604 the estate passed to her grandson Thomas Clifford and Ugbrooke is still in Clifford hands today.

Thomas Clifford's grandson, also named Thomas, supported the royalist cause in the Civil War. After the Restoration of the Monarchy in 1660, Sir Thomas was a leading member of Charles II's government. In 1669 he was one of the five ministers in the 'Cabal' administration (the 'C' in Cabal stood for Clifford). He was named Lord Clifford of Chudleigh in 1672, a title still carried by his descendants. 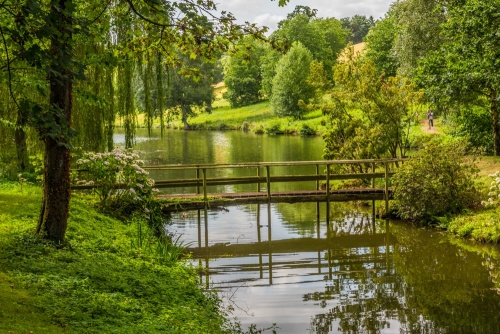 The following year, however, Clifford converted to Catholicism and resigned political office. He left 2,000 pounds in his will so that his son, Hugh, could rebuild the family home. Hugh Clifford laid out the surrounding parkland with formal avenues. One visitor to Ugbrooke during these years was the writer John Dryden who is thought to have composed The Hind and the Panther in the park during a visit in 1687.

In the middle of the 18th century, the 4th Lord Clifford decided to rebuild the existing manor in the new neo-classical style that was making such an impact in English fashion at that time. He called in two masters of the age, Robert Adam and Lancelot 'Capability' Brown to transform the house and gardens respectively.

Robert Adam created a house in restrained classical style, which retained something of a medieval fortress in its exterior aspect, with a rectangular plan and four crenellated towers, one at each corner.

The interiors shine in true Adam style, with classical themes, plasterwork, and painted decorative elements. There are collections of fine furnishings on show, including needlework, antique furniture, old paintings, and a collection of military uniforms worn by members of the family over the centuries.

Perhaps the best Adam feature is St Cyprian's Chapel, with a superb marble altar and apse and adjoining Baptistry and Lady Chapel. The Chapel is thought to be the oldest Catholic parish church in the West Country. It was begun as an Anglican chapel but was rededicated when the 1st Lord Clifford converted to Catholicism in 1672. 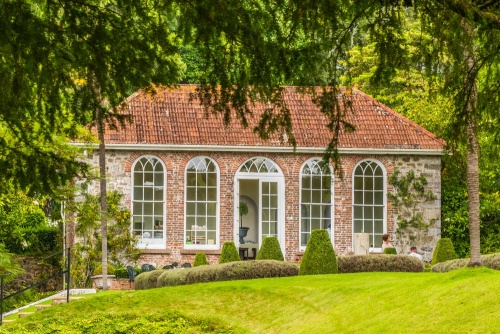 The gardens are typical Capability Brown, with sinuous paths and sweeping vistas, including glimpses of Dartmoor in the distance, augmented by lakeside trails and quiet pockets of trees and shrubs. The Ug Brook flows gently through the estate, running through a series of lakes and over a small waterfall. You can see Brown's draft drawings for the garden design hanging inside Ugbrooke house.

The park has several notable tree varieties, including redwoods, Red Oak, Luccombe Oak, and Sessile Oak. Among the points of interest in the garden is the elegant Orangery, which now serves refreshments to visitors.

Later Victorian additions to the garden include a formal lavender parterre, a fernery, and a delightful Spanish garden planted with grape vines and hostas. On a terrace behind the house is a formal garden with a box maze looking out over Capability Brown's lakes and the valley below. 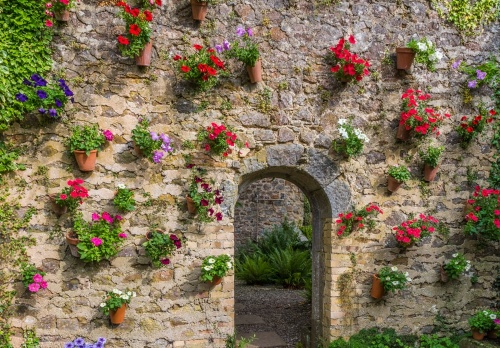 The house is very well-signposted off the A380 between Exeter and Newton Abbot and from Chudleigh town centre. Visiting the mansion at Ugbrooke Park is by guided tour only, and a timed ticketing system is in operation.

We came on a sunny day in late summer and were part of a tour group of around 25 people. Our tour guide was extremely knowledgeable and very entertaining. The tour took about 90 minutes but never felt too long. Unlike some stately home tours, we were invited to sit down on chairs in all the staterooms; a welcome relief if you've been walking all day!

Ugbrooke Park is a delightful country house, but what we enjoyed most was the peaceful countryside setting. Though we were only a few minutes from major roads it felt like we were deep in idyllic countryside, in a world where time has stood still.

Unfortunately, we were not allowed to take photos inside the house, which is a shame as we'd love to be able to share the stunning interiors and the chapel. 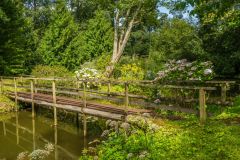 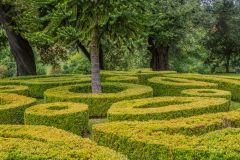 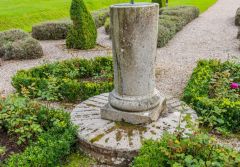 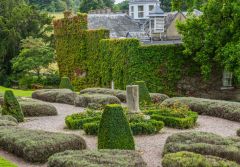 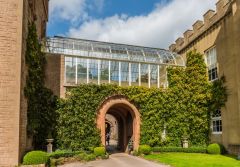 More self catering near Ugbrooke Park >> 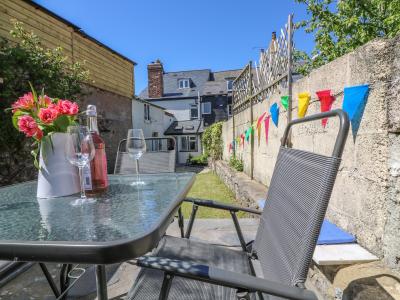 This terraced cottage is located in the village of Chudleigh, near Exeter and can sleep seven people in four bedrooms.
Sleeps 8

This smart and spacious 5* cottage close to Chudleigh, has superb long views and can sleep six people in two bedrooms.
Sleeps 6