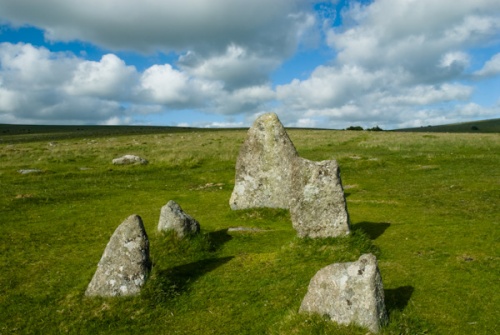 Merrivale Prehistoric Site is not one monument, but a multitude of monuments sharing the same wonderfully scenic location in western Dartmoor. Here you will find the remains of a Bronze Age settlement, two stone rows (including one double row), solitary standing stones, burial cairns, and a stone circle. This is probably the most visited ancient site on Dartmoor, due to its proximity to a major road.

Merrivale was in use for over 1500 years, from the Neolithic to the Middle Bronze Age, with the first monuments being built around 2500 BC. The site fell out of use around 1000 BC.

The settlement is composed of 36 hut circles spread over four separate enclosures to the north of the road. sixteen of the hut circles have clearly visible entrances, and one boasts a porch. When the huts were excavated in 1895 a layer of charcoal was found in each one.

The stone rows stretch across the moorland on an east-west axis and maintain a distance of about 1 metre (3 feet) between the rows. The stones are higher to the east and taper gradually to the west. A burial cairn with an off-centre cist is set at the midpoint of the southern stone row. This is thought to be the burial place of a high-status person. 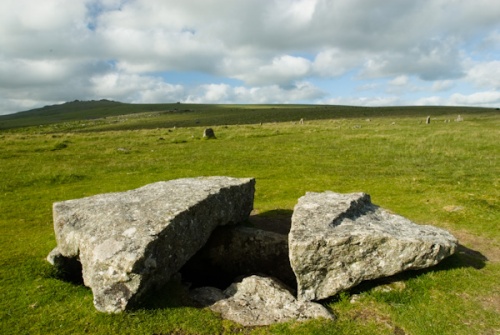 The cist with its broken capstone

Each stone row boasts between 150-200 stones, giving you some idea of the large scale of the ceremonial landscape here.

To the north is a double row stretching 182m (596 feet) and made up of roughly 160 stones. Some of the stones are quite small and the rows can be hard to follow in places. The southern row is longer, stretching 263m (865 feet) and boasting over 200 standing stones. There are large 'terminal stones' at each end, like punctuation marks in a sentence.

Curiously, there are two terminal stones at the western end of the southern row, flanking the kine of the row, rather than a single stone on the actual line of the row. Why two stones? and why not have them on the row itself? Clearly, there are aspects of the ceremonial landscape at Merrivale that we can only guess at. 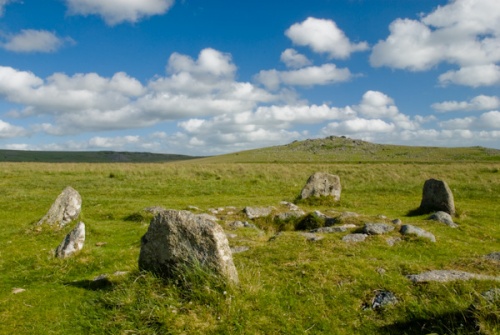 A burial cairn and cist chamber

South of the southern stone row is a cist; a stone-lined burial chamber. It is topped with a huge capstone, now damaged. You can see into the rectangular cist, which is roughly 1m x 2m and almost 1m deep. To the west of the cist is a ring cairn, and from this cairn, a single row of stones runs at an angle to the double stone row for a distance of 40m (132 feet).

West of the stone rows is a grouping of 11 small standing stones with a solitary standing stone nearby. This solitary stone is 3m (10 feet) high, making it the largest and most striking feature in the landscape.

To the west is a bank made of rubble known as the Great Western Reave. It is thought to have acted as a field boundary. This last feature is not marked on Ordnance Survey maps, but all the other prehistoric features at Merrivale are.

The setting is superb, and Merrivale represents a quite striking group of exceptional prehistoric monuments. 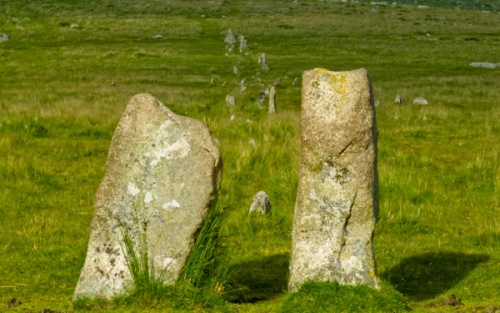 When plague broke out in Tavistock in 1625 people afflicted with the disease were banished from the town. Moorland farmers left food and drink for the plague-stricken outcasts at the stone rows. The rows gained the local name 'The Plague Market' (sometimes mangled as Potato Market).

Easy. That's the one word that describes getting to Merrivale. Unlike many of the prehistoric sites on Dartmoor, Merrivale is located immediately beside a major route over the moor. There is a parking area in a layby on the B3357 just east of the hamlet of Merrivale.

Merrivale is an open site, free to visit at any time.