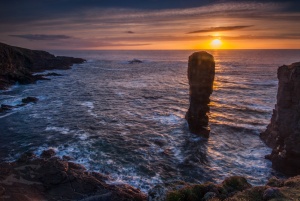 Orkney is separated from the Scottish mainland by the Pentland Firth, which is only 11km (7 miles) wide at its narrowest point.

There are roughly 70 islands in Orkney, of which 20 are inhabited. The largest island is Mainland, where the administrative capital and major city of Kirkwall is located. Those islands north of Mainland are called the North Isles and those to the south are called the South Isles. Generally, islands with 'Holm' in the name are uninhabited. Islands with 'Papay' indicate that the island was associated with early Celtic Christian missionaries.

This is the largest grouping and contains several of the smaller, uninhabited islands.

The observant reader will notice that a number of island names end with 'a' or 'ay'. These derive from the Norse 'ey', meaning island.

It is fair to say that some of the smaller islands present an often bleak and uninviting aspect. The larger islands, however, contain some spectacular coastal scenery and provide habitat for a wonderful variety of seabirds. The islands are not hilly; indeed the highest point in Orkney (Ward Hill on Hoy) is only 481 metres high, but the coastline is generally ragged, with deep inlets, or 'geos' providing cliff habitat for seabirds. The tides can be very strong, and in places, this has created 'blowholes', where the water is pushed up through a collapsed cave or natural arch.

The islands are generally treeless. This is partly the result of deliberate deforestation prior to the Neolithic period, and partly due to wind. Despite the far northern location, the climate is temperate. The major industry by far is farming, though fishing also supports quite a few Orcadians.

The geological foundation of Orkney is Old Red Sandstone, with exposed areas of underlying gneiss and granite in places.

In a word - surprising! You would naturally expect that a location so far north would be quite cold, but such is not the case. The average winter temperature in 4C, rising to an average of 12C in summer (though if the wind comes up - as it is prone to do - it will feel colder!).

Winter covers January through March, and it is June before you can really enjoy the summer weather. During these months the days can be depressingly short, with little over six hours of sunlight. But if that sounds gloomy, think of the summer, when the sun officially disappears from the sky for only a few hours, and even then it never truly gets dark. If you have a mind to you could read your travel guide at midnight, using only natural light.

The best of the weather is often September, though October and November can often enjoy a pleasant warm spell. Summer often brings fog, and there are occasional strong gales throughout the year.

Rainfall averages from 850mm to 940mm annually. For comparison, this is less than you would expect in coastal Cornwall and Devon, far to the south.