Our favourite 5 places to visit on Orkney 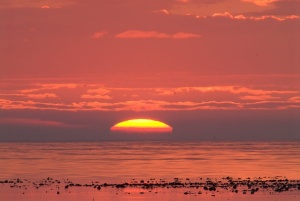 There are an astonishing number of wonderful places to visit on Orkney. Here are some that the Britain Express family really enjoyed. See our gazetteer of Orkney attractions for some further ideas of places to visit.

There is so much at Birsay that it is hard to know where to start. The village is located at the northwestern tip of Mainland, accessible by the A967 and A966. The most obvious building as you approach Birsay is the Earls Palace, built by Earl Robert Stewart in the 1570s. Across from the Earl's Palace is the simple church of St Magnus, which dates back to the 11th century. A very short drive along the shore brings you to the very tip of Birsay, where a causeway leads to the Brough of Birsay.

The Brough is cut off from the mainland at high tide, so be sure to ask at the village store for tide times or check with the TICs in Stromness or Kirkwall. When the tide is out you can walk across the causeway to explore the old Norse and Pictish settlements, and 12th-century Christian cathedral on the cliffs opposite, or climb to the top of the Brough for superb views.

Back on the mainland, a signposted path from the parking area at the Brough of Birsay leads towards Skiba Geo. The cliffs are low for the first part of the walk, and the way is easy. Keep a close eye out for seals on the rocks. At Skiba, there is a restored fisherman's hut built into the slope of the cliffs, and grooves in the ground show where fishermen stored their boats in years gone by.

Carry on around the geo to the far point, where the hip bone of a whale has been set on a post above the shore. The path continues along the coast to Longaglebe Geo, where seabirds nest in the cliffs. You can make a circular walk by turning onto the farm track and making for Birsay, clearly visible across farmer's fields. 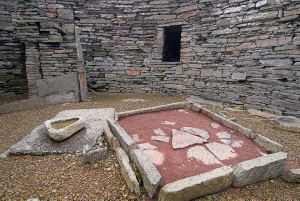 Most visitors to Orkney go no further than Mainland, which is understandable, as there is so much to see and experience on the main island. But there is much waiting to be experienced on the other, less populated islands. Each offers its own menu of things to enjoy. While we have not [yet] visited all the islands of Orkney, we can heartily recommend Rousay. The quickest way to reach Rousay is by ferry from Tingwall.

There is one main road around Rousay, which makes for an easy circular drive of about an hour. But you'll want to stop the car frequently, as there is a lot to see! The most famous attraction on Rousay is Midhowe, which is not one attraction but two; an Iron Age broch of quite striking size stands a few yards away from a long chambered cairn. The cairn, which is housed under a protective modern building, is quite astonishingly long, making it easy to see why it was handed the moniker 'Ship of Death'.

From Midhowe a waymarked path leads along the shore past a variety of historic remains. In the space of a mile you can walk past cairns, an abandoned church, Viking remains, and ruined farm buildings dating back several centuries. Carry on from Midhowe to yet more chambered cairns, and take the time to walk to the lonely standing stone at Yetnasteen.

According to legend, the stone walks down to the nearby loch on New Years Day. (It didn't move while we were there, but, then, we visited in the Autumn.). If you enjoy scenic drives and ancient sites, Rousay will provide a very satisfying day out.

Located on the eastern coast of Mainland, just a few miles north of Stromness, Yesnaby was the site of a military battery in WWII. The military buildings are mostly gone now, and walkers park their cars where army jeeps once stood. The appeal of Yesnaby is the stunning marine landscape. The cliffs are spectacular here, and the path winds south along the cliffs, past geos and sea stacks, natural arches and blowholes. Come at sunset, on a peaceful summer night, and see if you don't agree that this is a special place. 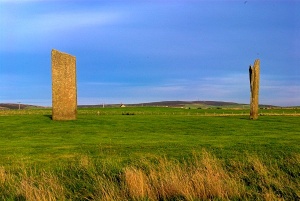 The Stones of Stenness

The nearby Ring of Brogar (Brodgar) gets more attention, perhaps because of its size, and the tour bus stop at Maes Howe Chambered Cairn a few fields away, but the Stones of Stenness are well worth a visit. The sheer size and slender nature of the stones, and their location on a small spit of land between the lochs of Stenness and Harray makes the atmosphere of the site quite special.

The Tomb of the Eagles is unique among prehistoric sites on Orkney in that the site is owned privately, whereas all other sites that I am aware of are maintained by Historic Scotland. The reason for this anomaly can be traced back to a loophole in the laws regarding ancient sites.

When the farmer who first discovered the cairn notified the authorities, they were slow to act on the information. So slow, in fact, that several years passed and nothing had been done to preserve the site. Under current law, the site became the property of the farmer. Now in some cases that legal lapse could have been a bad thing, but in this case the result has been a very positive one.

The custom built visitor centre is extremely good, with knowledgeable guides telling the story of the discovery and showing finds from the site. Unlike some visitor centres, which can be little more than dry museums, the Tomb of the Eagles encourages visitors to handle the exhibits, and there are a variety of interesting hands-on activities for adults and children.

The actual chambered cairn is no more (and certainly no less) fascinating than many other in Orkney, but the combination of the excellent visitor centre, the burnt mound, and the cairn, makes for a very satisfying excursion. Recommended for all.

Norse Mill, Isle of Lewis Prints
PUT THE BEST OF BRITAIN ON YOUR WALL