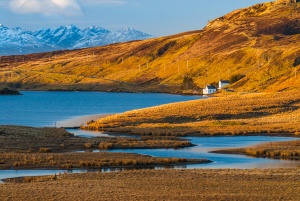 There is more to northern Scotland than just the Highlands; in this section of our Scotland Travel Guide, we take in the many islands that ring the west and north coast. These islands provide an unforgettable range of scenery and a pace of life that is distinctly different!

Isle of Skye and Lochalsh

Skye is known as the ‘Misty Isle’, a name seemingly custom made to attract tourists, as if the romance of the landscape and its history were not enough. Skye is famous for its association with Bonnie Prince Charlie, who fled here with the aid of Flora MacDonald, after the failure of his attempt to seize the crown in 1746. The Isle of Skye is a paradise for walkers, with the greatest collection of Munros (peaks over 3000 feet) in Scotland.

The scenery is spectacular, and the west coast, in particular, is noted for its splendid sunsets. On the mainland just south of the Skye Bridge at Dornie is Eilean Donan Castle, the most photographed and easily recognizable of Scottish castles. This is one of the Britain Express family's favourite regions in the UK, and we can't recommend it highly enough. 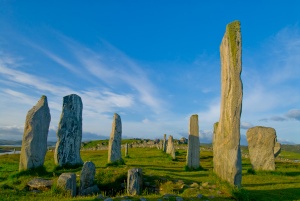 The term 'Western Isles' applies loosely to islands off Scotland's west coast, but more accurately it takes in what is sometimes called The Outer Hebrides. The isles of Lewis and Harris are the largest islands in the group, which includes Bura, St Kilda, and more. Curiously, given their far northern location, the Western Isles are a haven for surfers, offering some of the best water activity locations in Britain, with mile after mile of white sandy beaches, especially on the west coast.

The most famous attraction in the Western Isles is the stone circle at Callanish (Calanais). Perhaps second only in archaeological importance to Stonehenge, Callanish is a fantastic prehistoric monument composed of radiating avenues of stones about a core central circle. The stones stand in a marvellous location above Loch Rog an Ear, and if you are fortunate enough to have watched the sun set beyond the loch and paint the stones with a golden light you will never forget it. 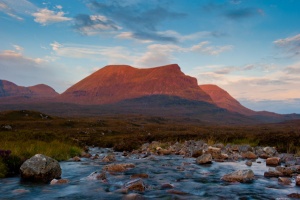 Sutherland bridges the gap between the capital of the Highlands, Inverness, and the far northern regions of Caithness, Orkney, and Shetland. Here there is lovely coastal scenery, but also large expanses of barren moorland.

The most famous and memorable attraction is Dunrobin Castle, home of the Dukes of Sutherland. This striking Scottish baronial mansion was rebuilt on the bones of a 12th-century house by Sir Charles Barry, the architect of the Houses of Parliament. The castle is painted white and can be seen for miles along the coast.

The gardens here are spectacular, but no less spectacular is the monument to the first Duke of Sutherland which stands atop a tall hill above the castle. The Sutherland monument can be seen for miles around. It was erected by the Duchess of Sutherland in memory of her husband. Oh, how sweet is love ... well, it may take some of the gloss off this romantic gesture to realize that the first Duke, under no little influence of his loving spouse, was one of the most despised offenders during the Highland Clearances. Sutherland cleared hundreds of his tenants off his land to make room for sheep. 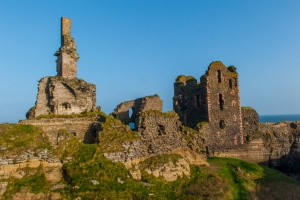 The most northerly region of eastern Scotland takes in the very tip of mainland Scotland. The most famous Caithness location is probably John O'Groats, noted as the furthest northern settlement in the UK. Today there is little enough to do at John O'Groats, but just a few miles away is the Castle of Mey, the former home of the late Queen Elizabeth, the Queen Mother. The Queen Mum bought Mey when it was due to be destroyed, and carefully restored it as a place where she could escape from the constant buzz and bustle of public life. Ferries leave from John O' Groats, Thurso, and Gills Bay for the Orkneys. 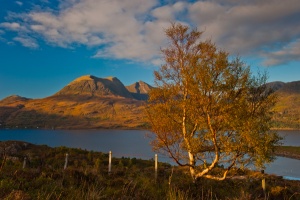 Often overlooked by visitors heading for the Isle of Skye, Wester Ross is the western region of the Ross and Cromarty District, an area that stretches from Lochalsh in the south to Sutherland in the north. In between is some of the most spectacular scenery in Britain, with fabulous walks and stunning coastal landscapes.

At the heart of the region is Inverewe Gardens, a stunning subtropical oasis of plants that thrive, sheltered by the warm Gulf Stream and the generally mild climate. One of the most scenic drives in Britain climbs the Pass of the Cattle to Applecross, then loops north to take in the southern shore of Loch Torridon. At Torridon is some of the best walking country in Britain, and some of the finest mountain scenery you could ever imagine. 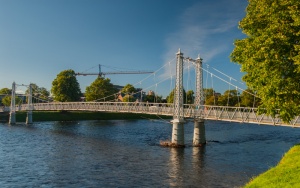 The River Ness at Inverness

Loch Ness needs no introduction to a generation raised on tales of a mysterious monster living in the murky depths of Scotland's largest body of water. Is there a Loch Ness monster? Well, no one really knows for sure, but that is part of the fun visiting this lovely Highland loch. Loch Ness stretches from Fort Augustus at the southwest almost to Inverness at the northeast.

There are two routes along the lake; the A82 along the northern shore is the most popular, but it can be crowded. The southern route, which is very narrow in places, travels along the shore through Foyers and its famous waterfall, past Whitebridge, where the single arch bridge built by the English General Wade to carry troops through the Highland glens still stands.

Cruises on Loch Ness leave from several points, most notable Fort Augustus, which fairly thrives on the Nessie legend. Also at Fort Augustus is the northern terminus of the Caledonian Canal, that astonishing engineering feat carried out by Thomas Telford to link Loch Ness to Fort William and the Atlantic beyond. Even today, crowds gather beside the canal lochs to watch as boats begin their arduous journey to the coast.

Halfway along the northern shore of Loch Ness is Drumnadrochit, where the striking ruins of Urquhart Castle stand on the shores of the loch. A few miles north is Corrimony Chambered Cairn, one of the best-preserved ancient burial mounds in Scotland. Travel just north of Corrimony to Glen Affric Forest Park, one of the prettiest of the Highland glens. Here, nature trails lead along the glen, and you can easily reach several striking waterfalls. Or just drive slowly along the narrow roads through some of the most spectacular scenery you are ever likely to encounter.

Just outside Inverness is the Culloden battlefield, where the dreams of Bonnie Prince Charlie ended in disaster. A modern visitor centre explains the causes of the conflict and how the battle unfolded. Just a few miles away is Fort George, a vast military fort built as part of the English attempt to control the Highlands after Culloden. Fort George was built with practicality in mind, but a more romantic note is struck by Cawdor Castle, where a live tree grows in the cellar of the medieval fortified house. 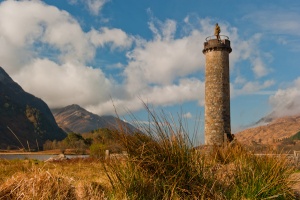 The Road to the Isles

The route north from Glasgow through Glen Coe leads through the western glens of the Scottish Highlands to Fort William, at the foot of mighty Ben Nevis, the highest mountain in Scotland. Perhaps Britain's most popular outdoor activity centre, Fort William lies at the eastern end of the spectacular 'Road to the Isles'; the route west to the Isle of Skye and the Western Isles (Outer Hebrides) beyond.

The road leads past the terminus of the Caledonian Canal, which links the sea to Loch Ness many miles away, past the medieval ruins of Inverlochy Castle, to Glenfinnan, on the shores of Loch Shiel.

There, on the shores of the loch, stand not one, but two, of Scotland's most memorable icons. The Glenfinnan Monument, a striking pillar, rises on the shore of the loch, to mark the spot where Bonnie Prince Charlie called the Highland clans to his battle standard for the ill-fated attempt to take the crown from George II. Inland from the monument, the Glenfinnan viaduct spans the glen, carrying the rail line from Fort William to Mallaig on the coast.

The Jacobite Steam Train takes regular journeys along the route in summer, and the sight of the steam-driven locomotive chugging across the viaduct is one of the most memorable sights in the Scottish Highlands.

A few miles further along from Glenfinnan stands a lonely cairn marking the spot where Prince Charlie left the mainland of Scotland for the final time. The Road to the Isles twists and turns along the coast, sometimes running side by side with the rail line, to the port of Mallaig, where regular ferry service links the mainland to the Isle of Skye. 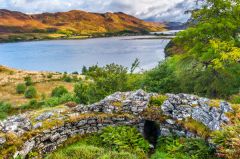 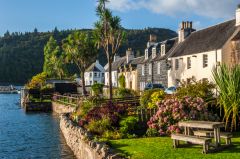 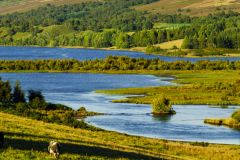 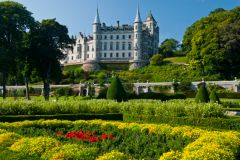 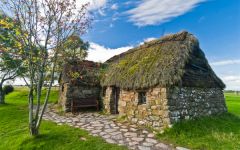 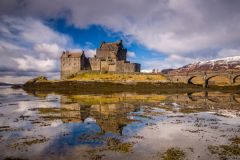 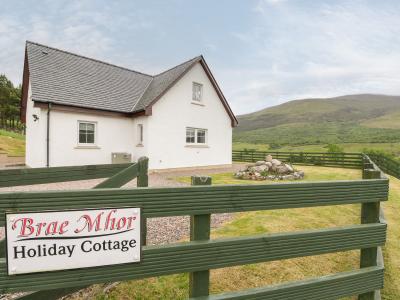 This detached cottage rests on the outskirts of Fort William, Highlands and can sleep six people in three bedrooms.
Sleeps 6 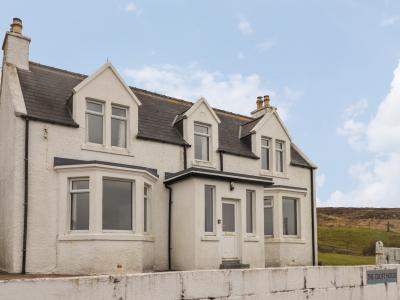 This detached cottage rests in Lower Milovaig near Glendale and can sleep four people in two bedrooms.
Sleeps 4