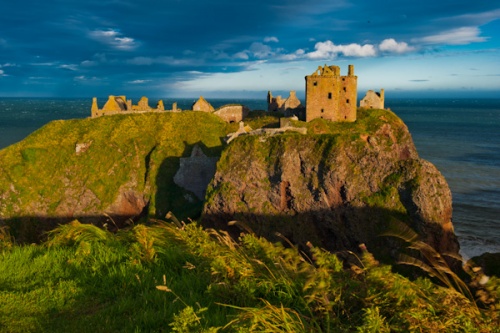 Is there a more dramatic, romantic castle in Scotland than Dunnottar? Standing upon a striking headland, surrounded by almost sheer cliffs on three sides, Dunnottar is not only one of the most beautiful medieval fortresses in Britain, but the site of some of the most fascinating and dramatic events in British history.

Over the turbulent centuries, it has been burned, rebuilt, and burned again. It has been besieged, visited by saints and queens, and been the setting for dramatic escapes. It has been a religious community, a fortress, a terrible prison, and the scene of one of the most famous episodes in the story of Scotland.

There may have been prehistoric settlements at Dunnottar, but the earliest historic record comes from the 5th century when the tireless Celtic saint Ninian established a church on the Rock of Dunnottar, one of the earliest Christian sites in Pictland. 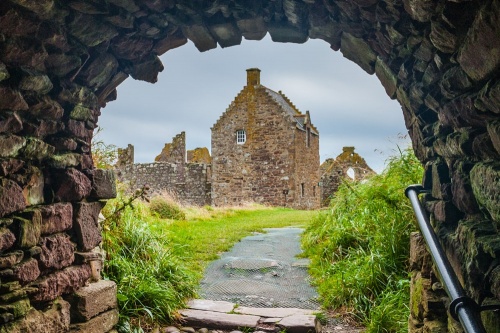 Ninian's church was just one of numerous that Scotland's first saint established across the country in a bid to spread Christianity throughout the north. Ninian's church was a simple timber structure built of wattle and daub, with outbuildings of timber and thatch.

The early Christian centre at Dunnottar grew and became incorporated into a Pictish fort and small settlement. In the late 9th century King Donald II defended the fort unsuccessfully against a Viking invasion, and the king was killed.

The fortress was rebuilt, not in stone, but in earth and timber. In 1276 a new stone church in Norman style was consecrated for worship atop the Rock, probably on the site of Ninian's chapel.

The Viking invasion was only the first episode of violence to descend upon Dunnottar. When Edward I made his bid for the Scottish throne Dunnottar once more became a pawn in the game of kings. 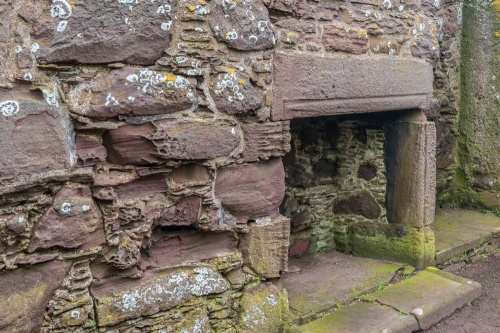 English troops occupied Dunnottar, but a Scottish force under William Wallace captured the castle. The English took refuge in the church, but Wallace burned the church with the soldiers inside and destroyed the castle. Several windows of the 13th-century church burned by Wallace still survive in the current chapel ruins.

In 1336 the English were back; when Robert I died, Edward Baliol made a bid for the throne with the aid of English troops. Edward occupied the castle and almost immediately began to strengthen the defences. The Scots retook Dunnottar and once again burned it to the ground!

By the end of the 14th century, Dunnottar was owned by the Keith family, Great Marischals (Marshalls) of Scotland. Sir William Keith built the first substantial stone defences at Dunnottar, including the curtain wall surrounding much of the clifftop site, and the stone keep.

King James IV visited Keith at Dunnottar in 1503, and his granddaughter, Mary, Queen of Scots, came here twice, in 1562 and again in 1564 when she was accompanied by her young son, the future James VI. James returned in 1580 and spent 10 days here, hunting and presiding over his Privy Council. His host was Sir Wiliam Keith, the 4th Earl, who was known as 'William O' the Tower' because he seldom left his own tower house!

In 1595 an unfortunate man named John Crichton was sentenced to death for witchcraft and was burned to death at Dunnottar.

The 7th Earl Marischal joined the cause of the Covenanters in 1639 and fought with the army of the Marquis of Montrose in the taking of Aberdeen. In 1645 the fiery Montrose reappeared at the head of a royalist army, having dramatically switched sides. Montrose tried to negotiate, but the Earl refused to treat with his former ally. Montrose then burned the castle and laid waste to the entire region. 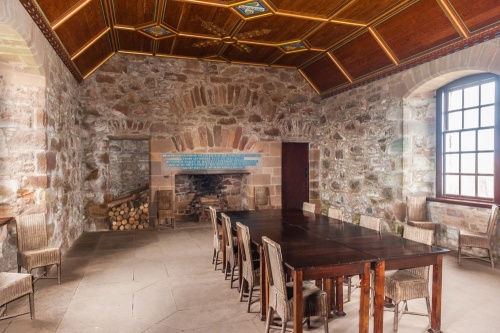 But the most dramatic event in the history of Dunnottar was yet to come. Charles II stayed at Dunnottar at the beginning of his attempt to wrest the throne from Parliament. He was crowned at Scone, in a ceremony that included the Honours of Scotland; the Scottish equivalent to the Crown Jewels of England.

The Honours were the most potent symbol of Scotland's monarchy and consisted of a court crown, a ceremonial sword, and a sceptre. The Honours would normally have been returned to storage at Edinburgh Castle, but Oliver Cromwell seized Edinburgh, so the Honours were sent to Dunnottar Castle for safety. Cromwell was determined to destroy the Honours as he had destroyed the English crown jewels.

The Earl Marischal was taken prisoner by Cromwell, so the defence of Dunnottar was entrusted to Sir George Ogilvy of Barras. In September 1651 English troops appeared at Dunnottar and settled down to a long siege.

The garrison of 69 men held out through the long winter. By May 1652 Dunnottar Castle was the only place in Scotland where the royal flag still flew. But the English brought in heavy guns and began to bombard the castle. For 10 days the guns roared, and the number of defenders dwindled. Finally, after a siege lasting 8 months in total, Ogilvy surrendered Dunnottar to Cromwell's men.

But where were the Honours of Scotland?

Search as they might, Cromwell's men could not find them. They had been secreted away, right under the noses of the English army.

There are several versions of how the Honours were saved. One version says that the English allowed Mrs Grainger, wife of the minister at Kinneff, a few miles down the coast, to enter the castle on compassionate grounds. Mrs Grainger then carried out the Honours under her skirts.

Another version says that the Honours were lowered down the cliffs in a basket, to Mrs Grainger's serving maid, who was pretending to gather seaweed by the shore. The maid then hid the Honours in a creel, covered by dulse, and carried them out under the noses of the English troops.

They were hidden at the bottom of the Grainger's bed and then secretly buried in the church at Kinneff, under the floor near the altar. Every few months the minister and his wife dug up the Honours and aired them out before a fire.

The English were understandably enraged, and they wreaked havoc upon the castle. The chapel was destroyed, and the Ogilvys imprisoned. Mrs Ogilvy died from her ill-treatment, but Sir George survived, and never divulged the whereabouts of the Honours. 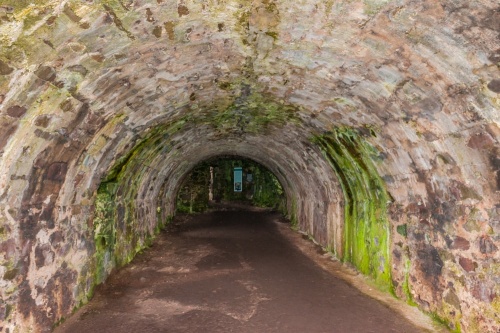 But that was not the final chapter of Dunnottar Castle. Though the Keep was in ruins and the great hall destroyed, enough remained that the castle could still be used as a barracks. In 1685 religious turmoil was at its height, with the authorities severely repressing every vestige of Presbyterianism.

One hundred and sixty-seven men and women who refused to accept the new prayer book and acknowledge the king's supremacy in spiritual matters were marched to Dunnottar and interred in a damp, dark cellar which has since become known as the Whig's Vault.

There they were kept in dreadfully cramped conditions, with no sanitation, for 5 long weeks, until the end of June. Some of the 'Whigs' relented and took the oath of allegiance. Others tried to escape; 25 managed it, but 15 of these were recaptured.

Two fell to their deaths while attempting the descent. The remainder were transported to the West Indes, but of these fully 70 died on the voyage or upon arrival. A simple stone memorial to the Covenanters stands in the churchyard at Dunnottar parish church, on the outskirts of Stonehaven.

Modern visitors can descend to the Whig's Vault and marvel that any of the Covenanters at all were able to survive confinement in such a dark, damp, cramped space.

In 1695 the 9th Earl Marischal managed to regain Dunnottar for the Keiths. But after 44 years as a barracks, Dunnottar was no longer suitable as a family home. The 10th Earl Marischal then made a fatal error in judgement; he joined the abortive 1715 Jacobite Rebellion in favour of James VII and II.

The Earl welcomed James to his house at nearby Feteresso Castle, but the Rising was doomed from the start and both James and the Earl had to flee to France. George I seized his estates, including Dunottat. The castle was sold to the York Building Company, who stripped it bare. Many years later the Keiths regained Dunnottar, but it was not until 1925 that any serious effort was made to arrest the decay of centuries. 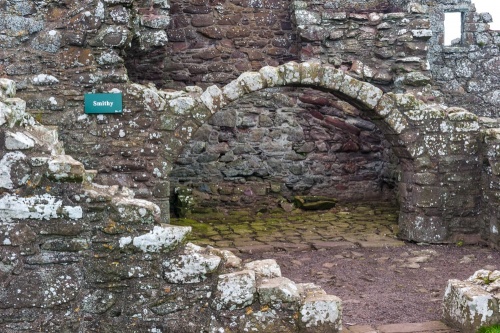 Today visitors can visit a range of buildings, including what remains of the chapel and Earl's hall, stables, smithy, storehouse, barracks, and the early stone keep, or tower house. You can also visit the Whig's Vault and a restored Drawing Room.

The remains are really quite extensive, considering how much the castle has been through! Almost all the buildings are in ruins and roofless, however, with the exception of the restored Drawing Room.

But what makes Dunnottar so amazing to visit is the location; it is the most evocative and romantic location imaginable. There are walks along the cliffs in both directions and if you are moderately agile you can get down to the shore on either side of the headland for amazing views of the Rock.

Dunnottar is signposted off the A92 about 2 miles south of Stonehaven. There is a parking area and a 1/4 mile walk to the top of the cliffs. From there you get some exercise, with over 200 steps down to the base of the cliffs and then back up to the Gatehouse entrance point. Ther are benches part-way down to pause and rest, however. 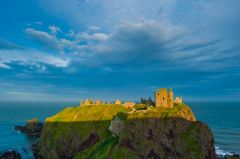 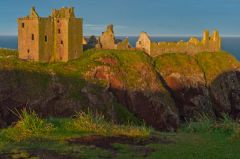 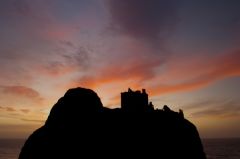 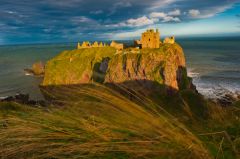 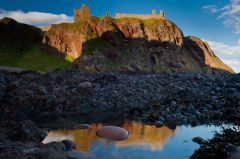 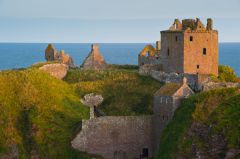 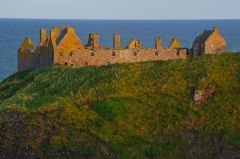 More self catering near Dunnottar Castle 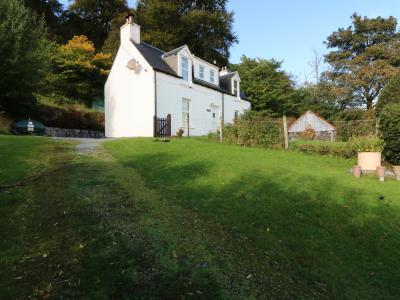 This traditional croft house is situated in the Scottish Highlands of Letterfearn with views out over the Loch, and can sleep four people in two bedrooms.
Sleeps 4

This cottage is situated in the village of Balallan near Kershader, and can sleep nine people in five bedrooms.
Sleeps 9