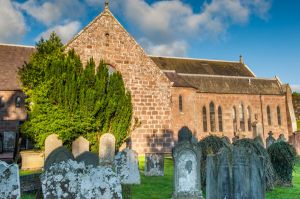 Dunnottar Church and Marischal Aisle
In a secluded spot in Dunnottar Wood, on the outskirts of Stonehaven, stands historic Dunottar church. Hang on, what is Dunottar church doing so far from Dunottar itself? For the answer to that question, we have to go back in time to the 5th century, when St Ninian founded a church on the windswept headland known as the Rock of Dunnottar, two miles south of Stonehaven.

A great stone fortress was later erected on the headland, and the church was incorporated into Dunnottar Castle. The castle was besieged several times, most notably by William Wallace in 1297. In 1394 Sir William Keith, the powerful Earl Marshall of Scotland, decided that it made more sense to build a new church, away from the military activity at the castle. He chose this wooded spot outside the port of Stonehaven.

That church, dedicated to St Brede, was rebuilt in 1593 and again in 1782 when it was replaced by a much larger structure. It was extended in 1869 and restored in 1903 to give us the church we see today. Note that the Royal Commission on Ancient and Historic Monuments in Scotland suggests that the first church was not built on the Rock of Dunnottar but on the site currently occupied by Dunnottar House gardens.

There are two intriguing historic features at Dunnottar Church. Luckily, these can be viewed without having to go inside the church, which was locked when I visited. 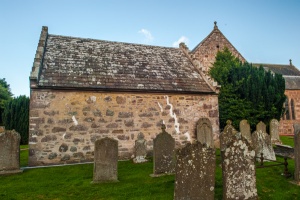 The first historic feature is the Marischal Aisle, a free-standing burial aisle to the south-east of the main church. The aisle was built in 1582 by the 5th Earl as a burial place for himself and subsequent generations of the Keith family. The Marischal Aisle is a simple rectangular building with traditional stepped gables. Within the building are fragments of carvings, including three armorial panels, that may have come from the medieval church here.

A few steps from the Aisle is a simple memorial called The Covenanter's Stone. This memorial commemorates those who died in one of the's darkest episodes in Scottish history. In 1685, in a fervour of religious turmoil in Scotland, 167 Presbyterian dissenters were imprisoned in Dunnottar Castle because they would not recognise the king's pre-eminence in religious affairs. 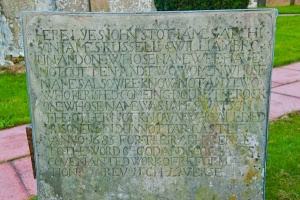 These 'Whigs' were held terrible conditions in a cramped cell that became known as the Whig's Vault. Not surprisingly, some of the so-called Covenanters relented their stance, but others died in the terrible conditions. Others were eventually deported to the West Indies, but over 70 of them died on the voyage. Twenty-five made good their escape by somehow scaling the sheer cliffs on the Rock of Dunnottar, but two died in the attempt.

The Covenanters Stone commemorates nine of the prisoners, five of whom are named but others 'we know not'. The inscription tells a moving tale:

'Here lies John Stot, James Atchison, James Russell, and William Brown and one whose name we have not gotten and two women whose names also wee know not and two who perished comeing downe the rock one whose name was James Watson the other not known who all died prisoners in Dunnottar Castle anno 1685 for their adherence to the word of God and Scotland's covenanted work of reformation. Rev II Ch 12 Verse.'

One source suggests that the names of those missing from the inscription are John White, Marie Gipsone, William Breadie, and Jeane Muffet.

The Covenanters Stone is easily identified; it is a light coloured stone and has a wooden sign on the rear. It is a mere matter of steps from the west gable of the Marischal Aisle.

There is a lane to the church, which is well signposted, but parking is in a signed area in Dunnottar Wood, a hundred yards or so from the church. 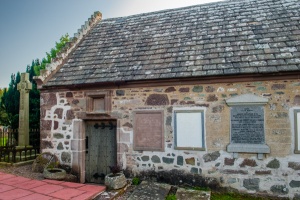 The front of the Marischal Aisle 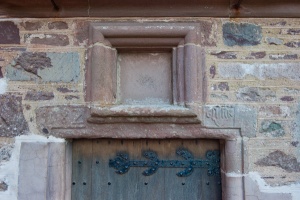 Plaque over the door 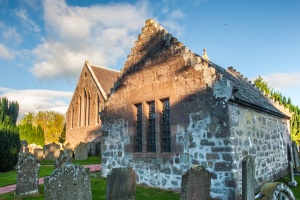 The Marischal Aisle and the church 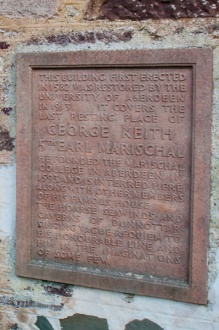 Marischal Aisle plaque
beside the door 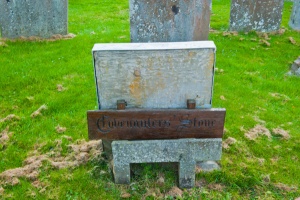 Rear of the Covenanter's Stone 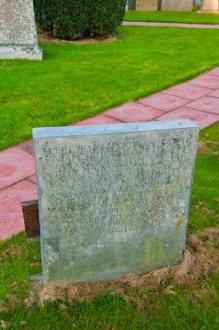 The front of the Stone

More self catering near Dunnottar Church and Marischal Aisle >>

More bed and breakfasts near Dunnottar Church and Marischal Aisle >> 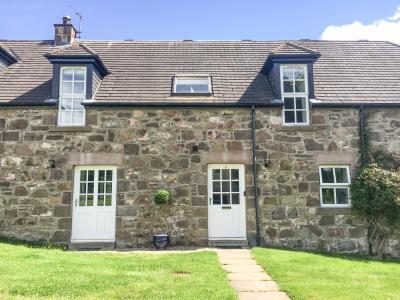 This cottage is situated close to the village of Stonehaven, near Aberdeen, and can sleep five people in two bedrooms.
Sleeps 5