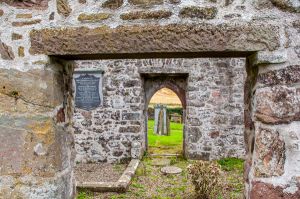 The old church at Kirktown of Fetteresso was founded in 1246 by Bishop David de Bernham of St Andrews. It would later become the mother church for nearby chapels at Dunnottar and Cowie. The Fetteresso church was dedicated to Ciaran (Kieran), a 6th-century Irish saint with links to the Mearns area.

Traditionally, the church is thought to stand on the site of the original church established by St Ciaran (515-549) himself. This possibility is supported by the presence of an old holy well called St Ciaran's Well below the Glenury railway viaduct. The location of the church at the extreme southern edge of the parish suggests that the site may have been chosen because it was already a sacred site from an earlier time.

When the last Episcopalian minister of Fetteresso died, locals tried to prevent Presbyterian ministers from taking his place. In 1707 the newly ordained minister complained that he could not get near his new church "by reason of a rabble of women".

The roofless church we see today was built in 1720 to replace the earlier medieval church on the site. It is shorter than the earlier building, but with the addition of a north aisle. The church probably had a vault and a laird's loft opposite the pulpit.

One of the best surviving features is the stone belfry, dated 1737. The new 18th-century building did not stand the test of time; by 1794 it was deemed outdated and 'unfit to contain the congregation'. In 1812 a new church was completed on Bath Street, its remarkable turreted exterior apparently modelled on the tower house of Fetteresso Castle.

Just inside the south door is the last medieval feature; a reused holy water stoup. A hogback tombstone dated to around AD 980 was found in the old church; it probably served as a baptismal font in the medieval church. It has since been removed to the new church in Fetteresso.

To the south of the churchyard are several interesting 18th-century table tombs, but even more interesting is the marble monument to the local Duff family, located on the northeast wall of the church interior.

A short distance from the kirk, amid the woodlands beside the River Carron, stand the ruins of Fetteresso Castle, where James Stewart, The Old Pretender, was proclaimed king in 1715, launching the abortive First Jacobite Rebellion. 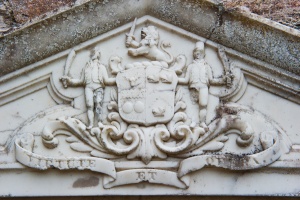 Coat of arms on the Duff family memorial 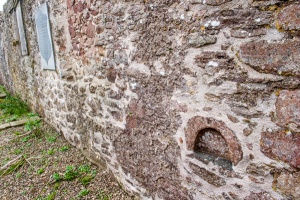 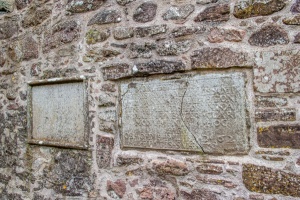 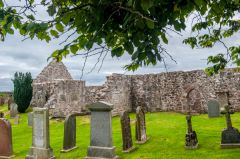