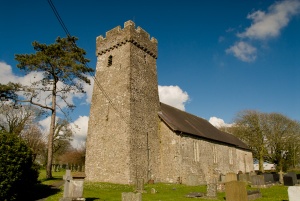 Wizo the Fleming was one of the powerful Norman lords who took control of southern Wales in the decades following the Norman Conquest. Around 1112 Wizo took the lordship of Daugleddau. He later seized land for himself in Lanarkshire, Scotland. He must have had the most widely separated estates in all of Britain at that time!

Sometime before his death in 1130 Wizo erected a motte and bailey fortification here, reusing existing Iron Age earthworks. He also founded a church at the same time. Though altered by subsequent generations, the church is essentially a Norman building, entered by a very simple doorway made of large slabs of local red sandstone.

The stolid tower is very simple, crenellated with an extremely simple parapet. Notice the very slender lancet windows let into the tower walls. Obviously the Norman architects were very worried about the possibility of attack! 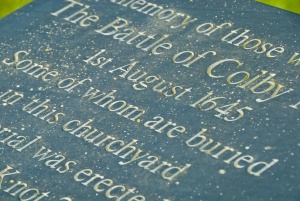 Inside the porch are three very worn grave slabs to David Lloyd of Kilkethed and his family (d. 1631). Inside the church, perhaps the most interesting feature is a large Norman font, square, with scalloped under-edges, supported on a very large central column. The chancel arch is very simple; pointed, with two orders of moulding and unadored capitals. Aside from that, the interior is unremarkable, though lit with some very attractive Victorian stained glass.

The other item of historic interest at Wiston is a modern memorial in the churchyard. Erected by the Sealed Knot Society in 2003, the memorial remembers the soldiers who fell at the Civil War Battle of Colby Moor on 1 August 1645. Many of the dead were brought to Wiston after the battle and buried in the churchyard.

St Mary's is not a compelling historic church, but it is interesting, and well worth exploring as part of a visit to the castle. 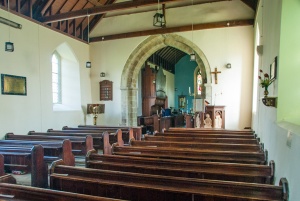 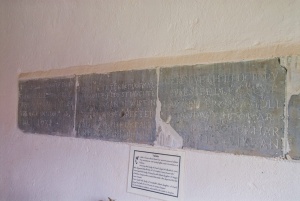 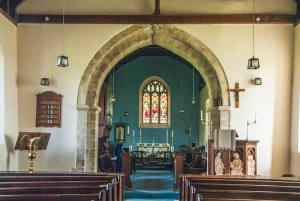 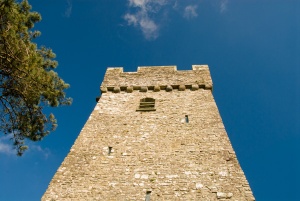 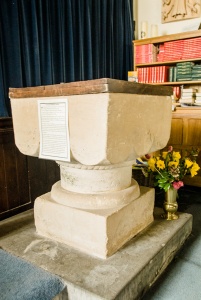 More self catering near Wiston

More bed and breakfasts near Wiston

Self Catering near Wiston