The heritage coast reaches 40 miles from Caldey Island, near Tenby, to Angle Bay in the Milford Haven estuary. The area is also included in the Pembrokeshire Coast National Park. Tenby can justly claim to be one of Pembrokeshire's most popular holiday resorts, but in general, the coast is blessedly free of crowds, especially in May and September.

The sandy bays near Tenby quickly give way to more rugged scenery to the west. The cliffs are sheer and rugged, but provide excellent walking along the Pembrokeshire Coast Path.

Just south of Tenby is Caldey Island, which lies one mile off Giltar Point. The island is owned and farmed by a small community of Cistercian monks, and can be visited via a 20-minute boat trip from Tenby. The monks provide guided tours of their monastery (for men only!) and there is excellent walking and great views along the coast. St. Illtyd's Chapel houses an ancient Irish ogham stone within its walls.

Back on the mainland, the village of Manorbier is the home of Manorbier Castle, the 12th-century fortification that was the birthplace of Geraldus Cambrensis, medieval scholar and tutor to both Richard I and King John. The castle is open from Easter to September. Nearby are the Neolithic standing stones of King’s Quoit. 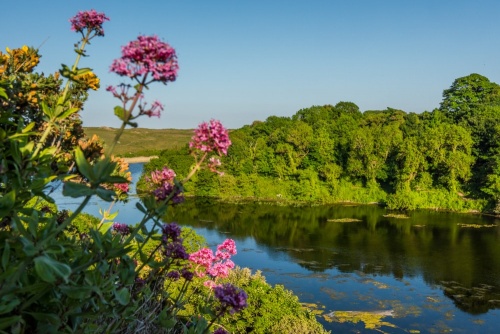 For a real treat, try the steep climb down the cliffside to St Govan's Chapel near Bosherton. The chapel is an amazing medieval relic clinging to the rugged rocks halfway down the cliff. There was at one time a holy well near the chapel, but the well has since dried up.

Legend has it that the chapel was founded when St. Govan hid in a rocky fissure of the cliff to escape from pirates. A further legend states that King Arthur's knight Sir Gawain lies buried beneath the stone altar of the chapel.

Bosherton, just inland from St. Govan's Head, is famous for its freshwater ponds, home to lilies which bloom in June. The ponds are manmade, created in the 18th century, and the effect when the lilies are blooming is strikingly beautiful. There are woodland paths around the ponds.

Marloes and Dale Heritage Coast
The cliffs along the heritage coast are generally rugged, but there is a good sandy beach at Marloes Sands. The Sands are a Site of Special Scientific Interest (SSSI) due to the steep cliffs of Silurian rocks that fringe the beach. The heritage coast includes Skomer Island, a nature reserve famous for its large puffin population and bird breeding areas. More ...