The heritage coast stretches 50 miles, following the rugged contours of St. David's Peninsula from St. Brides Bay to Fishguard. The peninsula blends history and scenery to better effect than just about any area of Britain.

The peninsula is composed of low, gentle hills, but the coast is strewn with jagged rocks below sharp cliffs, with treacherous tides and strong winds common companions. So sharp and continuous are the rocks along the cliffs that there is no landing place along the north coast of the peninsula until you reach Aber-Eiddy, six miles from St. David's Head.

St. David's has been a place of Christian pilgrimage since the Middle Ages, when two journeys to St. David's equalled one journey to Rome. Most pilgrims were drawn to the shrine of St. David in the cathedral that bears his name.

A ruined chapel in the lifeboat station at Porthstinian marks the burial place of St. Justinian, a contemporary of St. David. Just off the coast here lies the nature reserve at Ramsey Island, and seabirds in large numbers breed along the cliffs.

Even before David founded his church here in the early 6th century, the area was a gathering place for Celtic monks, but even the Celts were relative newcomers to the peninsula, which abounds in prehistoric remains.

At Carreg Samson a Neolithic burial chamber overlooks the cliffs, and there is a large earthwork near Trefasser. There is a holy well dedicated to Non, mother of St. David, at St. Non's Bay. 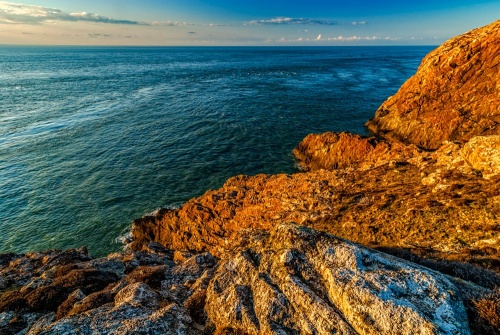 St. Brides Bay Heritage Coast
St. Brides Bay is an area of high cliffs and broad, sandy beaches, popular with holidaymakers in the summer months. Despite this, there are secluded pockets along the coast that seem to have escaped the towel and bucket brigade. More ...