The heritage coast begins at Dale, at the head of the Milford Haven Estuary. Dale is now a popular sailing centre, but its' moment in the spotlight of history occurred in 1485, when Henry Tudor landed here on his way to confront Richard III at the Battle of Bosworth.

The Field Study Centre at Dale Fort provides an opportunity to explore the unique ecology of this area before heading out to walk the coast. At the tip of the Great Castle Head lies an Iron Age fort.

Another promontory with a history is St. Ann's Head, just south of Dale. Rumour persists that the name was chosen to honour Anne Boleyn more than any saint.

The cliffs along the heritage coast are generally rugged, but there is a good sandy beach stretch at Marloes Sands. The Sands are a Site of Special Scientific Interest (SSSI) due to the steep cliffs of Silurian rocks that fringe the beach.

Skomer Island is a nature reserve famous for its large puffin population. Half a million seabirds nest here each year. If you visit in spring or summer the coastal wildflowers create a colourful backdrop for the remarkable collection of bird species.

Frequent boat excursions to Skomer leave Martin's Haven near Marloes from April-October. Nearby Grassholm Island harbours a large gannet colony, and both islands are home to grey seals, dolphins, and porpoises.

At the tip of the Marloes Peninsula is a deer park owned by the National Trust. A walk through the park brings you to cliff tops overlooking rocky beaches where seal pups are born in the autumn and winter. 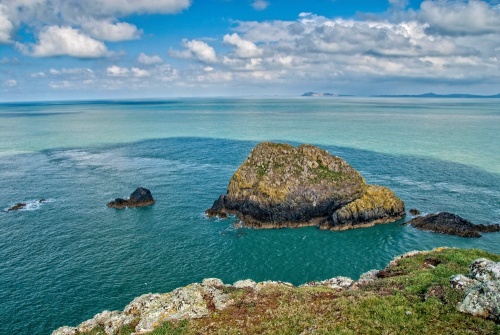