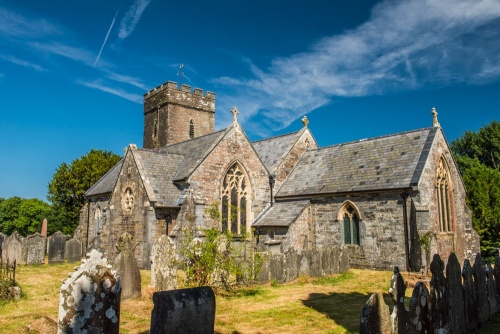 Just a short stroll west of Cilgerran Castle in north-west Pembrokeshire stands the early medieval church of St Llawddog. We do not know precisely when it was built but the church is mentioned in tax records from 1291. In the 19th century, several stone-lined cist burials were discovered in the churchyard, with 13th-century coins inside the burial cists.

Local tradition says that the church has stood on this site since the 6th century.

Llawddog was a 6th-century Celtic hermit. according to a rather imaginative 16th-century biography he was one of a dozen sons of Dingad, King of Usk. Llawddog turned his back on his father's worldly life and with one of his brothers, became a religious hermit. He served as abbot of a monastic community and may have ended his days on Bardsey Island, the 'Island of the Saints' off the Lleyn Peninsula.

Most of the present building dates to not one, but two Victorian restorations. The medieval church was rebuilt in 1836 by architect Daniel Evans, who swept away the medieval timber roof, carved rood screen, and chancel window. Evans' restoration was of such poor quality that just 15 years later it had to be completely redone by Benjamin Ferrey of London. 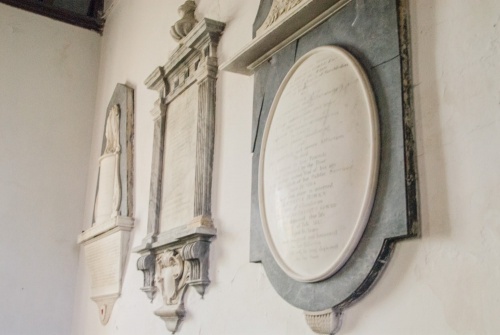 The church consists of a nave, chancel, south aisle, and 13th-century west tower, the oldest part of the building. A north vestry and south organ chamber were added in 1865, and a west doorway in the 20th century.

Though perhaps not blessed with a wealth of historical interest inside the church, it is still worth visiting as a very good example of the Ecclesiological Gothic style, with every aspect copied from the Decorated Gothic style so prevalent in the 14th century.

The pulpit is of Bath stone, with a richly carved font of the same material. The reredos was installed in 1877 and was designed by EB Ferrey. Most of the stained glass is 19th-century work, dating from 1854 (east window) to 1860 (north nave).

There are numerous 16th-18th century memorials inside the church including a 1560 tablet to Thomas Phaer of Fforest Farm. Phaer is best known for writing 'The Boke of Chyldren', published in 1545, the first book on paediatrics in the English language.

Another memorial is to John Roland Phillips, a native of Cilgerran who went on to become a magistrate in West Ham, London. Phillips wrote a series of popular histories of Cilgerran, Cardigan, & Glamorgan, the Sheriffs of Pembroke, Cardigan & Carmarthen, the Civil War in Wales and the Marches.

Look for a wall memorial to Griffith Griffith, a naval surgeon who died when his ship went aground off the Irish coast in 1822. One of Griffith's voyages was aboard the Queen Charlotte on a voyage to Algiers that liberated 2000 people from slavery. He also served aboard the Shearwater, part of the squadron that guarded Napoleon Buonaparte during his exile on St Helena.

Much older is a slate memorial to John Loyd of Kilrhiwel, who died in 1657 at just 37 years old. 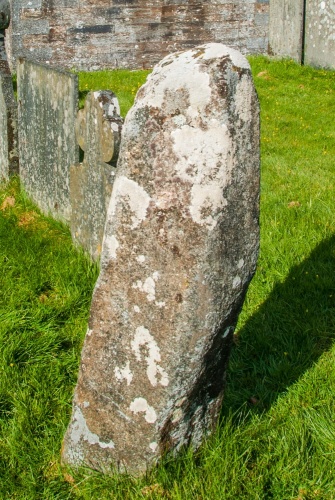 In the churchyard is a 5th-6th century Ogham stone. It is easy to find; on leaving the church turn left and you will see the stone in the second row of graves. You can clearly make out the Ogham incisions on the stone, though they are very worn. The carvings have been translated as 'Here lies Trenegussus the son of Macutrenus'.

Ogham was a script found primarily in Ireland, Scotland, and Wales from the 1st to the 6th centuries. Most Ogham is in the form of a genealogical commemoration, such as 'X son of Y', carved as a series of short and long incisions, or notches, on the edge of a stone slab.

Ogham can be translated fairly accurately because some stones also had a Latin equivalent, enabling historians to compare the two versions. This is true of the Cilgerran stone; you can clearly see both Ogham notches and Romano-British Latin script. 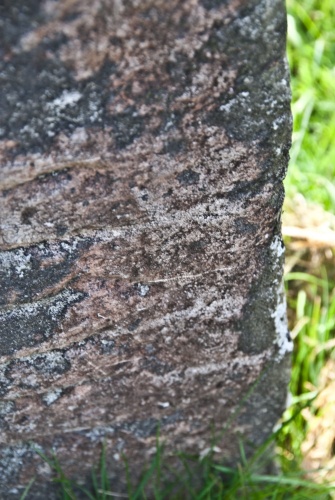 Also in the churchyard is the grave of William Logan, the first Director of Geological Survey of Canada and the man for who Mount Logan is named. Logan was also responsible for mapping the coal mines of South Wales. He died at his sister's home in Cilgerran and the memorial was erected on the centenary of his death in 1975.

Though most people will visit Cilgerran to see the atmospheric ruins of the medieval castle it is well worth a stroll to St Llawddog's Church, if only to see the Ogham stone, and if you are interested in Victorian architecture the church is a perfect example of the Ecclesiological movement style.

St Llawddog's Church is very easy to find. It is located on Church Street, at the western edge of Cilgerran village, a few minutes walk from the castle. The easiest access is from the west, off the A478. 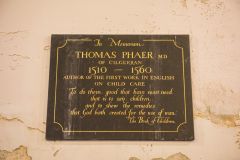 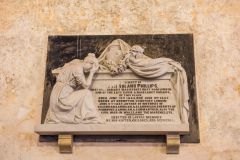 Self Catering near Cilgerran