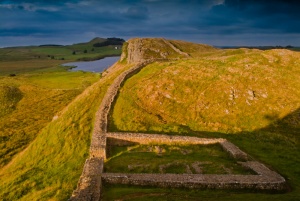 Advance and retreat
In the late first century AD, the Romans pushed gradually northwards. Sometimes they were driven by the need to keep secure their frontiers, sometimes by the desire of their leaders to acquire prestige through conquest. By the early years of the 2nd century, they were well into modern Scotland, but the combination of events elsewhere in the Empire and the untimely death of Emperors led to the withdrawal of troops to the line we now know as Hadrian's Wall, stretching nearly 125 kilometres from Newcastle to Carlisle.

Consolidation
In terms of major political changes, the next few centuries were pretty dull. In some ways, Britain was a quiet backwater of the Empire. The administration of the province of Britannia underwent several bureaucratic reorganizations. Leadership of the army stationed in Britain served as a springboard for several generals to claim the Emperorship (in one year no less than three claimants to the Imperial throne were put forward by the Legions in Britain).

Invasions
Beginning in the 3rd century Britain was subject to raids on its frontiers by Saxon pirates. This eventually led to the establishment of a string of Roman forts stretching from Norfolk to Hampshire along the "Saxon Shore". This also had the effect of stretching the troops in Britain very thin. Over the centuries events elsewhere in the Empire had gradually lessened the number of troops available in England, and in 367 an alliance of Scots (from Ireland) and Picts from modern Scotland wreaked widespread havoc in the north.

The End of Roman Rule
It is terrifically tempting to assign a specific date to the end of the Roman occupation in Britain. It is also misleading. Over time troops were gradually pulled out of Britain to deal with emergencies elsewhere. The final legionary probably left Britain in 409. There is evidence of some form of Roman administration for several decades after that. Certainly by 450 England had ceased to be part of the Empire. Given the state of the Empire at that time it is perhaps as well.