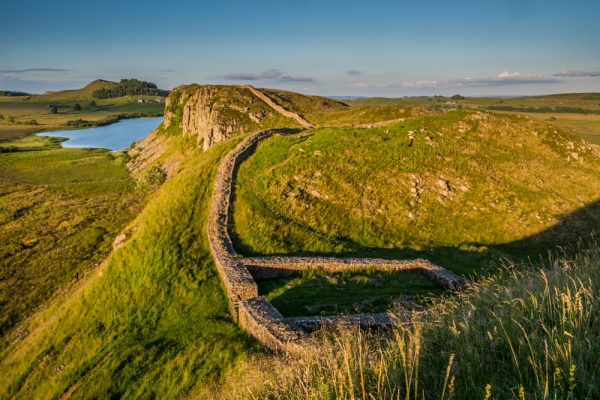 The most famous Roman remain in England is Hadrian's Wall. It is not by any stretch the most northerly point of the Roman advance; they reached as far north as modern Aberdeen. It isn't even the most northerly wall built by the Romans in Britain. That honour goes to the Antonine Wall, an earthwork defence between the firths of Clyde and Forth. It is, however, an impressive engineering feat, and well worth visiting.

Emperor Hadrian
Emperor Hadrian came to the imperial throne in 117 A.D. He decided that the Empire needed securing, not expanding, and in 122 he gave the order to build a wall across the northern frontier. Build it they did; eighty miles worth, following the northern escarpment of the valleys of Tyne, Irthing, and Eden between Newcastle and Carlisle.

Construction
The original construction took six years to complete, during which time plans were altered several times. The building was done by members of three vexillations - temporary legion subunits - working from east to west, and it has been estimated that they used more than a million cubic metres of stone in its completion. This was not a weekend project. The wall was manned until sometime around 400 A.D.

Forts along the Wall
The wall itself was eight to ten feet wide and fifteen feet high, with a rampart walk and six-foot-high parapet. There are over 80 mile forts spaced, yes, every mile, with a kitchen and barracks for a small garrison. In between the mile forts two observation towers were built, resulting in lookouts every third of a mile for the entire length of the wall.

In addition to the mile forts, there were seventeen larger forts holding from 500 to 1000 troops, infantry or cavalry, or a mixture of both. These forts were built into the wall, with large gates on the north face flanked by stone towers.

The Ditch
To the south of the wall, the Romans dug a wide ditch, or vallum, with six-foot-high earth banks. Why a ditch to the south when the threat was to the north? Most likely the Romans were afraid that the Brigantes tribe of northern England might join with the tribes of Lowland Scotland to make trouble. This way troops manning the wall could control, or at least observe, traffic going both directions. It is just as well, for the Brigantes remained rebellious long after Britain was nominally in Roman hands.

Civilian settlements
One other point of note about the wall concerns the growth of civilian settlements close to the major legionary forts, to the south of the ditch. These settlements, or vici, sprawled in unplanned confusion, in contrast to the regulation army forts.

In the later years of the Empire, when the wall was allowed to lapse, it appears that some of the civilians moved into the forts. Finds have been made of women's rings inside the barracks area. Several possible reasons for their presence come to mind, but the least said about that, the better.

Where to visit
The central sections of the wall remain in good condition and worth visiting. The forts of Chesters, Corbridge, and Housesteads offer good viewing, while the section of wall between Housesteads and Great Chesters is the most wildly evocative in terms of scenery. There are several sections where the Wall is very well preserved, notably near Cawfields, Gilsland, Birdoswald, and Haltwhistle. There are forts at Sewingshields and Vindolanda, and a restored Mithraic temple at Carrawburgh.

The Hadrian's Wall National Trail now follows the course of the Wall through fabulous countryside, giving visitors the opportunity to walk in the footsteps of the Roman legionnaires who manned this outpost of the Roman Empire so many years ago.

MORE Roman Britain:
Back: Life in Roman Britain
Next: The Temple of Mithras
Also see Roman London in our London History section.

This king of England died in exile in France in 1701